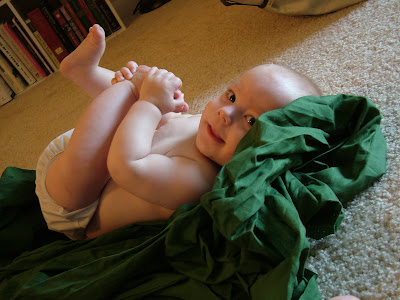 Marko is six months old already -- in fact, has been for over two weeks now! Time sure does fly, and he grows so fast. It's definitely time for an update.

I do not know his height or weight, but he's definitely growing and in mostly 6-9 month clothes now. He easily rolls from back to front, which until recently was his main mode of transport. But earlier this week he began army crawling and is now capable of chasing the cat (at low speed) around the living room. Also of scootching to her food dish and dumping it out, of scootching to computer cords and trying to chew them, and of scootching over to my leg and grabbing my pants. Right now he's entertaining himself by clicking on the laptop's trackpad so that my cursor goes all over my post and I start typing in the middle of a word. Please blame him for any incoherence in this post. 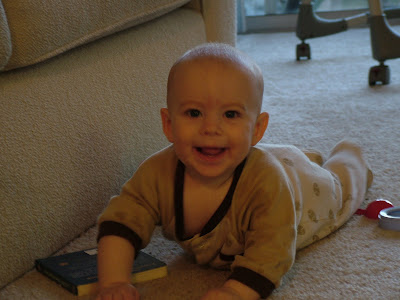 He also sits up, quite securely. Once he threw himself backward while sitting (why?!) and bumped his head on the carpet, but other than that he's had no mishaps. He tips to the side when he wants to get down, but it's a controlled fall so he's never hurt.

We introduced solids food a little before six months. Well, okay, it's a little inaccurate to say we introduced food. Actually, he stole the carrots out of my beef stew. I let him because I figured if he could do it himself, he was ready. He's taken to food very well. I don't spend a lot of effort on solids; on the average I give him one "meal" a day, and sometimes we skip it. I think it's best to start gradually. He loves it -- a meal in his high chair is the sure way to nip a whiny afternoon in the bud. However, it's also a sure way to guarantee we have to take a bath: 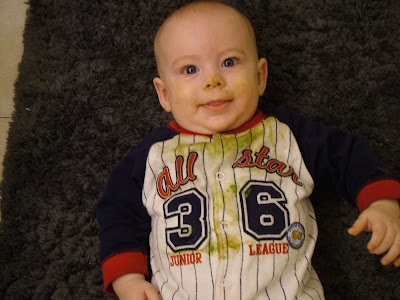 The time I gave him refried beans, it was even worse! However, the downside of avocado is that it stains ... that outfit will never be the same.

In keeping with the guidelines of baby-led weaning, I've been giving him food he can hold himself and put into his mouth. Practically speaking, that generally means a long and narrow piece of food so he can hold it in his fist and put the end in his mouth. It has to be just the right consistency -- too hard, and he gets frustrated when he can't get a bite of it easily; too soft, and he just squishes it to death in his fist. So I often include foods with peel when possible -- he can hold onto the peel and chew the food off of it. 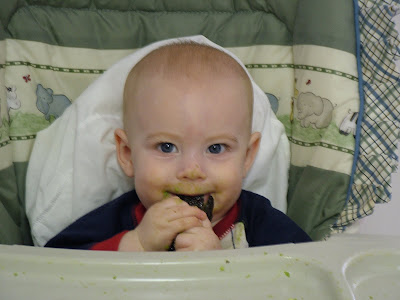 That's an avocado peel you see there. He had a GOOD time with that. I think it might be his favorite food.

So far we have introduced carrots, avocado, refried beans, sweet potatoes, and banana. I also gave him yogurt once, off a spoon, but he got odd dry patches on his face the next day, so I decided to be safe and discontinue it for now. I tried giving him liver, but he just poked at it -- I'm not sure he recognized it was supposed to be food.

We will be waiting a long time before giving him any grains, seeing Daddy's reaction to them. I'm hoping to get some meat in him soon, though, because nothing we've given him so far has been very high in iron.

His favorite foods are banana peel and paper -- specifically, tardy slips I get at school. He is always grabbing them and trying to eat them!

Some people are concerned about baby-led weaning, fearing that the baby will choke if given whole pieces of food. Of course you do have to be careful, not giving foods like grapes, hot dogs, or anything too hard for baby to gum (unless it's too large to fit in his mouth -- a raw carrot makes a good teether) and always supervising mealtimes. However, baby-led weaning is actually safer because the baby learns to chew instead of sucking food off a spoon. Sucking purees off a spoon is all well and good -- it's similar to nursing -- until Mom tries to vary up the texture. Then babies often gag, cough, and even vomit, because unchewed food is getting too far back in their mouth and becoming a choking risk.

(Note: gagging in babies is a normal reflex and is not necessarily a sign of choking. A baby who is gagging is simply moving food out of his throat back to the front of his mouth for more chewing. A panicky expression or turning blue are signs of choking. But gagging itself is quite safe. Marko probably gags several times a meal, but has never choked.)

I was re-reading some of my old blog posts and remembering how difficult things were a few short months ago, as he was refusing to nurse. That is not at all a problem since I did the elimination diet. Occasionally I eat the wrong thing, but it usually results in screaming and crying later, not refusing to eat. I suspect the problem foods (tomatoes and chicken, mainly) cause him reflux, gas, or some other pain. When it happened often, he made the connection that nursing caused the problems and was scared to eat. Now, he trusts nursing much more, and so he no longer refuses to eat. He even comfort-nurses now -- the days of careful scheduling around his hungry moments are over. It used to be I had to be careful not to offer nursing more often than every two hours because he'd throw a fit -- now he'll nurse whenever, and if he's truly not interested he just squirms away with no tears.

You have NO IDEA what a relief it is to me to have him nursing well!

Sleep is more of an issue right now. He was sleeping 5-hour stretches at six weeks old, and occasionally slept through the night at three months. Now he usually goes down around eight, waking up at eleven or twelve, and then at three-ish and five-thirty (which is when I get up) at least. And he isn't so easy to put down again after the wake-ups, either: sometimes I have to try two or three times before he settles back to sleep.

He started having the sleep issues around four months, when the nursing issues were the worst. I suspect he was waking up more at night in order to get enough to eat, seeing as he wasn't getting much during the day. So our solution is probably going to include making sure he gets enough opportunities to eat in the daytime, so he stops needing to eat at night. I'm taking it one night at a time. It is hard, because I have to go to work whether it's been a good sleep night or not, and I'm very foggy when it hasn't. On the other hand, I do get occasional naps, so it's not as bad as it could be.

Sometimes he sleeps with us for short periods during the night. During his recent cold, he slept with us for about three nights. But as soon as he was feeling better, he began to sleep better in his crib. I'm beginning to think he gets overheated when he's with us. On cold nights he ends up in our bed much more, but on warm nights, if I bring him in there, he's soon awake and crying. Kind of makes me wish I'd tried harder to adjust him to cosleeping when he was a newborn. It would be easier some nights. I do sleep with him a lot better than I used to, and often can manage a nap with him during the day.

So, that's how he's doing! I am enjoying him so much these days. Everyone at school admires and compliments him, and all I can do is agree with everything they say. I like this age a lot. In fact, I get kind of sad when I think of him ever growing older. He's so adorable now. And he's in a perfect balance between independence and still needing lots of snuggles and holding. It makes me sad that someday he'll want to walk and won't need me to carry him all the time. I know it's the way it works -- but it's bittersweet.
Posted by Sheila at 3:58 PM

Sweet and interesting post, with the benefit of reflection. Glad things are going mostly well and that he's picking favorite foods and you're enjoying his cuteness and independence!