A damp, drizzly November in my soul

Around here, November isn't drizzly. It starts with the leaves finally peaking, and ends with bitter winds and bare gray branches.

But I find it depressing. Everything nice about the entire outdoors slowly fades away, and it's just cold and dismal for the next three months.

That's why NaNoWriMo goes so well in November. The only month that would be better is January. January has the advantage of a) thirty-one days, and b) no holidays to throw off your routine. But at any rate there's no reason to go outside and very little joy you don't imagine for yourself, so it's a great time to write a novel.

My NaNoWriMo has been a mixed success. That is, I did write 50,000 words. But they resemble a finished novel even less than usual. At least 10,000 words will have to be discarded because of plot changes I made midstream. I guess I'm still glad I did it, because writing one's way to a story still leaves you with more ideas than you had at the beginning, but good golly, I wish I could have ideas ahead of time like a good outliner.

In other news, Jackie got her placement from the school district. You know what they did? You know what this incredibly exhausting, difficult to deal with Child Find team came up with? They put her at a preschool exactly like the one she was at before, three days a week, 2.75 hours a day. A private preschool. Which they pay for because it is her official placement (yay) but which could not be her old preschool because it's not in the same county (ugh). There is a lady there from the district who is supposed to play with Jackie and help her gain social skills. So I agreed to it, because it saves us $280 a month, and because this aide could theoretically do some good.

But this place is further away, and it's all new people, and Jackie hates it. I was considering not switching her over at all if she minded, and she swore she wanted to do it, so I committed . . . and THEN she decided she hated it. OH MY GOD JACKIE. So every time she goes, she behaves well, everyone tells me she was great, and then she whines the whole way home that she hated it and hates everyone there. I don't know what to do with this information. I gave away her spot at the other place!

Meanwhile, because it is further away, I spend approximately an hour and a half every day driving her to and from it, with the dubious reward of two hours without her to "get things done." (I.e. collapse on the couch and stare into the middle distance and hate myself for not accomplishing more. Leaving the house REALLY exhausts me, doubly so when there are lots of left turns and traffic.)

I just had hoped they would put her into the public preschool which is basically across the road from us, and which also has a bus which could pick her up. I cannot fathom why they didn't. Because they were trying to keep her in the situation she had? Because the public preschool was full? Because they hate me? I don't know. But it's really exhausting. And still, despite all this talk about how gifted she is, this place is academically like every other preschool. They sing songs and color pictures and build things out of marshmallows and toothpicks. She is ready and willing to learn to read (so long as it's not from me) but this school is doing nothing for her in that regard. 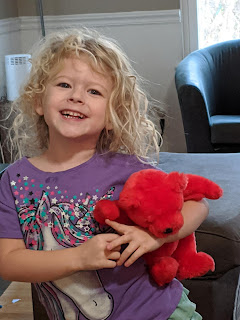 Her behavior is, in general, much better when she is in school regularly. So we've got that going for us. But she's had kind of a rough couple of weeks so it's still a struggle. I'm just so tired.

The older kids love their schools and are doing well in them. Michael is in robotics club. Miriam has a new best friend she goes on and on about. Marko is trying to teach himself Anglo-Saxon, which I find amusing because I also had an Anglo-Saxon phase after my Quenya phase. I don't choose his rabbit holes, but they still end up being a lot of the same rabbit holes I went down as a kid, so it's just really fun to watch.

I resolved, this year, to try to be a Regular Mom and sign up my kids for activities. Especially now that they're fully vaccinated. So next week they start in ballet (Miriam and Marko) and taekwondo (Michael) and we'll see how they like that. I do not like the idea of spending Saturday morning driving them places, but *loud sigh* I do love my children. Besides, they mostly spend Saturdays playing video games and fighting with each other. This is sure to be an improvement.

I still don't love living here. Especially with all the pretty leaves gone, I'm basically living in a gray suburban wasteland for the foreseeable future. But the immediate grief of it has faded, and I'm focusing on other things. This mammoth weaving project I started over a year ago. My novel. Planning for a science fiction conference I'm going to next month. 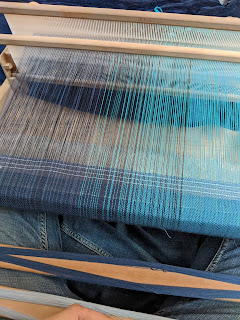 What I really need is to meet people. I've seen several people at various stores that I thought "heyyy now there is a person I find interesting! We could be pals! See, there are cool people here!" But I don't know where these people hang out when they are not grocery shopping. Where do you find cool people? Especially in a pandemic when everything is canceled?

My plan was to meet people at NaNoWriMo write-ins, a thing I never did in the old town because there were none closer than half an hour away. But this year they are all virtual. I'm sorry, writing a novel on my laptop with zoom on is just like writing normally but with performance anxiety. It is not a social occasion and you can't convince me it is.

So uh go get your vaccines so we can beat this thing and I can develop a social life for the first time in literally years! Please!

Posted by Sheila at 9:55 AM No comments: