It is possible that I am a lot readier to pick apart Lewis than I am with writers I like more. Because, while I absolutely adored Lewis when I was about 6-12 years old, it's not meant for adults and I was always going to find something lacking when I went back to them.

So let's talk about Tolkien. I got into Tolkien at maybe 12 years old, because my brother read the first one to me. Then I tried to read the second on my own, but I wasn't ready. Then something happened and I was ready, and I read them all, and The Silmarillion too. I was in love. Few books transport you to another world so thoroughly--a world that extends much farther than the eye can see in every direction, where the ruins are already moss-grown. You feel like a guest there, seeing a tiny shred of all that can be seen. And that's probably why it's such a great place to write fan fiction. There's room for it.

There are plot and style problems, of course, but I won't get into those. The book clearly works even if it's not written the way theoretically books should be. So long as we all understand it's to be enjoyed, not imitated. You couldn't pull off Tom Bombadil. You probably don't even know when to use thee and when to use thou. Tolkien spoke archaic language like a mother tongue. Those of us who don't, shouldn't try.

The books, though, don't just have archaic language. They have archaic concepts which even when he wrote the books were already beginning to be noticed as a problem.

Tolkien was inspired by the Germanic mythos. He felt that the English nation deserved an epic myth like Germany had, in part because he didn't like seeing English people fall in love with Germany's and start calling themselves Aryan. Here's one point to Ravenclaw (you KNOW Tolkien was Ravenclaw) for being anti-Nazi.

However, I feel like he missed the real problem with this. The whole concept of a romanticized ideal of a nation, with a founding mythos and so on, is a counter-Enlightenment concept which has led to fascism more than once, in more than one country. Instead of saying "we love our country because it has a good government and is fair to everyone," these myths teach us to say, "I love my country because I am English and we are special."

For years I puzzled over the idea of creating a founding mythos for America. Elves in America maybe? But in America, we know who was here before us, and it wasn't elves. White Americans know that exactly zero of us are descended from any special prehistoric elf king. We know we don't belong here. Now, the project has been attempted; it's called Mormonism. But Mormonism's mythos is horrible about Native Americans so . . . it fell right in that pitfall.

The fact is, your birth does not in fact make you special. It's actually important for us to recognize this, because obsessing over birth is a common human failing that's resulted in stuff like declining monarchies with increasingly worthless heirs, to say nothing of ethnic cleansing. And "your birth makes you special" is one of the underlying assumptions throughout Tolkien's work.

Consider: Hobbits are like this. Bilbo is a little different from average. Is that because he's chosen to be? Haha nope, it's because he's part Took and Tooks are a special lineage that's maybe a little bit Elf (but probably not). Dwarves, on the other hand, are like that, and all Dwarves without exception are like that. It's really great that Men, Dwarves, Elves, and Hobbits all have their strengths and can appreciate one another for who they are.

Till you get to Orcs and then it's just awkward. Are Orcs born evil? Do they have free will? When we kill Orcs (which we do, without compunction, throughout the book) are we punishing them for something they couldn't help? I kind of think the concept of an evil race is a serious problem that we should never do.

There's also the assumption of feudal and monarchic bonds throughout. A lot of people read Sam's relationship to Frodo as a romantic one, or just deep friendship. And it's neither of those. It's feudal. Sam goes to Mordor with Frodo, not because he loves Frodo (though it's clear he does, especially as the books progress) but because he is Frodo's gardener. That's why he constantly supports and uplifts Frodo, while Frodo . . . doesn't really return that in kind, ever. Sam is proud to be Frodo's servant, and that makes us feel okay about it where we might not if it were compelled--though, to be clear, most servant-master relationships in Tolkien's day were compelled.

Merry has a feudal bond as well with Theoden, and Pippin with Denethor. Both of them seem someone confused about what the expectations are, in a milieu so different from the Shire, but they end up with a similar kind of pride in their lords as Sam has.

Monarchy is assumed, everywhere but the Shire. Aragorn is going to be the king of Gondor, we understand, because he was descended from Isildur. Not because he's good at ruling (though he is). Even if Denethor had been an excellent ruler and Aragorn had been incompetent or oppressive, it's clear that authority is not given Denethor to deny the return of the king. Despite the fact that Denethor and his ancestors have ruled Gondor for centuries, while Aragorn's ancestors have been toodling about in the North doing whatever it is they do. It's Aragorn's bloodline that makes him worthy of courting Arwen, of curing illnesses with athelas, and of ruling Gondor. It's all very convenient, that in this monarchy there's no dispute between good people about who has the better claim. The people of the city are pretty willing to accept whatever their betters decide, and once Faramir's in charge, he's happy to yield to Aragorn.

I'm not exactly complaining; it was a long enough book as it was without a civil war over the rule of Gondor, or a referendum on who the Gondorians thought most worthy. As a fantasy, it's nice. Unfortunately, a lot of people (myself included, for a while) get a very romantic notion of kingship from these books. They think lineal monarchy results in badasses like Aragorn, who are both naturally virtuous and trained to rule, rising to the throne. In reality, they tend to result in secession wars every few generations, and even if you avoid that, you might get this: 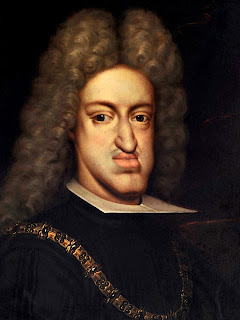 You just don't know! It could be a total mess. But people who romanticize Tolkien often contrast our real government, which of course is light-years from perfect, with fictional monarchies and think that what we really need is hereditary monarchy. Let me assure you: that is the last thing we need.

So: Tolkien, consciously or not, romanticizes racial and family determinism, feudal bonds, and monarchy. And that's not great. But I bet you thought I was going to talk about women, so here I go.

There are not enough women in The Lord of the Rings. (The Silmarillion is a little better; The Hobbit a lot worse.) If I were rewriting it, I'd make Merry, Pippin, Gimli, and maybe Aragorn all female and it would be a noticeably better story. (Sure, you could pick different people; that's my set. I especially like the idea that nobody knows Gimli is a girl till the very end, because female Dwarves look the same as the men.)

But honestly, I think the women that do make it in are portrayed better than the women in C. S. Lewis. Lewis's women are only allowed to be certain ways; if they're too girly that's bad (Lasaraleen, Susan) but if they're not girly enough that's also bad ("wars are ugly when women fight," right before sending children into a literal pitched battle and making a little girl be a battle medic, what the heck?). Tolkien's women are, at any rate, unique. Arwen has only a minor role, yet we see she's making huge sacrifices for love and going against what was expected of her. Galadriel is immensely powerful, overshadowing her husband (who seems to be supportive as heck and not at all threatened). Eowyn is the most fleshed-out of all, and she chafes against the restrictions she is expected to live with. She does go to war (which, surprise surprise, is ugly all-around and not just for her) and being female turns out to be an unexpected advantage.

I'm not entirely happy with the way she just quietly stops being a shieldmaiden at the end; it's not entirely clear to me whether it's because she feels there was something wrong with being one before, or just that she no longer feels herself caged the way she did in Rohan. But I love how Faramir woos her: "I do not offer you my pity. For you are a lady high and valiant and have yourself won renown that shall not be forgotten." That's not the kind of random, meaningless chivalry Lewis's men pour out all over the place. It's specifically tailored to her; he is proud of her accomplishments in battle and has no desire to minimize them or gloss them over. We need more supportive dudes like that.

I still think there should be more women in the book. But there's something special about the way the men are supportive of each other, soft, unafraid to cry, deep and lasting friends. I, myself, don't think that would be at all impossible with women around, as some men do and Tolkien might have done. But I'm almost willing to sacrifice having many female characters for this degree of wholesome masculinity. Sam carrying Frodo up the mountain is one of the most beautiful and moving things in all fiction, and it's an example that more men could stand to look to when it comes to supporting their bros. Steal fireworks! Sing in the tub! Cry for your losses! Just so long as, in the end, you carry each other up the mountains you can't climb alone. I like that the emotional-support roles weren't just shoved off onto any available women, if only because there weren't any.

I would give (and have given) these books to my kids to read and love. I don't think they should be the only books kids read, though. I want books where boys and girls team up to beat the baddies, books where evil kings are overthrown and not replaced with nice kings, books where Orcs turn out to be decent family men who hate having to work for dark lords and are happy to be liberated. It's something to keep in mind, if you ever try writing fantasy.