As you might have guessed from the last post, I just got back from a trip. My work is based in the Seattle area, and my boss has been wanting me to come out and work in person for a few days, and with life somewhat settled I figured it was a good time to make plans.

Traveling is really rough and exhausting for me, but I gotta say, it's a heck of a lot easier to do without kids than with them. I flew out by myself, stayed in a hotel by myself, and worked in an office for whole normal-people days.

I'm not what you would call a flexible or adventurous person, but I did okay for myself. The biggest challenge was probably the acquisition of tea. Coffee, you see, has way too much caffeine (and I dislike it) and decaf coffee does not have enough. But airports and hotels do not always have tea.

Day 1: Peet's Coffee sells tea. Win! It's scaldingly hot and they don't leave much room for milk and I didn't have time to properly steep it or let it cool down. Burned my mouth. Two stars.

Day 2: Tea bag brought from home brewed in hotel room coffee maker. No milk. No sugar. Ghastly. Half a star.

Day 3-4: Tea provided by work especially for me. Did I feel bad that my boss went to the store specifically to get me a better chair, black tea, and whole milk? Yes. Did I feel bad enough to tell her not to? No. No I did not. The tea was excellent. In the afternoons I had rooibos chai. Five stars for all of the office teas.

Day 5: Rushing at the airport, no time to find if ANYONE in Seattle will sell you decent tea. But I had the clever idea of buying iced tea at a newsstand. Iced tea is actually really good. Between the copious sugar and the caffeine you can feel the dopamine slotting into your neurons. Four stars.

While I was out there, I couldn't see my parents because they have moved. Idaho is on the way if you drive, but not at all on the way if you fly. But I did get to see my aunt, my cousin, and my dear friend from high school and college. 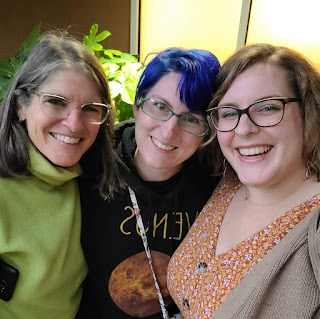 My aunt and cousin are absolutely amazing people. I love them so much. My cousin and I have been best friends since we were tiny and it really felt like no time had passed at all since then. Our lives have taken very different paths, yet somehow I feel like we ended up in very similar places.

For extra wonderfulness, we got to take a little walk. It was raining. I did not care. 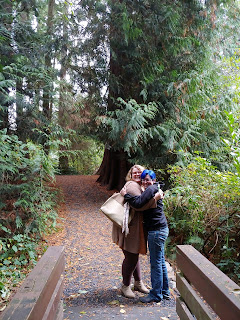 We also went for pho. Pho is a thing that one must eat in Seattle, and I never had.

The next day I had no plans after work so I ate supermarket salad in my hotel room and soaked in the hot tub. Hot tubs are kind of boring by yourself. You can read, but then your arms are cold!

The day after that, my friend Sarah picked me up and fed me dinner at her house. She has built such a beautiful life for herself and seems happy. We both agreed we need to call each other more!

The last day, I didn't have plans and didn't want to make any. I lay in my extremely soft bed and read a novel I wrote two years ago and cried. Then I watched Community and laughed a lot. It's just an amazing thing to have like five hours of time to myself and no responsibilities. Highly recommend. 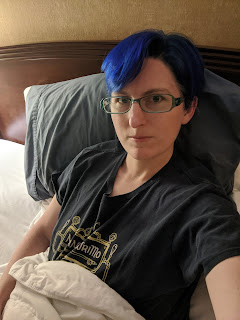 I missed my kids a lot. The first day I felt awful, being so far away and in an unfamiliar place. I felt guilty for having left and stupid for thinking I had any reason worth coming that far for. I gradually got used to it, but I was still very happy to go home and get back to them.

I had been needing a change, because everything had been feeling very hard and exhausting. So having a week that was very different from a usual week was badly needed. I felt more like my old, pre-kids self: less stressed, more emotionally labile (as evidenced by bawling over a book I have read at least ten times before), more creative. I still feel that way.

I feel like, with the level of stress in my life and the rather fragile personality I have, I need to do more things like this. Well, maybe not flying across the country and being deprived of tea! But a retreat. A few days in a hotel once a year, maybe, or even at a retreat house. Just time when I can stop keeping track of ten million things to do and just focus on feeling feelings and maybe writing.

It helps that John managed everything just fine and the kids had no major issues. They missed me, but they didn't fall to pieces over it.

Makes me think they're old enough for me to slowly incorporate more non-them things into my life. Which is a really good feeling, even while at the same time feeling reassured that, in general, I prefer the life I live. I officially do not like working eight hours a day, eight hours is f o r e v e r. I don't like not being with my kids for very long. I don't get any special thrill from being an adult with no responsibilities in a big city. Coming home felt good, even though I have no particular love for this house yet.

I think I've actually made the right choices for my life, maybe. It's a thing I've spent a lot of worry on lately but a little skip down the road not traveled made me perfectly happy to get back on this one. I just need to keep a few of the good things more present in my life: time with other people I love (even if it's on the phone); quiet time all by myself; and of course beauty. If I can do that, I think I will be a lot happier with my life.

Posted by Sheila at 2:41 PM No comments:

Some reflections composed on an airplane

But beauty also glitters in a thousand places, some of them very small and hard to notice. The tiny chip in a featureless wall that tells you other people have been here before you, with their stories and their mistakes. Green moss growing under slush, long after the other green things have died or gone to sleep. An old woman's face crinkling with joy behind the counter of a dirty shop. 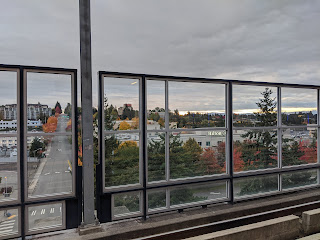 Seeing beauty when it surrounds you, beside a forest stream or on a starry night, is easy. Seeing beauty in the places that leave you hungriest for it is hard. The delicate feathers of the soul, whose task is feeling out beauty, shrivel up and tuck themselves away under the onslaught of so much ugliness. It hurts to leave them still bare and questing. You harden the outside of yourself as if to face a hard vacuum. You know it will crush you if you leave yourself open.

But if you do, you’ll never see beauty. You might not even feel that part of your soul slowly dying for lack of light. So I leave myself open. I’m not sure I have a choice. 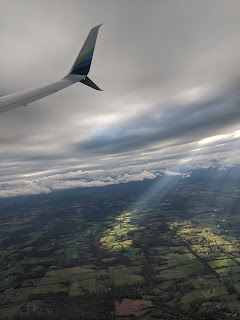 Those of us who leave ourselves open to beauty suffer. We feel all the pain, we are worn away and exhausted from ugliness. Every day it hurts us, living in the world as it is, so battered and bruised and grimy. It feels we can't live among all this ugliness. It feels we will wither up and die of beauty-hunger.

But we find it. We find it, those of us who can't stop questing hard every moment of our lives, who reach out with the delicate parts of our souls, in hope that can't die because it never stops being hungry. A flash of light off a puddle. The swish of tires in the rain. The spark leaping from eye to eye, from soul to soul, as two of us recognize what is divine in each other, no matter how briefly. 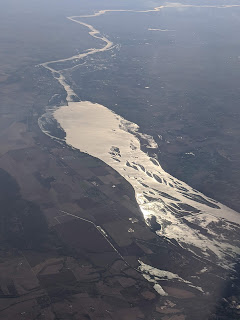 There is more pain in this life than pleasure. More ugliness than beauty. Hunger gnaws so much harder than food has ever brought joy.

But in those moments when beauty flames out--tears prick our eyes, the heart leaps upward, and we know it's worth it. The hunger, the quest, the finding, the losing again. Life, in all its ugliness. Just for these moments, if for nothing else. 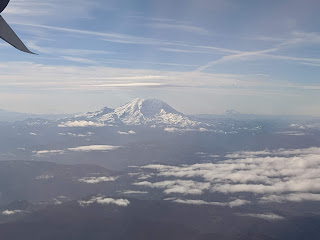