It's been a while since I've posted, so what's up with us?
Really, not a whole lot. Jackie has started preschool at her tiny but inexpensive co-op. It's three days a week, three hours a day, which amounts to about seven hours of Jackie-free time a day. I desperately need more, because I am exhausted and have this job I'm theoretically supposed to be doing? But she seems to feel it's the right amount.
She likes school and behaves flawlessly at it. I got to volunteer there yesterday, and it was funny watching other kids jump around and shout out and she just . . . sits there very nicely with her hands in her lap. When asked a question, she answers in a barely audible voice. When other kids try to talk to her, she mostly ignores them.
It was an odd experience. I have spent the past several months trying to convince the school district she needs help (about which more later), and honestly she doesn't look like she does. She suddenly displays a level of maturity none of the other kids do, and which she certainly doesn't show at home.
But she also doesn't interact the way the other kids do. She tells me she can't talk to the other kids. But she also says she likes playing by herself.
If I'd known I'd find a preschool I could afford, and she'd do so well there, I wouldn't have spent all this time fighting the special ed system. She's really fine. Sure, she doesn't socialize, but she's in an environment with lots of opportunities to learn and will hopefully pick it up a little bit. She's certainly better at talking to people than Marko was at the same age.
But I have done all that work, and Jackie got assessed. It was much more rigorous than her autism diagnosis, which happened in a short session a couple hours long. This time, I was interviewed several times and she went to four different assessments and somebody watched her at school. The results were mostly glowing, all about her far-above-average intelligence and thoughtfulness. But, coupled with the stuff I told them about her behavior at home, and the reality that she does not play with peers, they agreed to declare her eligible on the grounds of developmental delay. They said using the autism criteria would be harder, since we didn't have much school-related data, whereas developmental delay just required her to need help in one area.
I don't know yet what services, if any, they will provide. They might let her into public preschool. That would be nice for me, because it's free and because I'd have more time to work and clean the house. But it would be hard for her, because she's pretty well settled into the preschool she has. Alternatively, they might only put her in a social skills playgroup. That's more work for me, but might be helpful for her. And, of course, she would have an IEP when she starts kindergarten, and we could put things in there like sensory breaks, which she definitely needs. 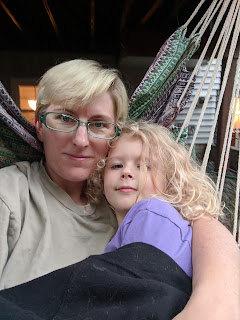 Meantime, while the school district and I argue about her needs, she just keeps growing. She is gaining skills all the time. She can sound out short words. She can count to a hundred. She is getting better at communicating her needs, and she's eating more. She watches way too much TV. Every day she has me print out a coloring page of an LOL Surprise doll (or two), colors them, cuts them out, and makes them talk to each other. She and Miriam have a complicated Barbie game they play a lot. I gave her a sticker chart and she's now motivated to brush her teeth and let me brush her hair every day to get stickers.
Everyone else is doing fine. Marko in particular loves his school. Apparently he does still melt down pretty regularly at school, but the special ed people take him for a little walk and he cools down. There's one special ed teacher he absolutely adores. He's in this guy's Life Skills class and apparently life skills means playing Dungeons and Dragons and making podcasts. But there's a lot of social skills in activities like that.
Michael and Miriam aren't as enthused about their school. I feel bad, because they had friends at their old school and don't yet at their new one. But they do play with their classmates and recess and mostly come home happy.
I'm struggling a bit. I feel like I'm juggling way too many things: work, the kids' school, special ed stuff, housework, and writing. This was supposed to be the year things got easier, but they sure haven't yet.
What helps me is spending time in nature. There are lots of parks near here and they're very good, despite not being in the Blue Ridge Mountains. Sometimes I hike while Jackie is at school.
I started daydreaming of boating Bull Run Creek, because allegedly it's possible to do. John, out of the blue, got me an inflatable raft. So last weekend I took the kids and we took the trip.
I can report that Bull Run Creek is not, in fact, exactly navigable. Sometimes it's too shallow, sometimes there are logjams, sometimes a branch pokes a hole in your boat. But despite that, we did in fact manage it. It was mostly very peaceful, sometimes exciting enough even to please Michael, and in general a lovely experience. But next time I'll try the lower section that might be a little less intense. 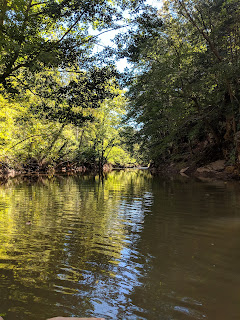 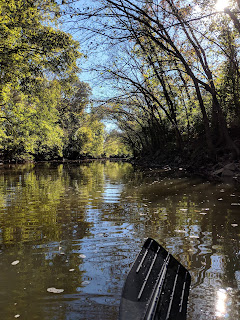 Well, after I patch the hole in my boat.
September's writing goal was to finish a novel I started two years ago. It's about a colony on an alien planet, intended to explore themes of ecology and colonialism, but actually focusing mostly on my main character's feelings about being a stay-at-home mom and about her religious disagreements with her husband. Stuff just SURFACES, okay?
Anyway, I finished the draft today. It felt like pulling teeth most of the time I was writing it. The plot got way too complicated. I lost faith in it six or seven times. Because of that, I really can't tell you if it's any good. There are lots of feelings in it anyway?
I entered it into a contest, because the prize is getting professionally mentored and edited by somebody who knows what they're doing and that's what I desperately need. I don't feel like it has much chance of winning, but I may as well, right?
Posted by Sheila at 12:00 PM 2 comments: