Human spaces are not Aesthetic

Today I drove 75 minutes each way to see a friend who used to live near me. The drive wasn't bad, but I got to thinking about how much better I feel once the highway passes into the mountains and I can't see buildings from the road anymore. Nature is always beautiful; it always feels right.

But buildings and parking lots generally do not. They make me feel depressed, grody, angsty, or ill. Neon signs. Gray concrete. Featureless warehouses. Power lines clogging up the sky. Ugh. Hate it.

Of course developed areas don't have to be like that at all. There are cities people go to purely to look at. 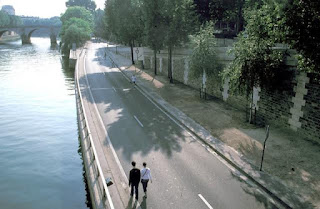 There are residential neighborhoods with mature landscaping and cute little porches. There are main streets with cute little shops and trees by benches. It can be done!

There are nice places, but they're all pretty expensive. Much of the DC area (see: the part I don't live in) is like that. You can see that, at least, an effort was made to keep the shopping areas looking somewhat pleasant, to line the streets with trees, to make all the houses look slightly different. Things are also kept up, which makes a world of difference. Houses there cost $700,000 on up, so the people there can afford to keep things nice.
But all of that costs money, and we don't all have money, so we have to live in ugly places. My neighborhood itself is . . . fine, I guess. The townhouses are all identical, but there are green spaces with trees in them. And some people have bushes in their postage stamp yards.
We also have woods and a creek, hidden behind the playground. When I found that, my morale about living here got at least 30% better.
Beyond my actual neighborhood, you can go two ways. West, there are winding residential neighborhoods for a good ten minutes. The yards have lovely mature landscaping. The houses, though, are also mature. They're a little ratty. Mostly I like this drive. I grew up in a neighborhood like that, a little old and ratty but filled with huge old trees and character.
The other direction, there's a big busy road, where you can choose north or south. North it turns into a highway, and you can get to a shiny, fancy town that can afford to make an effort. South, where I go more often, it just gets grodier and grodier. Car dealerships. Ratty old shops for tires or whatever. No trees or hills, just one dismal looking business after another.
And I find myself wondering: is this how it has to be? Because of the lack of money, because this is where the working class lives, because of population density? Is there any way to make this road not feel soul-sucking to drive on, to feel like the drive out into the mountains feels?
If I could do a few things, I would plant more trees. Just more trees everywhere. They feed my soul. Bushes too, and grassy patches. I'd bury the power lines underground. Maybe find a place to park all those cars that isn't massive expanses of asphalt. This town has tons of creeks and little artificial ponds (as a flood measure); if those were actually visible more often, it would be really nice.
I'm not sure any of this will ever happen. But I do feel that beauty is a human right. That we shouldn't have to be rich to afford it. And also, that we should be able to live more densely (because it saves gas, preserves wilderness, makes population growth workable) without having to feel like bees in a hive.
Posted by Sheila at 10:20 PM 1 comment: