Trying to think of words to describe Miriam, I feel like I can't without talking first about what a dark place it was she brought light into.  It was, in many ways, a bad time to get pregnant; Michael was still extremely needy and I felt I couldn't possibly handle another so soon.  I spent a big chunk of the pregnancy crying.  My page-a-day journal has several months of blankness where I would try to think of something to put down for the day but couldn't think of anything that wasn't horribly depressing.

Her labor was a horrifyingly stressful experience, but she arrived in the middle of misery and was perfect from the first moment.  Her first achievement was being a girl -- I had tried and tried not to get my hopes up, but I really wanted a girl and there she was.  She was healthy, dark, and blue-eyed, just like all of them. 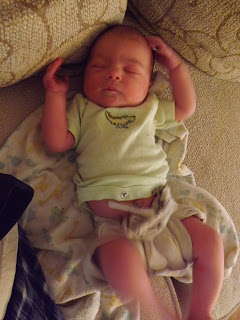 The first weeks of her life were a nightmare for me -- sickness among the family, stepping on a bee, fights breaking out among her brothers -- but she, herself, was zero trouble.  Mostly she slept and ate.  She had no trouble nursing at all; she liked nursing but wasn't ridiculous about it like Michael.  She was several weeks old before she ever cried.  That includes her baptism and the heel stick by the midwife.  At most she might make a little fussy sound.  She just wasn't fazed by much. 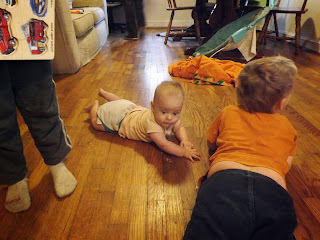 Like all my kids, she's always been a horrible sleeper, but in every other respect she's been pretty easy.  She was early on all her milestones -- early crawling, early pulling to a stand, early walking.  And yeah, she got into some trouble that way.  But I seem to remember that she was coming when called at about 12 months.  I remember wondering whether she was a significantly easier toddler than the others, or if I was just way better at parenting now.  She's just always been pretty agreeable.  I don't think I ever had any trouble getting her to hold hands in the parking lot or get in her carseat.  Generally if you let her know you want something, she'll do it with a giant smile on her face. 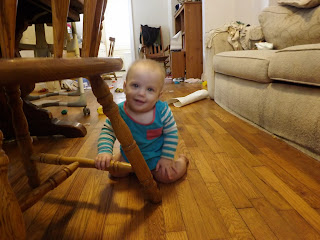 Okay, she has her moments.  She throws screaming tantrums from which there is absolutely no soothing her -- except letting her hug her baby sister.  She often resists going to bed.  She still wakes up at night pretty often, and sometimes for a long time.  When she sees a sibling with a toy she likes, she sometimes forgets and snatches it, or starts to howl or smack them. 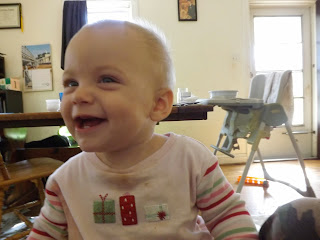 Yet that's really an aberration for her.  She actually likes sharing; when she sees a littler kid at the library or a friend's house she gets really excited about handing them toys.  While her brothers sometimes love and sometimes hate each other, she always loves them both and plays great with them.  She is rarely competitive and doesn't get sucked into the whole "who got into the car first" race the boys always have. 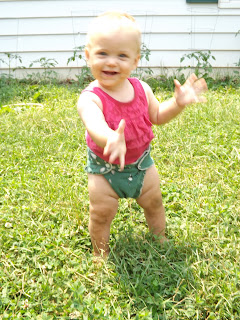 She doesn't like crowds or strangers at all.  When we have someone over she often glues herself to me, and if someone says hello to her at the store she wigs out.  But babies are an exception -- she always likes babies and toddlers.  She isn't scared of anything other than strangers and maybe spiders -- she will go to the top of the highest jungle gym and slide down the tallest and steepest slides.  But only as long as there aren't strange big kids on it! 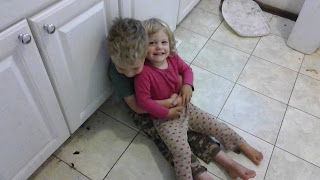 All toddlers like to be an "apprentice mom," but Miriam more than anyone.  She loves to watch me cook, help with dishes, and carry laundry, and she's offended if I ever attempt to do chores without her.  This child, the other day, unloaded the whole dishwasher for me without being asked.  She just wanted to do it.  She often picks up her toys, with or without my help. 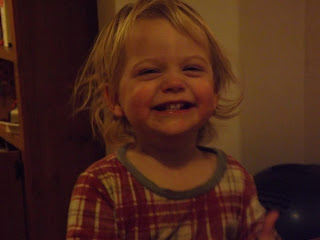 She's so stereotypically girly -- babies, cooking, and now princesses are her only obsessions.  As a toddler she liked to watch cooking videos to fall asleep.  She spends lots of time with her toy pots and pans, making food and narrating the whole experience.  (As I'm writing this she's serving me lego ice cream.)  Or she'll tie her doll to her with a scarf and carry it around everywhere.  She often goes through three or four outfits in a day, just because she changes her mind.

When I got pregnant with Jackie, she was always my comfort.  I might have been miserable but she was excited -- it made me feel like I was doing her a favor, when otherwise I might have felt guilty she was getting less attention.  From the very first moment she has loved Jackie unreasonably much.  She self-weaned the day Jackie was born and never nursed again, because that was for Jackie.  She no longer needed to nurse for comfort, the only thing she wanted for comfort was Jackie.  She misses Jackie when she goes down for a nap, and when the baby wakes up she always asks "did you have a nice sleep Jackie?"  She wants them to dress in pretty clothes and get their picture taken together.  She's sometimes a bit rough with her love, but she's utterly unfazed by Jackie's usual lack of interest.  In her mind, Jackie loves her and she loves Jackie and nothing can ever get in the way of that. 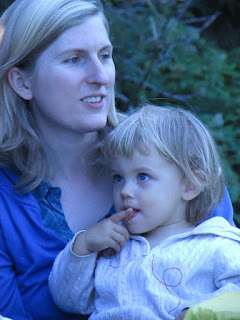 I'm no longer number one in Miriam's heart, but she's still lavish with her affection.  She loves hugs and kisses and learned at a very young age to tell when someone was hurt and to give them a kiss.  She loves her daddy, too.  John usually puts her to bed, and for awhile there he was the only one who could.  Lately, though, she'll go down for either of us, and we don't need to stay till she's asleep, so I actually enjoy taking her upstairs and spending some time lying in her bed snuggling.

Sometimes I look at her and I can almost see the adult she'll someday be.  Tall, probably; naturally tan; blue-gray eyes; probably light brown or dark blond hair.  I hope she keeps her enthusiasm for life, her inability to be stopped, flapped, or fazed; and her intense love of her special people.  I think she will.  I expend very little worry on Miriam.  She makes me happy just by being herself. 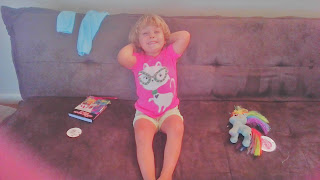