About a month ago, I realized I hadn't blogged much all summer.  But it was summer, and I was busy, so I didn't think I could write a post.  I decided to just post pictures.

Problem: picking out pictures ALSO takes time.  So summer is over and I'm only just now writing the post.

Summer was rough.  My kids do not get along with each other very well.  The only cure is to constantly take them places so that they have stuff to do, but that's exhausting and often expensive.  But I did do better at taking them places than I did last year, thanks to a baby that (theoretically at least) doesn't nap.

Our first adventure was flying out to see my family in the Seattle area.  We haven't been since Miriam was born!  And boy, is it ever expensive to fly a family of six across the country.  To say nothing of keeping them from wandering off in the airport.
But they did surprisingly well at the whole thing.  They mostly enjoyed the airplane and handled the airport and the million little shuttle buses just fine. 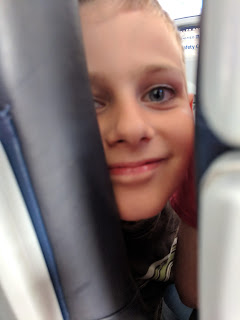 Pro tip: some of United's flights have the inflight entertainment provided by an app.  But they only tell you this after they've made you turn your phone to airplane mode, so if you haven't downloaded the app, you're SOL.

On the other hand, the PBS kids app was already on our tablet, and they liked that.  We basically swapped around books, phones, and the tablet for five hours.  Jackie napped.  Miriam was scared of the bathroom and thus peed her pants twice.  OH WELL. 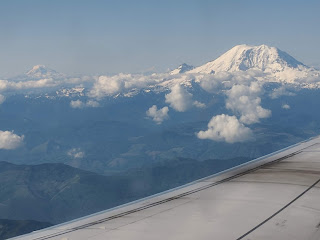 Of course there was much fighting over the window seat, with sights like this! 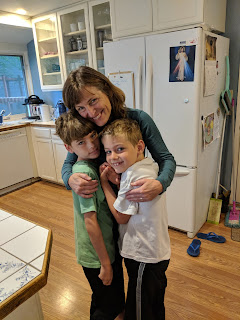 Their grandma was delighted to see them!  And they warmed up much better than past visits.  Except Jackie.  Jackie gave everyone the stinkeye.

My family likes to keep on the move.  One of the days we went hiking at Rattlesnake Ledge.  It sounded manageable--only two miles to the top, and a nice view!

We got to the park, took one look at the summit, and said, "Yeah, we're not getting to the top of that." 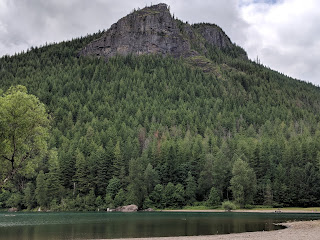 It was kind of a horrible hike.  I had a lovely time at first, even though the way was steep, but Jackie refused to walk at all.  She weighs twenty-six pounds and had to be carried every single step of the two miles up, two miles down, and over a thousand feet of elevation gain.

The kids got all spread out, so that the boys went up with my brothers and sister, Miriam followed about half an hour later with my mom, and John and I dragged in fifteen minutes after that.  Finally got to the top and had a panic attack at the thought that MY KIDS WERE NEAR THAT DIZZYING DROP.  FOR FORTY-FIVE MINUTES.  SUPERVISED ONLY BY TEENAGERS. 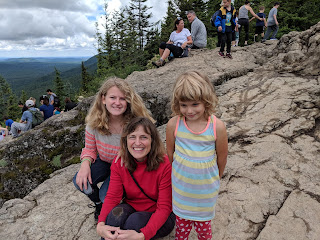 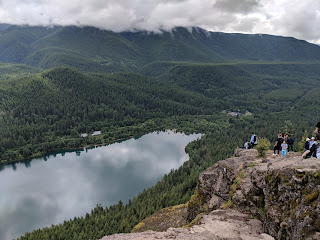 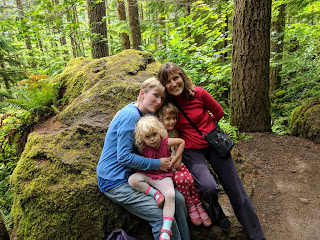 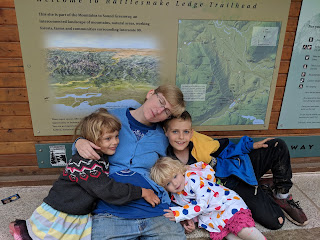 By the time we got to the bottom, I was a limp noodle of nerves and exhaustion.

But!  We sure did get amazing pictures, didn't we?  I highly recommend this hike if you are an adult.  The kids did manage it with much whining by the end, but there's that dizzying cliffside where a person died last year.  I can't recommend allowing kids within a hundred yards of it.  However, nobody died and all's well that ends well.  So long as I don't think about it.

Then my dad took us sailing.  Last summer they all went sailing together and I complained that when I was a kid, I never got to go.  My dad reminded me that my younger siblings get a lot I didn't get, because they were so poor when I was a kid.  Well yeah, that's what I'm jealous about, Dad!  So he said, okay, come and visit and I'll take you sailing.  That's what we did, and it was AMAZING.  I loved it.  I want to go live on a boat. 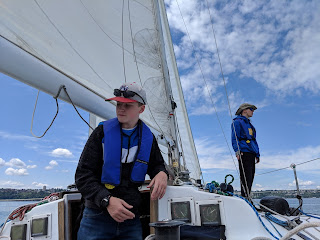 My brothers operated the sails and took turns at the tiller.  I now know what "helm's alee" means! 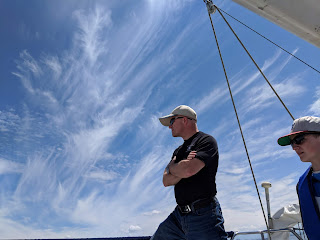 My dad has been sailing since he was a kid.  Basically in his element here.

Puget Sound is really the ideal place to go sailing.  There's plenty of wind and places to go.  We saw seals, otters, birds, many fancy beach houses, container ships, cranes.
Jackie didn't especially love it, but she eventually stopped fussing about it. 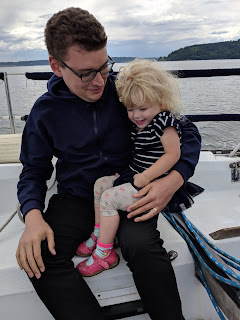 We also visited my grandma in Wenatchee, my other favorite place after the Seattle area.  Because of the Cascade Mountains' rainshadow, it's very dry there.  As you drive it turns from this 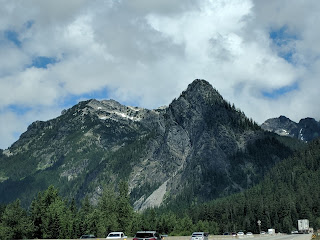 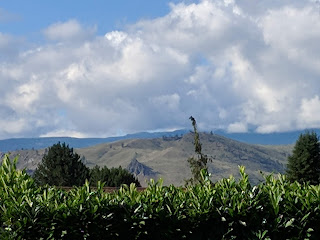 My grandma was very happy to see us.  Jackie refused to get into the picture.  Sigh. 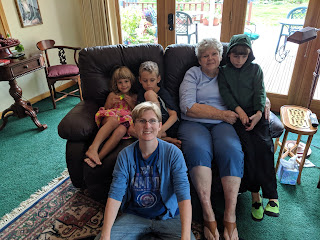 Then we got home and had a visit from John's mom. 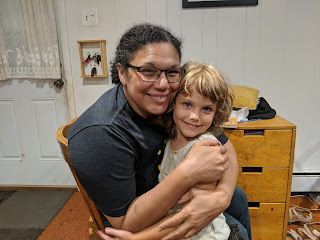 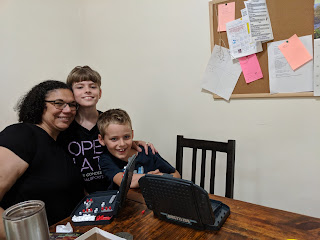 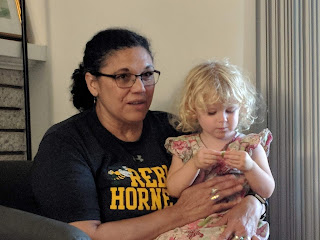 The kids loved getting more attention.  I loved them getting attention from not-me.

The rest of the summer was all on me.  We went to parks, and creeks, and lakes, and pools.  It's so hot in Virginia in the summer, and none of the swimming places are free.  You're not supposed to swim in the Shenandoah (I got told off for it by a cop once) and the creek, while free, is only about waist-deep.  So sometimes I paid to immerse my kids in water, and it was always worth it.  Jackie, who was suspicious of water in June, was lunging for it by August.  None of them can really swim, but they love to splash. 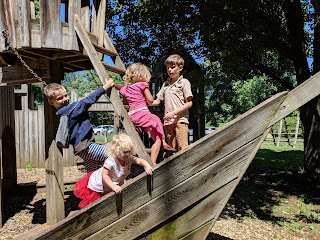 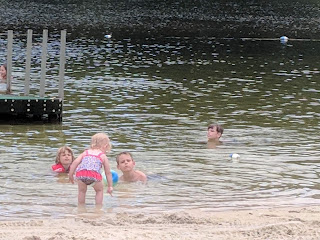 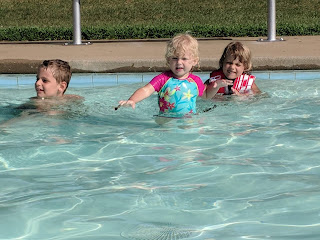 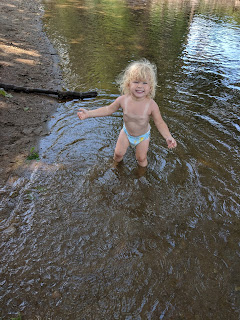 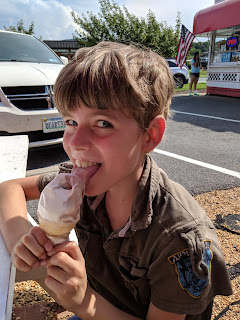 And that was our summer!  We had lots of fun but I am exhausted and very happy school has started.