I know I've horribly neglected this blog lately.  I have reasons!  But I have at least one post a month for years running and I don't want to mess up my streak.  So here is a Post for July.  It may not be a good post, it may not have anything all that interesting in it, but so long as I manage to hit post by the 31st I still win.  By one measure of winning.

It's just been a super hard summer.  Like last summer was, only I feel it more because the school year was so much better.  I used to disapprove of those memes about moms loving the first day of school.  How can you not want to be with your children every second?  Haha.  Well, the first reason is that you've already had five years with them nonstop and that's a very long time.  The second reason is that big kids have a much higher need for stimulation than little ones do.  If they get bored, they will either whine and cry, pick a fight with their siblings, or destroy something.  So you wind up spending all your time preparing interesting and harmless things for them to do, and it turns out Activities Director is a more exhausting job than just Mom.

Marko's behavior has been especially horrible.  School was so great for him, with its consistent schedule and things to do.  Without it, it's like he can't think of a thing to do besides boss his siblings around and attack them when they won't listen.  And if he thinks about school, he feels sad that second grade is over and scared that third grade will be hard.

And of course I'm doing all this with Jackie around as well.  Miriam is no problem, she runs with the big kid pack, but Jackie isn't ready for that.  She needs naps.  That really cuts into field trip time, but if we're at home, the kids won't be quiet.  She ends up getting overtired and doing her thrashing-and-screaming trick for an hour, while the big kids shout over the sound of her screaming, "He looked at me!  He touched me!  She has what I want!  Can I have a snack?"  There is zero awareness that maybe while their sister is screaming is not the best time to ask for something.  Then, of course, Jackie winds up napping too late in the day (=after noon) and being up till ten at night.  I want her to give up napping, but she's not quite ready.

The result is that the house is a mess, stuff isn't getting done that should, I've been unable to write or send off submissions, and my patience is really, really fraying.  So yeah, I'm going to be having a party the first day of school, which (thank the school district) is in only three weeks.

Of course it's not totally Lord of the Flies in here.  Marko has been reading lots.  He is three books into the Chronicles of Narnia--a big deal because he hadn't read chapter books before.  I started him off with a chapter and then left the big illustrated copy lying around.  As expected, he couldn't help reading ahead.  I pitch in with a chapter now and again so he doesn't get discouraged. 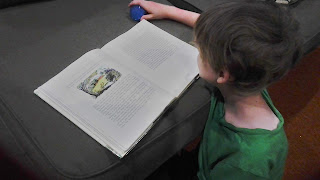 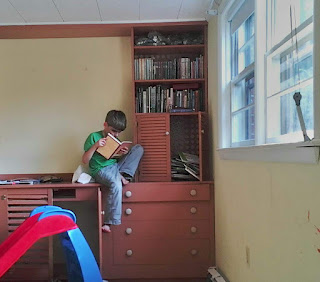 We've been going lots of places.  Swimming, soft serve ice cream, museums, parks, hiking, Civil War battlefields, game stores.  We got them Magic: The Gathering cards and that's a game that everyone enjoys on a different level.  (I build decks; John and Marko play; Michael plays according to some made-up rules; Miriam looks at the pictures; and Jackie ... well, hopefully Jackie is napping at the time.)  There have been some documentaries and science experiments.  We're making memories, and it's not just memories of them whining.

Posted by Sheila at 3:33 PM No comments: