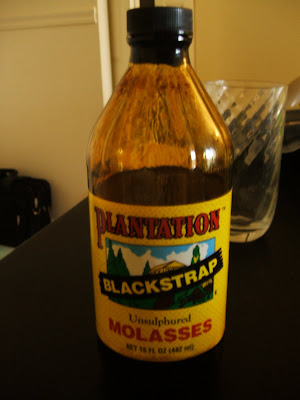 I love the taste of molasses. It's all the stuff that gets taken out of brown sugar to make white sugar (though why anyone would do that is a mystery to me -- brown sugar is WAY better). Blackstrap molasses, the kind I have, is the highest in minerals and is a good source of iron, calcium, and potassium. It isn't very sweet, so it's best in savory dishes or in dishes with another source of sweetening.

It's very black, so it instantly colors everything it's added to. A very small amount can be added to sauces or soups to make them that appetizing brown. I've also used drizzles of molasses to decorate a pumpkin pie once -- it looked like a Jackson Pollack painting and was delicious.

Since molasses goes so well in so many fall dishes, I thought I'd share some things I've used it in recently.

First I made this molasses custard. I messed with the recipe a lot. The changes I'd recommend are the addition of pumpkin pie spices (cinnamon, nutmeg, cloves, and ginger) and sprinkling a tiny bit of sugar on top. It's good hot, cold, or even frozen!

Then I fell a little bit in love with the notion of molasses and those four spices together. It's such a perfect combination for a cold day. So I've been adding them to oatmeal, yogurt, and so on. Molasses cookies are delicious too! I hope to make a pumpkin pie soon (as soon as the Halloween pumpkins go on post-Halloween sale!).

The recipe I'm going to share with you is homemade barbecue sauce. As you know, we have several diet needs around here which are requiring me to make everything from scratch if I want to have it at all. And what I wanted was pulled pork barbecue ... partly because I like it and partly because I am tired of having nothing but beef now that chicken is on the naughty list.

Place in a capped jar and shake to blend. Pour half over a pork shoulder before cooking in a crock pot, and add the rest after cooking. Or, keep it in the fridge for hot dogs and burgers!

I have two prayer requests for y'all:

1. My Grandma J has slipped into a light coma. Grandpa says she wakes up for a few seconds and then goes back to sleep.

2. Dr. Warren Carroll, the founder of my college, has had another stroke and has lost the ability to speak. We're hoping he is able to recover this. I especially do, since he used to be at my school every day, and I'd finally gotten up the guts to talk to him. Just last week I had a nice chat with him. He's a really nice man as well as quite a genius when it comes to history.