Since before we were married, John and I have dreamed of owning a home. I mean, who doesn't? But we went so far as to browse online listings and drive by row houses for sale in Philadelphia.

A "fixer-upper" in Philadelphia sometimes has no roof, though, so that didn't happen. We couldn't afford it anyway.

Periodically we come back to the issue. Can we afford a house yet, or not? How much house could we afford? Is it time to try?

A few weeks ago, John proclaimed that it was time to try. Our lease ends in April, and rent is expensive here! And we can't even keep paying this much forever ... once baby is two, we will be required to get a two-bedroom apartment. In a way, John argued, we can't afford not to buy a house.

Well, it's not hard to convince me. I've dreamed of having a house for a LONG time. One I could "do up" to suit me. Once we'd crunched the numbers enough to find out we could afford a very inexpensive house, I was all for it.

We both agreed we wanted a fixer-upper. Partly because we'll never be able to afford anything else (this is Northern Virginia; good houses don't come in a one-income price range!) and partly because it actually is something we want to do. We want to improve our house over the years to be something that's really ours. I think, deep down, we both have the image of the house in It's a Wonderful Life, broken-down and barely livable, being transformed into a home. I don't think I'd put up wallpaper while wearing heels and pearls, but ... the image does die hard.

So we found a realtor by a recommendation from someone at school (this is the only way to find anyone - the "school community" is very large and filled with nice, helpful, professional people) and went out to "look at houses."

We discovered the limits of our price range pretty quick. For instance, we basically can't live in this town, or anywhere as close or closer to D.C. Luckily we hate living even this near to D.C., even though John works there. There are areas still (barely) within commuting distance that are still affordable, though, and much more country-feeling. You have to drive past a lot of McMansions to get there, though!

I had thought a very tiny house would be a possibility, but even those seem to only be available with foundation cracks and mold.

Then we saw this: 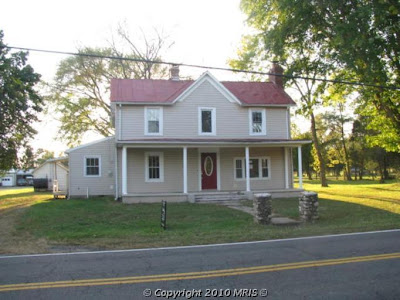 You can't really tell in the picture, but the house is huge -- over 2,000 square feet. There's a dining room fit for one giant, Catholic, homeschooling family to host another giant, Catholic, homeschooling family for dinner. The yard is over an acre, with plenty of room for my dream vegetable garden. The listing was understating things when it said there were 3 bedrooms -- there are three or four other rooms that could be bedrooms in a pinch.

The downside is, the listing was overstating things when it said there was one bathroom. That is only true if an unfinished room with three walls and several pipes jutting out of the ground is a bathroom.

Also, the kitchen is garishly hideous. 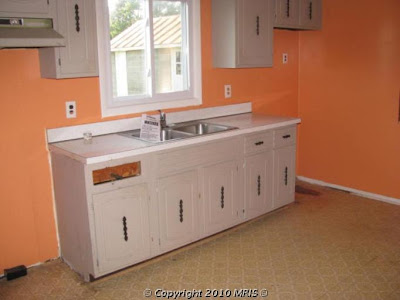 But then, I did say we wanted a fixer-upper!

We've gathered together our resources and made a bid on the house. We hope to get the final approval on a "rehab" loan, one where they will give us a certain amount of money back to get the house into livable condition. We also have to get a contractor out there to tell us what-all has to get fixed to bring it up to speed.

Perhaps we're being a little foolish. This is a big step.

On the other hand, though, what could be better? This house is being sold at about half its previous value, and will probably return to its old value once it has a bathroom and running water. It's one of the few houses you can even find that's good for a big family -- and, though we don't have one yet, I really hope we do someday, and I don't want to move houses again and again just because of size (as John's family had to do). It has character -- it's 101 years old. And there's so much to love about it:

This converted porch, which I envision as a sewing and craft room: 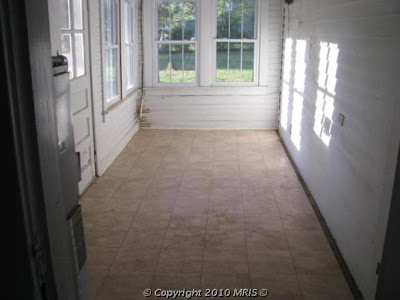 A large room that would work for a library/homeschool room.

A tiny room that would be a great office.

A little room filled with windows off the master bedroom, with seemingly no purpose at all, but which would be a perfect spot for a window seat.

Two garden sheds, one which perhaps might be converted into a playhouse?

That looks like an awesome house! Steve's extended family all live in the D.C. area and while we both love it out there, we know we couldn't afford a house out there as soon as we could here in MN. Crazy how location really ups the prices!

Hopefully you guys get the house!

It really looks lovely! I'm not sure how the kitchen got the way it did (LOL), but the rest of the house sounds wonderful. May St. Joseph be with you as you make your decision! =)

That is really gorgeous, despite all the fixes needed. I hope it all works out for you! We never wanted to buy but ended up doing so last year, and I really do like it. If there's one thing I'd do differently, though, it's more space. It sounds like you'll have a good space there!