Well, I've given up on going grain-free. That first donut was so delicious! And really, I feel just the same. John, however, is still sticking to it with no complaints.

I was getting tired of the repetition of shepherds' pie, chili, and hash, over and over again (since I dislike most pork and the baby can't handle chicken, ground beef is our only meat right now), so I decided it was time to start bringing back some of our other favorites. Number one on the list -- beef stroganoff! This meal is acclaimed as my family-of-origin's favorite food -- eaten at least every other week when I was growing up, often more -- and I really, really like it.

The first time I made it for John, I got the "what is this?" comment that every wife dreads. He referred to it as "goulash." And his stomach was upset afterward. (Now I know why -- the noodles!) So I served it only rarely.

It's not a meal that would really be okay if you just cut out the noodles -- it's almost like a sauce that way -- and it wouldn't go well with potatoes. So I replaced the noodles with mushrooms! Normally I make it with a small can of mushrooms, but this time I used quite a lot of fresh mushrooms, and that made all the difference. 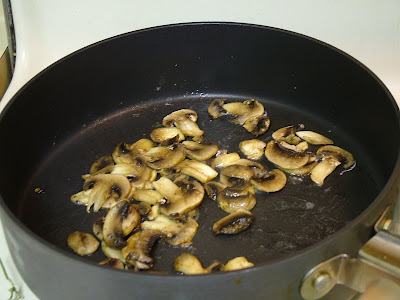 4 ounces fresh mushrooms
2 tablespoon butter
1/2 cup beef broth (I used my frozen broth cubes; you can use bouillon cubes and water if you want; I won't tell)
1/2 pound ground beef
1/2 onion (omitted this time due to the baby)
1 clove garlic (also omitted)
1/2 cup cooked (or frozen, which is what I always use) green peas
medium-sized handful steamed green beans
1/2 cup sour cream
seasonings, as desired
(All amounts, as always, are approximate, i.e. I totally just guessed)

Clean the mushrooms by wiping them with a damp paper towel. Do not immerse them in water, they're like little sponges and will turn just as slimy as canned mushrooms if you do! Slice them fairly thinly and saute them on medium heat in the butter until brown. You can do the onion at the same time.

In a different pan, brown the ground beef. Drain it thoroughly; the first time I didn't drain it enough and the result was kind of greasy. Remember there's all that butter in there too. Add the drained beef to the pan with the mushrooms, as well as the broth. Now might be a good time to add the garlic so that it can cook a little, but not too much.

Add the peas. Slice the green beans into one-inch segments and add them, too. Add the sour cream, making sure you have enough to turn the whole dish white. You might need a bit more than half a cup, especially if you love sour cream as much as I do.

Turn the heat down to low and heat just long enough to warm the sour cream. If you heat it too hot or too long, the sour cream will curdle (tastes fine, but the texture isn't so nice). While you're doing that, season to taste. I added salt, a tiny bit of chili powder, and, on a sudden impulse, red curry powder. It was good choice, especially as John loves curry.

The verdict? Success! John really liked it, I liked it, and neither of us felt the least bit sick! It is a high-fat dish, which means a small amount is quite filling ... this recipe could have served three (but ended up serving two, and then me again later).

I'm adding this to Wheatless Wednesday (though I know it's a bit late) on Naturally Knocked Up.
Posted by Sheila at 3:44 PM