I'm not much of a real foodie if I never make my own yogurt, am I? I figured I could save money by making my own, because I love whole-milk, Greek-style yogurt, and it's almost $5 a quart! So I decided to give it a go -- just doing a quart in case it was a flop. I used a number of tutorials, particularly this one.

I started with the last of my Cabot Greek Style yogurt. (This is the best yogurt I have ever had; you can eat it straight and it's delicious. Almost like sour cream, it's so creamy and good.) 2 tablespoons is all you need to make a quart. 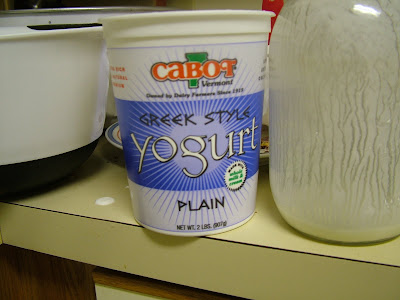 I started by putting the milk in a quart jar, and the jar inside my stockpot, to heat it up. 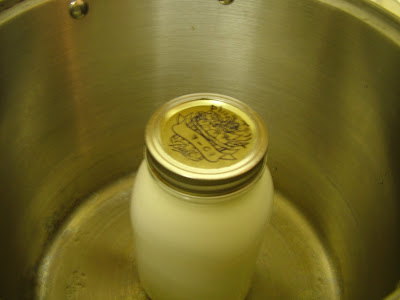 I added water till it reached most of the way up the side of the jar, and turned the heat to medium high. My goal was to heat the milk to 185 degrees. However, I don't have a thermometer, so I heated it till it formed a slight skin on top.

Then I let it cool for about an hour, until both the milk and the water in the stockpot were cool enough to touch easily. My goal was 90-110 degrees; my test was whether I could comfortably keep my hand against the side of the jar or immerse it in the water.

Once it was cool enough not to kill my friendly bacteria (L. bulgaricus and S. thermophilus), I added the two tablespoons of yogurt and stirred it in. This was about 8 p.m. I put the jar back into the water-filled stockpot, and the stockpot into the oven, which I had heated up to 150 degrees and let cool off a bit. It was the best incubator I had, though next time I might try using a heating pad, as I've heard recommended as well.

In the morning (about 7 a.m.) I pulled the yogurt out. (Yogurt can be cultured from 4-24 hours; longer makes it firmer and more tart.) It was about as tart as I expected, though a bit thinner than I wanted. It was pretty easy to stir.

However, I already knew I was going to strain the yogurt. This is what makes Greek yogurt so thick, not the special cultures used. So I set up my strainer: a colander nested inside a bowl, with damp cheesecloth (i.e. a clean flat fold diaper) lining it. 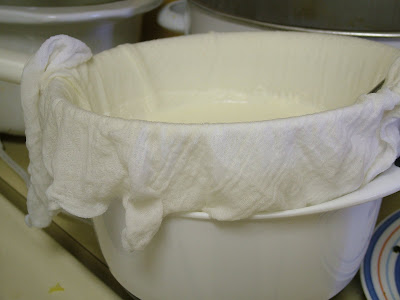 In a few hours, my yogurt had strained to the point I wanted. I got about half yogurt and half whey. (The whey is useful for lacto-fermentation, so I'm saving it.) 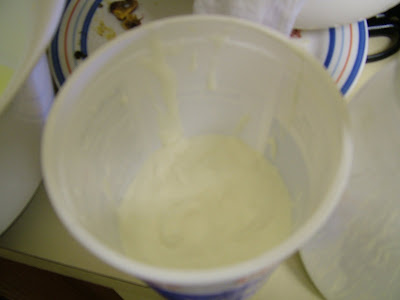 The final result? Well, not as good as the storebought stuff. That's to be expected, because the storebought stuff is made with "whole milk and cream," and I didn't have any cream. But it is delicious, and certainly better than the watery, sour, skim-milk yogurt I buy at Aldi. So, it ranked somewhere between the $5 stuff and the $1.50 stuff. Considering it cost me about $3.15 for a gallon of milk, a quart cost me about 79 cents. A savings for sure.

Next time, I'm going to try to improve my incubator and see if I can get firmer yogurt.
Posted by Sheila at 7:10 AM

sorry for the irrelevance... but is this someone we know?

Haha, yes it is! Where did you find it? That's my husband and sister-in-law. He walked her down the aisle at her profession.

Oh, Aunty Seraphic pointed to a whole album from the profession on Saturday, and first the name, and then your Mr. appeared... (they've popped up here on occasion, quite naturally).