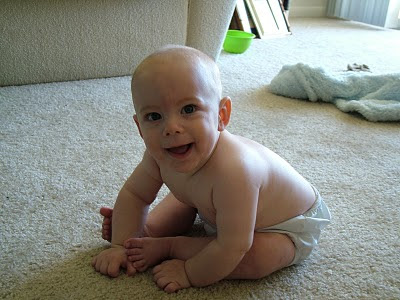 Houston, we have a sitter!
So, I said earlier that we'd be cutting out grains for awhile. How's that working out for us? Well, in my case, it's hard to tell ... because I keep cheating. I eat great at home, mostly, but then I go to work and there are cookies, or donuts, or something. It's not like I need donuts that much, but it's really hard-wired with me not to turn down free food! I'm just such a tightwad, and I originally worked there when I was single and trying to buy as few groceries as possible. So I ate tons every time someone brought food in for everyone. I figured I'd better make up for all those dieting teachers anyway.

I managed to stay grain-free for about five days running, and then I ate two chocolate donuts in a row and felt awful. However, that amount of sugar is bound to make anyone feel gross. I usually don't eat donuts anyway, because they do make me feel unwell. I did feel fine when going grain-free -- but then, I usually feel fine anyway. The baby's been in pretty good shape, though when I tried eating my homemade sauerkraut, he had a fussier day. Not sure if that's related or not. I haven't been brave enough to try any of the really irritating foods, like tomatoes or chicken, though once I manage a good stretch of grain-free eating, I hope to reintroduce them.

John's results were more clear. He started with no grains, but eating everything else more or less normally. He did eat a few cups of yogurt, at my urging, but it's not really his thing. Then on Thursday he had some vending-machine potato chips and didn't feel so good. I pointed out that they were probably full of artificial ingredients, and he decided to give processed foods a break as well. This is really hard for him, because he's accustomed to snacking on chips and things at work. (I really need to start making good lunches for him. If anyone has good ideas of things I can send, I'm all ears! My limitation is that, right now, I can't send soup because it always leaks in Tupperware and I can't give him a metal thermos because he has to go through a metal detector at the office.)

During the week he was going grain-free, he felt pretty good. He didn't mind the lack of grains much, since he prefers potatoes anyway, so we ate a lot of those. His IBS didn't flare up during that time, except a tiny bit after eating those chips. Then we went out to dinner with a friend on Saturday night. This friend chose an Italian restaurant. Do you have any idea how hard it is to eat grain-free at an Italian restaurant? We were starved when we arrived, so we ended up eating the bread while waiting for the food. Then John's meal arrived with pasta. In his place, I would probably have left the pasta, but he "felt bad leaving food on his plate" and besides, he has a big appetite, so he ate it all.

By the time we were driving home from the restaurant, he was already experiencing cramping. That evening he felt truly awful and had a bad IBS flare-up. It was enough to convince him entirely: grains are not his friend, and he's going to give them up. Now it's possible that a temporary abstention from them might heal him enough to handle small amounts without harm, but for now, we're going to aim for 100% grain-free. Later on we'll test gluten-free grains, but right now I think he's happy enough to feel good that he hasn't been complaining for different food.

However, he's in Italy this weekend seeing his sister make her religious profession, so we'll see the shape he's in when he gets back! I hear they met him at the airport with pizza. Ah well. Hopefully it didn't do too much harm.

So, John's experience with eliminating grains has been a success! Mine just needs more time. Since I feel fine, it's hard to be motivated. My one motivation is the thought of being able to eat more things I really enjoy if the baby stops being so food-sensitive. I would definitely rather be able to eat tomatoes and chicken soup and onions and eggs than bread ... at least ... I think so. In any event, it would be easier to think of healthy things to eat.

Here are a few of the things we've been eating:

Lunch:
Radishes and radish greens sauteed with bacon
Steamed green beans with butter and lemon pepper
Spaghetti squash with butter or cheese (was good the first few times, but I got tired of it)
Baked potato with mushrooms sauteed in butter

I've been getting much more into vegetables lately. I was raised with mostly frozen and canned vegetables, and it's been a huge revelation to find how delicious fresh vegetables are! Those green beans were out of this world ... I enjoyed them more than I generally enjoy dessert! The radishes were good too; I had never had radish greens before. And today I bought a few beets and am pickling them (by lacto-fermentation). Of course a few slices ended up in my mouth instead of in the pickles. But when they're done they'll be even more delicious than fresh beets, I think.

I'll keep you posted on how the grain-free diet goes!
Posted by Sheila at 9:30 PM

My husband also has IBS, so I feel intrigued reading this. Although I fear grain-free would be a hard sell, as he lives on bread. Still, it sounds like it would at least be worth a try.

I have heard of many people who have cured their IBS by going completely grain-free. It probably wouldn't work for everyone -- only those for whom IBS is a sign of grain sensitivity -- but it's certainly worth a shot! It's amazing how little you miss them when you're eating lots of good meat and veggies.

Is it a gluten thing, or grain full-stop? Having Bev here for a few months, we've learned a lot about the gluten-free lifestyle. At least John doesn't have to be dairy-free, too.

We're quitting all grains for the present, and will try re-introducing gluten-free grains later, since we're not sure what the problem is.

Yes, thank goodness we don't have to worry about dairy. We both seem to tolerate it fine (though John never drinks plain milk anyway).

Hm, for portable snacks, maybe raisins bought in bulk, or carrots (or other veggies and fruit) and dip?

I found that strongly flavored dishes (such as spicey or garlicy, etc.) taste just as good cold as warm. I've turned many soups into summer dishes by just simmering off some of the liquid or using less liquid to begin with, and then piling on top of lettuce. And if he can add some water to heat it up, then voila, it becomes soup again.
I just sent my hubby to work with mushy lime beans, sautéd veggies, cheese, greeens, and some yogurt (in lieu of sour cream.)

Soup might possibly be sent in a plastic screw-top jar if it's a metal issue. Just clean out what's left of the peanut butter and now it's the latest greatest soup tote. Provided, of course, he has access to a microwave.

That is an excellent idea! Thanks.