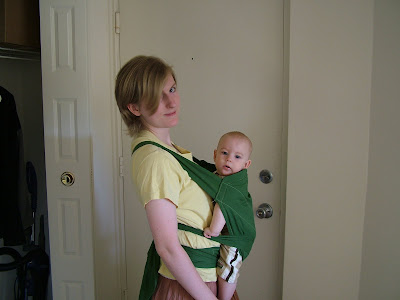 This isn't so much a tutorial as a bunch of pictures. I'm not particularly good at sewing, so I had no idea what I was doing. However, my mei tai did turn out great, and if you follow my advice (i.e., don't make the mistakes I did), you could probably make one better.

I used plain cotton broadcloth. This is too thin; you want something stronger like denim or another heavy, "bottomweight" fabric. But it was what I had. I used a double thickness everywhere (as you'll see), so it works for Marko now, but when he gets bigger, I'm pretty sure it won't be strong enough.

The neat thing about this pattern is that it uses the leftover fabric from making a woven wrap. If you get 4-5 yards (depending on your size) of 45" fabric and cut it lengthwise, one half can be your woven wrap, and the other half can make your mei tai.

Here are my fabric pieces, cut out. I have two rectangles, about 20 x 24 (which is much too large -- I suggest 18 x 20 for a baby Marko's size) to form the body. I folded down the top 3 inches, partly because my rectangles were too large, and partly to form a little extra support on that top edge. An inch would be quite sufficient. Then I have three straps, each about six feet by five inches. They were too narrow and a bit short for what I wanted -- I suggest seven feet by six or seven inches. The waist strap has both ends tapered; the two shoulder straps only need one tapered edge. In the picture, I've already folded the straps in half lengthwise and pressed them. 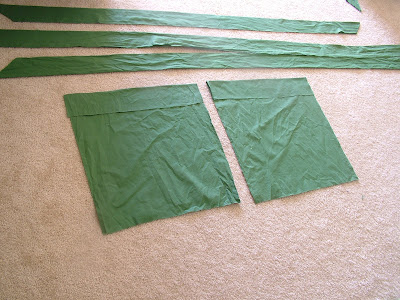 This is what I wanted to do: attach the shoulder straps at the bottom corners for extra strength. Only the straps I cut weren't quite long enough to do that. I would definitely advise doing this if you have enough fabric; it's a very strong structure. Plus, the stitching of the waist strap reinforces that corner as well. 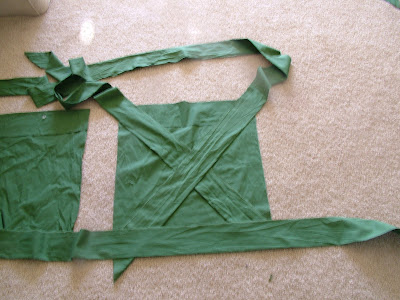 This is what I did instead: extended the straps down to form a V, and stitched them in place there. You'll see later how they're attached. This is more secure than attaching the straps at the top corners, and it adds some reinforcement against a baby who likes to lean back (which mine does). 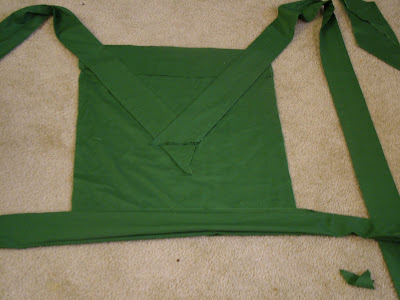 All right, so here's what you do. Press the straps in half lengthwise and sew along the fold. On the shoulder straps, stitch across the tapered ends and leave the flat ends open to turn. On the waist strap, stitch both tapered ends, but leave the middle 20" or so open -- you will be tucking the body rectangle inside this fold. Press in about 1/4" on each raw edge, so that you have a smooth edge all around. (In this photo, the bottom strap is the waist strap.) 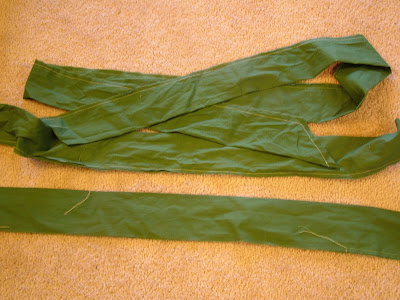 Now take one of your two rectangles and arrange the straps on it, either in the X I suggested or the V I actually did. Baste them there, on the wrong side (picture shows the right side). 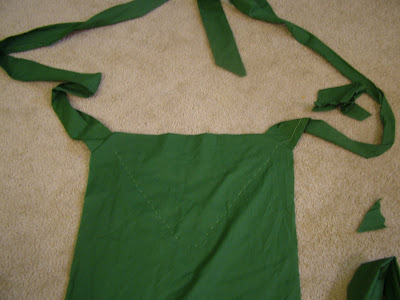 You'll want to turn the corners of the rectangle in where the straps emerge, like this. The little turned-in triangle is sandwiched between the body and the strap -- eventually it will get caught in all the stitching and held there. 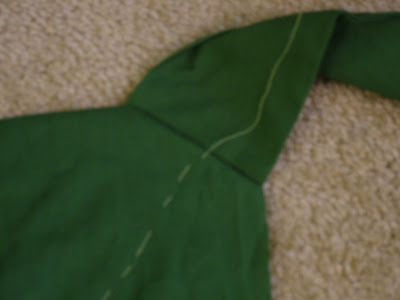 Now machine-stitch (or hand-sew) the straps into place. This will show on one side. I used contrasting thread to make the stitching part of the pattern. Trim any excess. 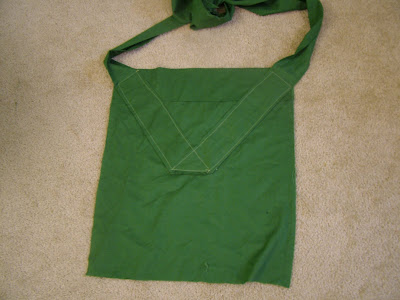 What appears on the right side: 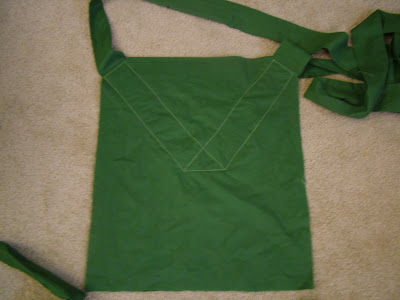 If you want a pocket, you should attach it to the other body rectangle now. A simple hem at the top and machine stitch around the other three sides is all it takes. That's not what I did, though -- I forgot to add the pocket till the end, so I had to do it differently ... shown later.

Then you sew your two rectangles together along the sides, right sides together. So your pocket and your pretty topstitching will be on the inside, and your strap ends and folded top edge will be on the outside. Be sure not to catch any part of the straps in your seam, because you'll need to turn them to the other side. 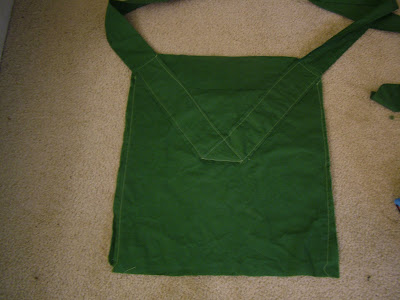 Turn the mei tai right side out and press. Attach the waist strap by sticking the body into the open edge and basting into place. Then topstitch around the waist strap, along the edges, along the top -- really anywhere that needs to be secured or would look nice. Before you begin topstitching, it's worthwhile to check and make sure your bobbin isn't about to run out, and watch to make sure your presser foot doesn't suddenly go all wonky and make 12 stitches on top of one another. This is another step I accidentally skipped. I had a lot of messiness and a lot of resewing. At one point I ended up backstitching a part because I was sure I'd mess it up if I used the machine! Any loose ends can get pulled to the inside, between the two layers, and left there. 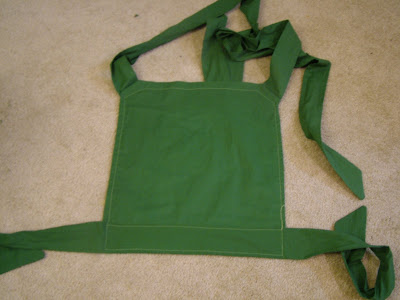 Wouldn't a pocket look nice here? Oh yeah, I forgot until now. So I cut a square of contrasting fabric, mitered the corners, and pressed the edges under: 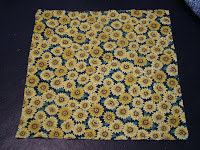 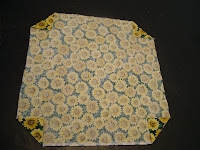 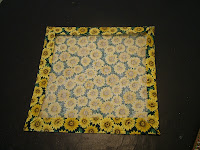 It took me forever to stitch it invisibly to the blank side of the mei tai. Don't follow my example -- add a pocket (if you want one) before sewing the two body pieces together!

Put the pocket a bit north of center; a lot of the mei tai ends up tucking under baby, so this position makes for an actual centered pocket. 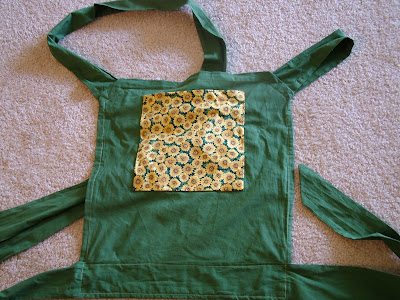 Except, of course, for your modeling shots: 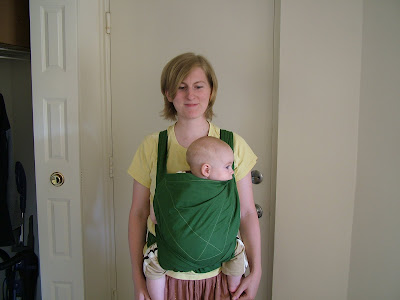 There are many ways to tie a mei tai, both on the front and on the back (and even on the hip, though I haven't tried it). This one's reversible, with the chevron pattern on one side and the pocket on the other. 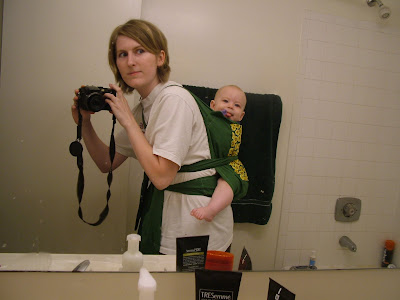 The couch is handy for getting down from back carries. 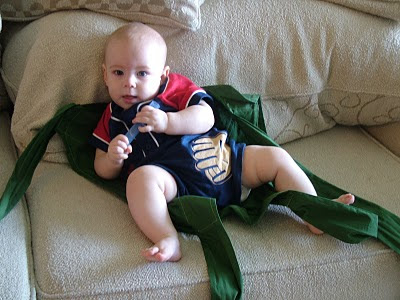 It might seem complicated, but it really only took me a few hours! I cut it out during a nap, sewed it after baby's bedtime before I went to bed, and did the pocket while he played on the floor today. And so far, it's working really well! I like having another option to take to work. I do need to practice a bit so I can get the baby nice and high on my chest (or back) on the first try. But, so far so good!
Posted by Sheila at 10:16 AM

Is that a "pppbbtbptbtpbttt!" in the penultimate photo? Is it that he likes playing, or is he enjoying the mirror, or ... ? Such a happy little boy, whichever way...

Cute! I like how he's grinning in the photo of you guys in the mirror and him on your back.

How much room did you leave for his legs to go through?

He just sticks out his tongue a lot. I'm not sure he "gets" mirrors yet, but he does like them.

Heather, if you look at the mei tai unwrapped, you see there aren't any leg holes. The straps just go around his legs -- one set over and one under -- so there's plenty of room for them.

Oh! Now I see! For some reason, I always imagined mei tais as a big pocket that the baby sits in. This makes much more sense now for growing babies.

Your babies are so adorable! God bless them! I absolutely love Mark's little tongue sticking out!