Before the invention of refrigeration, people had a myriad methods of preservation. All winter long, there were no fresh vegetables to be had. They needed to preserve the summer's bounty to enrich their diet in the winter. Some foods, like apples or onions, keep all right as they are. Others need more careful preservation.

Salting was one method -- often used for meat. Food would be so heavily salted that the salt needed to be rinsed off before eating. Salt pork is one example of this.

Other foods were pickled. Today we think of pickles as vegetables that are bathed in a strong vinegar solution before being canned. However, traditional pickling methods -- often called refrigerator pickles, crock pickles, or lacto-fermented foods -- don't use any vinegar at all. Instead, they rely on friendly bacteria to provide the acidic environment that hinders spoilage.

Foods fermented in this way include yogurt, pickles (cucumbers, beets, etc.), and sauerkraut. A salty environment hinders the growth of harmful microorganisms while allowing friendly bacteria to grow, lactobacilli such as acidophilus and bifidus. These bacteria produce lactic acid, which preserves the food and makes the environment much too sour for harmful bacteria to grow.

From what I've read, these bacteria (and the lactic acid they produce) are also excellent for human digestion. The friendly beasties live inside the human GI tract and help digest foods we can't -- like certain kinds of fiber. They keep the environment of the GI tract sour enough to hinder growth of harmful microorganisms, from E. coli to yeast (candida). Sometimes people who have gone on strong antibiotics experience diarrhea, lactose intolerance, and other ills because their friendly bacteria have been killed along with the harmful ones. In these cases, eating probiotic foods like yogurt or lacto-fermented vegetables can be a surefire cure.

I've tried this method before, but without success. I made cucumber pickles, and either something was wrong with them or with me -- they made me throw up! It was probably the morning sickness, but I ended up tossing the jar out all the same.

This time, I decided to follow the directions more carefully. I was going to make sauerkraut!

I decided on sauerkraut because of all that cabbage I bought (yum!). And I chose to lacto-ferment it to make it a bit more digestible (it seemed to be giving the baby a tummy ache) as well as make sure we had enough healthy bacteria in order to prevent yeast infections like thrush. Besides, this is something I've wanted to do for a long time.

The method I used includes whey, in order to introduce friendly bacteria and shorten the fermentation time. Whey isn't sold in stores, but it's easy to obtain: simply line a colander with a damp cheesecloth (or flat-fold baby diaper ;) ) and dump in a quart of yogurt. Set the colander over or inside a bowl, and within several hours, you should have enough whey collected beneath. As an added bonus, your yogurt will now be thicker and less sour, like Greek yogurt. If you leave it longer, you may get cream cheese! (Note: the ends of the cheesecloth must be inside the colander, or the whey will just end up on the counter. Guess how I know this.)

Here's the recipe, which I got from here and cut in half:

Shred the cabbage or chop it finely. I started by doing it in the food processor, but found it quickly turned my cabbage into tiny cabbage crumbs, so I did the rest of the cabbage by hand. The onion and the carrot I did want finely chopped, so I used the processor for those. Everything goes into a big bowl, along with the whey and the salt. 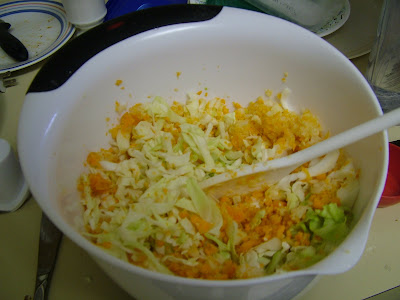 Mix everything well. Then you have to start pounding. I started with this "wooden" spoon and used a potato masher later. The goal is to extract the juices from the vegetables. The salt does some of this job, so you save some effort if you take your time. A couple minutes of pounding, let stand for ten minutes, a couple more minutes of pounding ... overall it took about half an hour. You know you're done when the juice is splashing over all the vegetables when you pound.

Then put the kraut into jars. The recipe makes about a quart, so two pint jars were all I needed. You may need to pound a little more once it's in the jars (the wooden spoon worked well for this) to make sure the juice comes up over the vegetables.

My recipe insisted that my vegetables remain submerged to make an anaerobic (airless) environment for fermentation. That didn't seem necessary to me, since sauerkraut was traditionally made in an open crock, but I decided to trust my recipe. It takes a long time to make sauerkraut and I didn't want to wait all that time only to find it had been ruined! What you do to make sure they stay submerged is nest a small ziplock bag into the top of the jar and pour water into the bag. The bag expands as it fills up and squeezes out all the air pockets. Soon you can see the juice coming up the sides of the bag instead of air. Close the ziplock, pushing out as much air as you can, and fold the bag into the jar. Then put the jar lid on.

Then leave the jars in a warm, dark place. You can see them nestling in my cupboard next to the sourdough. 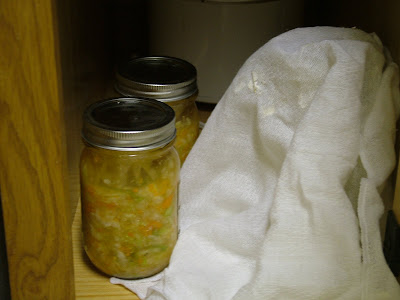 Leave for three days to get the bacteria going. Then move the to fridge. You can eat it at this point, but it's not very sour ... just salty and kind of funny-tasting. So I recommend exercising patience and waiting a bit longer.

It's been a week now that the kraut's been in the fridge, and it's developed a nice sour taste. However, it's not nearly as sour as storebought (vinegar-pickled) sauerkraut. I'm sure it will get a bit more sour the longer I leave it; however, I hear lacto-fermented foods are never as sour as vinegar-pickled foods. It's a milder flavor, but also a bit more interesting ... not brash and strong, but allowing the original flavors to come through while adding a lot of new flavors. 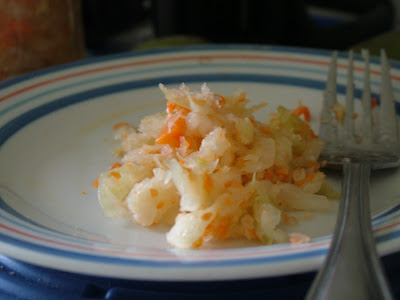 Something interesting I noticed is that the sour flavor really resides in the food itself, not the juices. Those are a bit sour, but not as sour as the cabbage. The carrots cut the sourness a bit, as they are sweeter, and the onions add a different tang. All of the vegetables, as you may have noticed, are raw, but with the fermentation they don't quite taste raw. However, they're still crunchy and much more flavorful than cooked vegetables.

I don't really know how to describe the flavor beyond that. It really didn't taste like the sauerkraut I'm used to. Perhaps it would be more familiar if I'd used just cabbage, and left it for longer. I'm not all that patient, but one jar is still unopened, so I'll have to see if that one's more sour.

Sauerkraut is excellent alongside bratwurst. In fact, this traditional combination is very sensible, because the acids and bacteria in sauerkraut spur the digestion, helping your stomach handle the heavy bratwurst. I have a hard time handling bratwurst myself, so I'll have to try it with sauerkraut and see if that goes down better! Sauerkraut is intended to be a condiment or a small side-dish -- it probably wouldn't be a good idea to eat the whole jar in one go. Try it alongside heavy or fatty foods.

All in all, my first lacto-fermentation success was very easy. You don't have to be scrupulously clean and sterilize everything, like you do with canned foods, because the salty environment keeps nasty bugs at bay. I did rinse off the vegetables, but there's no need for boiling. The results do need to be kept cool in a fridge or root cellar, and they don't last forever, but through the winter is all that was really necessary for our pre-refrigeration forebears. In any event, I was pleased with the results that a half-hour's work got me. I definitely recommend making this!
Posted by Sheila at 8:48 AM

Good for you! I really want to try this, but I am scarred of doing it incorrectly and having all the wrong things growing in the food.

Was your yogurt homemade?

It was much easier than I thought -- I suggest you just go for it! Making a small recipe, like I did, reduces the failure if you do mess up.

I actually just used regular plain yogurt from Aldi. Just about the lowest quality you can find. Normally I hear Stonybrook Farms or other organic yogurt being suggested, but I worked with what I had.

Do you know if using flavored yogurt works or if the flavoring process somehow changes the yogurt? Not the ones with chunks of fruit in them; just the ones that have had fruit byproduct blended within.

I wouldn't do that. The flavor goes throughout the yogurt, including the whey, so you'd end up with pretty fruity sauerkraut. :P Other than that it would be fine, but the taste would carry over, I'm pretty sure.