I'm always talking about my chicken stock, how easy it is, how it uses scraps I wouldn't use otherwise, how many dishes I can make from it, and so forth. I may or may not have mentioned how extremely healthy it is, extracting nutrients like calcium and gelatin from the bones and cartilage. I'm a shameless carnivore, but I do believe in using every part of an animal if you're going to kill it, just like you shouldn't cut down a tree and not use the wood. Maybe it's the Native American in me (oh, you didn't know I was part Native American? It's a small part, obviously).

Anyway, as I was making it this time, I figured it was high time to give you guys some pictures. As I know from hard-earned experience, not all chicken stock is created equal! I've made greyish, cloudy, watery, flavorless stocks and I've made stocks that were a flavor explosion. Luckily there is a science to it, so I now make good stock every time.

Step one is the right ingredients. In addition to the carcass, picked mostly clean of meat, I always add half an onion and one carrot, if I have it. It really makes a difference. Any giblets I have (this time I didn't have any) go in too, except the liver. I've found it doesn't matter whether they are raw or cooked, even though the Joy of Cooking warns me my stock will be cloudy if I put them in raw. It never is.

The Jello-like thing in the crockpot is the drippings from roasting the chicken. I poured them into a cup when we took the chicken out to carve. There was about half a cup of fat that separated out, which I scooped out and threw away (chicken fat just isn't that useful, I'm afraid (or at least I haven't found a good use for it yet)). You'll notice it's solid, like an aspic -- this is due to the gelatin in the cartilage, which is very good for you. 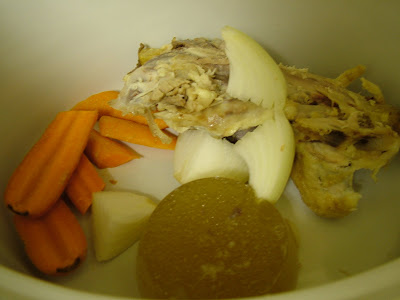 I add two quarts of water, plus a little for when it evaporates a bit. I find I really do have to measure the water, because too much makes a watery stock, and too little won't yield enough stock for two soups. 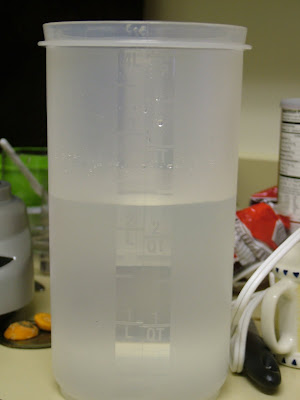 I also pour in about a tablespoon of cider vinegar. This helps leach the minerals out of the bones. 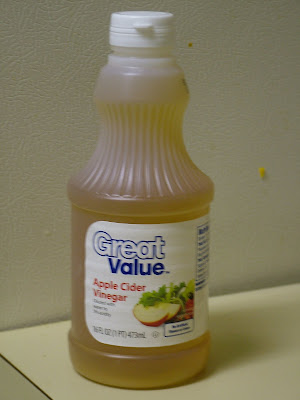 It's supposed to soak with the bones for 30 minutes, but that's about how long it takes the crockpot to heat up, so I just turn the crockpot on once all the ingredients are in. 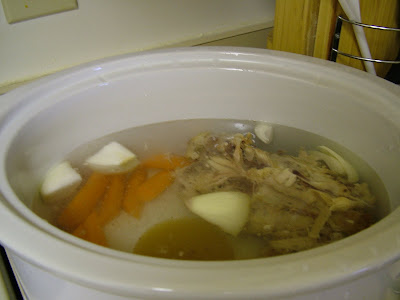 I turn the pot on low for 8 hours. More doesn't hurt anything either. But high must not be used, because if the stock boils, it gets cloudy and doesn't taste nearly as good. Bleck. Also, my other crockpot, which only has one setting, is also too hot. The stove works fine if you can watch it and make sure it only simmers, not boils, and that it doesn't evaporate too much, but I never have that kind of attention to spare. 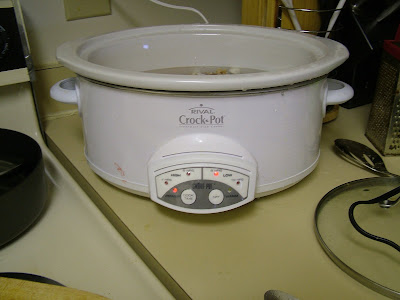 When it's done, I pour it into jars, or cool it and pour it into yogurt containers if I don't have jars to spare. (It's important to cool it first if you do this, though; otherwise it takes on a plasticky taste and probably some chemicals as well.) 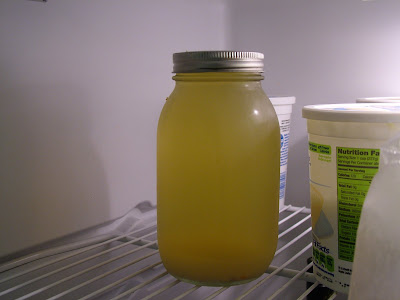 There it is, golden and delicious! I didn't strain it this time, so it has a little sediment on the bottom. If the carcass comes apart too much, I sometimes do strain it. This recipe made two quarts.

Here's a good recipe to use chicken stock in:

Melt some butter in a saucepan that has a lid, maybe a tablespoon or so. Add the amount of uncooked rice that you're going to want to eat. (John and I eat about 3/4 cup, uncooked, between the two of us.) Cook the rice in the butter until it is golden and smells heavenly. Then start to pour in chicken stock. Start with twice the amount of rice, and leave it for 15 minutes or so, covered. Once all the stock is absorbed, add a little more and stir the rice. Keep adding and stirring until the stock stops absorbing and the rice is nice and wet. Then add a little shredded chicken, some peas, and a lot of curry powder and salt. Sauteed onions might be nice too. Yum!
Posted by Sheila at 3:44 PM

Thanks for sharing this! I didn't realize it was that easy to make chicken stock!

My father-in-law would tell you to cook with the chicken fat. He is a convert to Christianity from Judaism, and so Sam's family occasionally prepares some Jewish foods, including fried matzo (scrambled eggs cooked with crushed matzo crackers and water). Sam's dad claims that the best, most authentic fried matzo is cooked in chicken fat. You can actually buy frozen chicken fat at Wegman's. I wonder if it's a Jewish thing?

I use up all the drippings to make gravy when I roast a chicken. Will the stock be okay without it?

Just less flavorful. The drippings are so delicious; I always wish there were more of them!

Hm, that is a use for chicken fat. The problem with it is that it has a very low smoke point so it can't be used for high-temperature frying (as I learned when I tried to make fried chicken with chicken fat). I do occasionally cook eggs with it, and once used it to make dumplings. It probably is a Jewish thing, though -- I never knew anyone else who used it.

Beef tallow, on the other hand -- that is a very useful fat! The best french fries are made with it, and I also use it to saute onions.