My last post was about cutting out dairy in the hopes of helping the baby like nursing again. With no idea what the problem was (reflux? stomachache? behavior issue? funny taste?) I had no idea where to start, but I have heard that people have had good effects with cutting out dairy, so I decided to go with that.

A few days later, I decided the smart thing would be to go a step further and go on a total elimination diet, cutting out anything that could possibly cause a problem. Elimination diets have three levels of severity.

1. Cut out common allergens and irritants. The most common problem foods for babies are milk, wheat, corn, peanuts, cruciferous vegetables (like broccoli and cauliflower), onions, garlic, spicy foods, tomatoes, chocolate, citrus, caffeine, and soy. The last two weren't really an issue for me because I don't like them anyway.

2. Cut out anything you've ever heard of anyone being allergic to.

3. Cut out everything except for a few well-tolerated foods. This is what I did, when I started this diet. It's important to note that you can't do this for an extended period of time -- variety is the spice of life as well as being important for your health. So you wait for the symptoms to subside and then add foods back in, one at a time. It takes 2-24 hours for a food to affect the baby, so I could only reintroduce one food a day if I wanted to be sure I knew what the problems were.

I kept a careful journal of everything I ate and everything the baby did. I kept track of when he was nursing, how many diapers he was using, how fussy he was, how much he slept, and any other notable symptoms like spitup and diaper rash. I tried to connect problems we had with foods that we ate. John was out of town doing his grad school orientation, so I really had the freedom to eat whatever, whenever, and do nothing but watch the baby. I didn't even have the computer to distract me, since John brought it with him.

Monday: I ate what I usually do but cut out dairy. Marko was grouchy in the morning, happy in the middle of the day, and horrible in the afternoon. I noticed that the screaming started a short time after I had had a bean burrito with salsa. He'd been nursing fine, but that time I tried to feed him, he seemed to be interested, but then he spit out the milk and screamed. So, no more salsa. I put onions, spicy foods, and tomatoes on the blacklist along with dairy.

Tuesday: I ate what I usually do, but without dairy, onions, spicy foods, or tomatoes. This meant I ate a lot of eggs and pbj's. Eggs and peanut butter are the two foods that give me acid reflux. I have no idea why. In any event, I had reflux and the baby was as grouchy as ever. Every nursing session was a struggle. So, either the diet wasn't helping, or it hadn't had time to work yet. I decided to go to level 3 the next day and cut out almost everything. I really wanted to know if food was a contributing factor or not.

Wednesday: The breakthrough day. I ate oatmeal, rice, rice milk, potatoes, and chicken. I was starving and fighting food cravings all day. But it worked. Marko was much happier, though he had three shortish screamy periods. All of them were after eating chicken, but he was also tired for all of them. So I wasn't sure about the correlation, especially as chicken is supposed to be very mild. I did cut it out though. 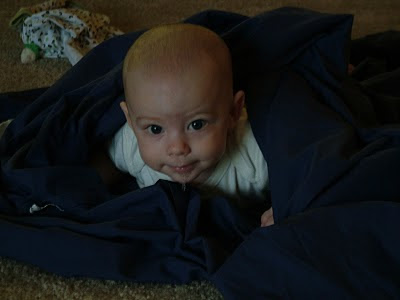 His diaper rash was absolutely gone when I changed his diaper Wednesday morning -- which was a huge success sign for me! However, it was back by late afternoon. I'm not sure what that means, because I don't know how long it takes a food to cause a diaper rash. There could be a lag of hours or days -- I just don't know (and I had no internet, so I couldn't look it up either). But another physical sign was spitup: he barely had any -- a huge improvement, as he'd been getting very spitty lately.

Thursday: After a lot of pondering, I decide to add dairy back in. I do know that it can take much longer than that to rid dairy from the system, but looking back, I remembered that the one day where he was so good, the day I thought I was cutting out dairy, I actually ate a ton of cream cheese because I forgot that it was a dairy product. Yep, I'm oblivious. So I decided to add it in, particularly so I could have a protein and fat source instead of living completely on starches. The cheese was delicious, and I felt much better (more on that in another post!).

The effects on the baby remained good. He hardly cried at all the whole day -- a VAST improvement. On Thursday morning, I read through the record of the previous day and realized that we'd had one really good nurse every two hours or so. So I stopped offering nursing so often and tried only every two hours. That helped a ton -- he nursed happily each time. Once I offered five minutes too early and he turned away screaming, but five minutes later he was all for it!

(Note: The every-two-hours schedule is working great now, but it didn't work at all a month ago. Then, he wanted to nurse every 45 minutes. I think my milk supply was down back then (it was right after we'd gotten back from our trip) and he was building it back up. Now, the milk supply is finally restored a bit and so every two hours is working fine. I also wonder about the reflux issue -- babies with reflux tend to eat very frequently. So if that was a problem before and is better now, no wonder he can go longer.) 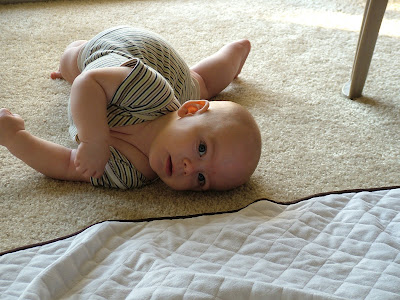 Friday: I added back in bananas and apples -- because I can't go forever with no fruits and veggies -- and Marko was great again. No spitup, rash fading again, no trouble nursing, and happy almost all the time.

Saturday: Reintroduced peanut butter and jelly sandwiches. I know that's a lot of ingredients, but I almost always eat them together, so I figured it was worthwhile to try them together. If there was a problem, I could cut the pbj's out and add each ingredient back in, one at a time. But there was no problem. Marko was great, we enjoyed our day, and his diaper rash was pretty much gone again. A couple times he was a little reluctant to nurse, but I took him out on the back porch and nursed him in the fresh air (he loves to be outside) and he was fine.

Sunday: A lot was going on, since John came back home, bringing his brother along for dinner, so I ended up eating a number of different things. At lunchtime I had eggs. By about four o'clock he had spit up a number of times, although he wasn't upset. So I decided to cut the eggs out again. After all, they do give me reflux. I'm not sure why eggs would be an issue, but why push it? I cut them out again, and won't be reintroducing them (except in bread, which seems to be fine) for at least another week or so. For dinner, I had hamburgers, with lettuce and a tiny bit of mustard. Those didn't seem to cause any ill effects that I could tell. Again, Marko was great. He was delighted to see Daddy and quite willing to make friends with his Uncle Thomas. I was so glad to see him so easy to please!

On Monday I stopped keeping the journal. I had a really busy day, driving my brother-in-law to Christendom and picking up a crib I got on Craigslist. But Marko was a little trooper. He slept in his carseat, ate a ton at more-or-less two-hour intervals, and didn't cry a bit! A lot of people at Christendom asked how he was doing, because they've been following his issues on Facebook, and I was proud to report how well he's been feeling and acting!

I'm reintroducing one food a day, and keeping a record of which food I introduced on each day so I am able to retrace any problems. But so far, we're doing great! I still don't know for sure whether food was an issue (though I think it must have been, seeing how quickly I saw results) or what the food might have been (though eggs do seem implicated). But we're plugging along, and as long as I have a happy baby, I'm not worried!

Now I only have to worry about the sleep he's getting. Now that he's rolling over, he's always waking himself up. Ah well, a mother's work is never done!
Posted by Sheila at 7:12 AM

This woman has much wise advice; not necessarily for your nursing troubles, but nursing in general: http://ourmothersdaughters.blogspot.com/2010/08/8-random-nursing-tips.html