We are just over a month away from that magical six-month mark when many people introduce solid food. We may wait a little longer, due to all the trouble we've had with food sensitivity, but either way it won't be long before he gets his first bite.

I'm kind of stuck, though. There are two schools of baby-feeding which both really appeal to me.

First is the real food way, as explained by Nourishing Traditions. I've seen similar suggestions online, from a "primal food" blog, for instance. These people suggest that grains, however popular, aren't the best food for a baby whose GI tract is still developing. Babies don't really digest grains very well, and they tend to cause constipation. Rice cereal, oatmeal, cream of wheat, etc. aren't the best thing to start a baby off on. Instead, they recommend egg yolk and pureed meats first -- these animal foods are more digestible, more similar to breast milk, and more nutritious. They are also high in iron -- which is important, as breastmilk is low in iron and a baby's iron stores only last six or eight months.

Second is the baby-led weaning way. This method teaches that babies should feed themselves from the very beginning: no purees at all! You wait until the baby is reaching for food on his own, and then you give him things he is able to pick up and eat. Cheerios and soft vegetables are popular. I remember my little brother would chomp on a great big carrot, scraping off tiny flecks of it with his two teeth. Choking isn't a big danger (though of course you should always supervise a beginning eater) because babies will push food out of their mouths with their tongues at the age when their gag reflex is undeveloped. The pincer grasp appears around the time the tongue-extrusion reflex disappears and the gag reflex develops -- so when the baby is able to feed himself, it is safe to let him have food. Feeding purees with a spoon can force a baby to take food into his mouth before he's ready, and so choking is more likely.

This system really appeals to me because it allows a baby to learn to eat instead of having food ladled into him by someone else. Babies are born with a good sense of appetite -- which is why you can't overfeed a breastfed baby who nurses on demand. I would like to preserve that instinct the best I can. I myself rarely eat when I'm not hungry, but many people are in the habit of just munching away because it's "time to eat" or because the food is there. I think that attitude is encouraged by spoonfeeding, while baby-led weaning encourages an attitude of eating when you're hungry.

Here's the problem: egg yolk and pureed meat are hardly the kinds of things a baby can feed himself. (I'm also not going to introduce egg yolk too early, as eggs seem to be an issue for baby when I eat them. Most likely it's the more allergenic white that is the problem, but I don't want to take chances.) But -- as I know from experience -- vegetables are not easily digested. (If you've ever changed a six-month-old's diaper, I don't think I need to say any more.) Neither are grain foods like Cheerios. Do I give him well-cooked pieces of beef and chicken? Or is it okay to give dairy so young? Or are there are any vegetables that digest more easily than others?

All right, real-food types, baby-led-weaning types, and everyone else: what do I feed baby first? In time, of course, he'll be eating what we eat, but what are good starter foods? I want foods that are digestible (so as close as possible to breast milk), hypoallergenic (for a boy who seems to react to eggs, tomatoes, onions, and cabbage SO FAR), and easy to pick up and gum on. Any ideas? Of course I'm going to make all his food myself, so anything you can think of is a possibility. 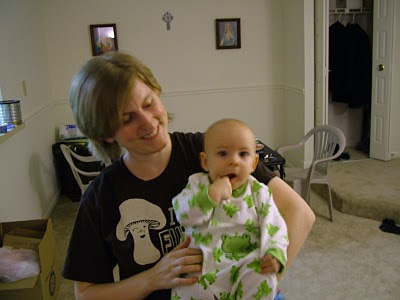 Tell me, what should I put into this adorable little mouth?
Posted by Sheila at 2:58 PM

We did baby lead weaning within the WAP guidelines. We didn't offer any grains at first (I think you're not supposed to intro grains until 2 years). Our naturopath said to wait for meat until 12 months as well. First foods I offered: Butternut squash, well cooked carrots and broccoli, barely cooked egg yolk (the yolk is said to be less allergenic). I used sea salt to taste on their veggies- which they LOVED.

I'm not sure I'll ever be able to 'swallow' the WAP suggestion of egg yolk with grated liver starting at 4 months- I prefer to just wait until baby is putting food in their mouth on their own, which mine didn't til about a year.

We pretty much did baby led weaning. I gave them whatever we were having for dinner in sizes small enough for them to handle.

I will say that I did the egg yolk and (separately) plain yogurt. My kids LOVED them. That was about all with the baby spoon.

I nursed exclusively with both babies until 7-8 months. With both I did a lot of homemade puree cubes in this: http://bit.ly/8ZJku6. (alse a huge help with teething) I started with cooked, pureed apples and pears, but quickly moved to soft whole foods: bananas, avocado, potatoes. We did flaked rice cereal for about 10 minutes, both kids hated it and we moved on... (but well soaked-in water only, no acid)-for about 4-6 hours and cooked arborio + puree fruit was a super hit

Cara -- thanks! Do you know why she said no meat till 12 months?

Hallee -- the "eating what we're eating" idea is my goal. I do want to be slow in introducing things, though, because of allergies. Hopefully by a year or so he can eat what we're eating (which isn't terribly varied anyway).

I'm a La Leche League gal and advise soft mushy fruits and veggies. Yams, sweet potatoes, regular potatoes, cooked carrots, bits of cooked broccoli, avocados. blueberries, cooked apple, peaches, bananas, etc. No citrus, and no other allergenic foods, like eggs. I have also heard no meat, which for me as a vegetarian was fine, but small chunks of chicken and (dare I say it?) lamb were supposed to be good around 8-9 months. Just start them with fruits and veggies from 6-8 months. I also gave my own mushy cooked grains like rice and oats. But that was just me. :) Oh, and of course tons and tons of breast milk. :)

this is a little late (over a year!), but I thought I would chime in. No meats till 12, or as our osteopath suggested, 18 months, is usually recommended because of the baby's in ability to properly digest the food. Ever not eat beef for a long time and then try to eat it again? People usually get sick and it "goes right through them" to put it politely. So no real nutrients are absorbed and it can create digestive issues.

With Miss E, we didn't introduce poultry till 18 months and at 26 months, she still has yet to try beef or lamb (other than the occasional bits of ground lamb she gets when eating my lasagna.) At home we don't eat any beef and only occasionally eat lamb.

With B, who is now almost 10 months, he has only had mushed up whatever we eat sans the fish or meat. I would run it through my little Munchkin food grinder (which I LOVE!!) and he can go to town on it. Also, I buy quinoa noodles or macaroni (which you can buy off of amazon or quinoa.net) and make a mac'n'cheese dish which he loves.

Hopefully after Marko, #2 will seem like a piece of cake. ;)

I'm sure they will, because I experimented so much on Marko! Marko barely tolerated anything at first except egg yolk, beef, avocado, and beans. Hardly the recommendation! Most vegetables passed through untouched, and many gave him rashes. Dairy, even the tiniest bit, gave him a bleeding rash. Fruits gave him chapped, red cheeks. But beef seemed to be digested very well! The same later with turkey.

For all I know, the next one will be opposite. But I've become an expert in food journalling and watching for reactions, so I should know early on if there are any problems with something I give him.

In fact, I'm probably going to start all that from day one, seeing the food sensitivities Marko had even while exclusively breastfed. Though perhaps the next one will have fewer problems anyway, because I'm eating so much better. I sure hope so!