Marko had a wonderful day Friday. He nursed like a champ, smiled pretty much the whole day, and hardly even fussed. From Thursday afternoon to the middle of Saturday morning, he was just perfect. I had tried a number of things those couple of days, from cutting out all dairy to eating oatmeal (supposed to increase milk supply) to working on our latch. Since the change was so instant and dramatic, I credited the techniques I'd been using to bring him to the breast. I went back to having cereal and milk for breakfast and didn't worry about anything else.

However, by mid-morning on Saturday, the good times were over. And by Sunday evening, we were back in the "absolutely no nursing" zone. I noticed a few things, including a slow let-down on my part (but only sometimes, and it might be triggered by the stress of him screaming at me ... hard to tell cause and effect) and a lot of spitting up on his part. When he was a newborn, he almost never spit up, but the amount he spits up has been slowly increasing for awhile. On Sunday he spit up quite a bit. I figured it might be because he is rolling around so much, but on the other hand, it does bring up the reflux question again.

Today I was thinking about all this while deciding what to have for breakfast: raisin bran with milk (which was what I wanted) or oatmeal (which I am not crazy about)? I remember hearing that 50% of reflux cases are improved by the mother cutting out casein, the protein in cows' milk. So I chose oatmeal, and furthermore have decided to do a few days' trial where I cut out cows' milk and see how I do. 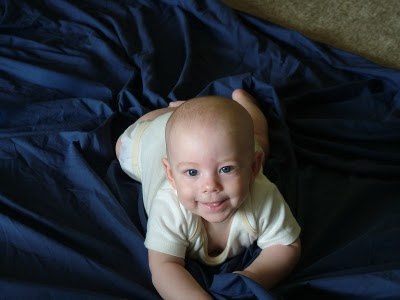 Baby has nursed fine the past couple of times and seems happy at the moment. Not much to go on, but it's a start. If I don't see improvement in a week or so, I'll probably give it up.

Because here's the thing: I love dairy. A lot. My favorite foods are ice cream, butter, sour cream, yogurt, and chocolate milk. Oh, and cheese ... all cheese ... all the time. If milk were alcohol, I would definitely I have to admit that I have a problem. When I make chocolate chip cookies, it's all I can do not to eat them once I get to the butter-and-sugar stage, and leave the rest of the ingredients out. When I make roux for a soup, I always just want to eat the roux. It's bad. At the moment I eat a lot of fat, because baby needs fat and so I crave it inordinately, but the only fat I really like is butterfat. I could eat butter straight, but who ever ate beef tallow straight? Olive oil is okay, but it doesn't really hit the spot the same way.

So I'm looking for ideas. I'm making rice milk at the moment, although I'm quite aware it's lowfat and not going to satisfy my butter craving. To start you off, I offer one milk-substitution recipe, which I am quite proud of having invented when John was on an elimination diet.

Melt the fat over medium heat. I used chicken fat when I invented it, and haven't tried anything else (though I may try ghee). Mix in flour to make a roux. Make sure the flour is totally incorporated. I sometimes brown the roux a bit; if you do this you will have a darker sauce. Then add the liquid, a little at a time, whisking after each addition and cooking a bit until you see no lumps before you add more. Stop when it's the consistency you like -- it thickens a little as it cooks.

Add this to soups calling for cream, or use as a base for a cream sauce over pasta. (My award-winning (i.e. both John and I like it) sauce for noodles is this cream sauce with onions, garlic, and chicken.)

Any other ideas? I would like recipes that contain some fat if possible. I don't generally eat soy; I don't care for it and I don't think it's all that healthy. But I'm not vegetarian or vegan, so meat is fine. So are eggs, which will probably be my salvation as I try to get by on this budget. However, I would love to hear your favorite nondairy recipe, whatever it is!
Posted by Sheila at 1:15 PM

I would like to suggest almond milk. If you get the unsweetened kind, it's great if you find the sweetness of rice milk overpowering. Also, you might try goat's milk or goat cheese to see if it's specifically cow-dairy. It's a little pricey but if it helps it might be worth it. Good luck!

Almond milk is great - and high in calories. It is expensive though but you can make your own (and then use the almonds for something else). If you google almond milk recipe you'll find loads of options.

I too have a craving for anything dairy (remember how i used to go to martin's and bring back lots of cheese for that mini fridge steph and I had? ^_^ ), so I know how austere it must be tp go without. To get that richness, I would go for recipes that use coconut milk or tahini (sesame seed butter). try making hummus or baba ganouj w/ tahini, curry or coconut rice w/ coconut milk.

I echo the coconut milk. Stored even carry coconut milk ice creams now, although they are very expensive.

The spitting up made me wonder: was it foreceful? Or the normal baby dribbly type?

You might not have to worry about cheese, yogurt, sour cream, et cetera since the processes by which these are made makes the casein (and other components) more readily digestible--for example, my sister was lactose intolerant when she was younger, but she rarely had an issue with cheese and yogurt. Obviously, the reflux may not be lactose intolerance, but it certainly can be related the ability to properly digest the dairy components.

I hope this helps.

Cheese is actually supposed to be WORSE because the casein is concentrated.

It's a good thing I like coconut milk! But a shame it's so pricey.

Beth, it was normal spitup, just a lot of it.

Sheila, the last article I read on this subject said that you would steer toward the fattiest dairy products possible--since casein is a protein, the more fatty the food, the less concentrated the casein.

I'm not here to be helpful, as all this is new to me, but I have to say how much I love this post's picture of Marko! He is definitely showing more personality here. Every time I come back to your main page to check if you have something new, I scroll down just to see his cheeky smile. =)

I know it's a bit controversial, but have you tried raw milk?

Fidelio -- that's what I've heard too. In fact, I was considering making clarified butter, which contains no casein at all. But instead I ended up doing a challenge after a few days and finding dairy didn't seem to be a problem at all -- go figure! I wrote all about it in a new post.

Enbrethiliel -- I love this picture so much! I keep looking at it every time I visit my blog too. He's been smiling like that for awhile, but with so much fussing interspersed it can be hard to get a good picture. Thank God he's feeling better lately!