In my ongoing quest to keep my sourdough starter alive, I made sourdough crackers today using this recipe. Instead of lard I used butter. My rule of thumb is that you can never have too much butter. Blending the butter into the sourdough starter was difficult, though -- I wondered if I was expected to use a mixer, or have the butter softer than room temperature. In the end I did a very haphazard job, and it turned out fine.
You're supposed to leave the dough to rise for 7 hours. Due to several delays (mostly baby-related) I didn't finish till one, and I wanted to cook them before John got home, so they only got 4 1/2 hours of rise time. To make up for it, I let them rise in the warmest place I could find -- outside! It's been in the nineties. I just put the bowl in a plastic bag. When I brought it in at 5:30, it was warm, probably twice as big, and very foamy in consistency -- full of great big air pockets. Excellent rise! My sourdough is finally alive.
With my Silpat and rolling pin (or, as my Grandma J calls it, "spousal realignment device," haha) it was way easier than I thought it would be to roll them out. Took only a minute or two with each batch. (The recipe made three batches.) 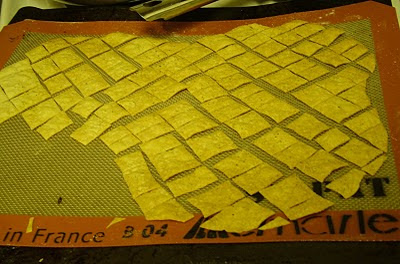 Instead of plain salt, I sprinkled them with adobo. Yum! 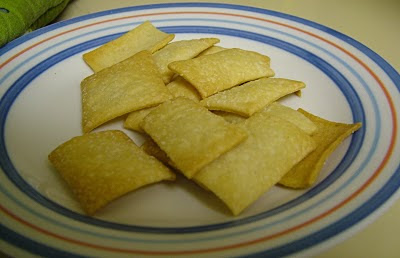 They were delicious and very crunchy! Just like Wheat Thins, only better. (Though John's response was, "I could have bought you crackers." He misses the point, I think.)
Posted by Sheila at 10:32 PM

Sheila, this description makes me want to try to make them. And they look so pretty too!

I could have bought you crackers.

HAHAHAHA!! Oh, that's too funny..."I could have bought you crackers."

I've gotten that a couple times. :D Crackers sound yummy, too, by the way.