As promised, I tried those garlic knots again. I followed my modifications from last time, and they turned out great!
First change was pouring off the "hooch" or dark, sour liquid at the top of my starter periodically. I did it every couple of days. This made the knots much less sour, and made my flour-to-water balance just right. Instead of a wet, sticky batter, I got this: 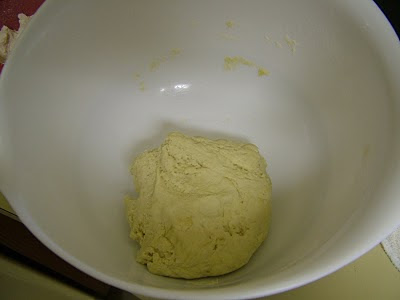 It was not at all sticky, and was easy to knead. (Shown here is half the dough, after I had formed half into knots already.) Because I didn't have to add a bunch more flour, my batch was a little smaller than the previous batch. I might try doubling this recipe sometime, especially for company. The batch made two cookie sheets worth -- about 2 1/2 dozen.
Here are the knots after I formed them: 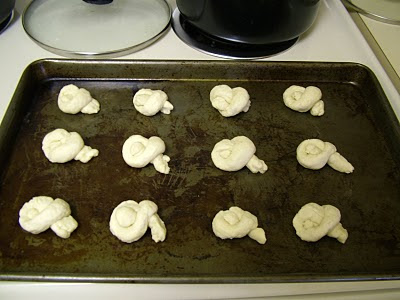 And here they are after 6 hours of rising: 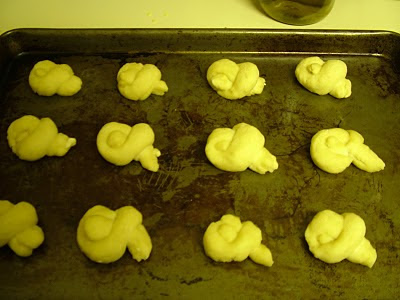 Do they look puffier to you? They did to me. Not doubled, but definitely puffier.
The proof, though, was in the eating. Were they too dense and chewy, or puffy and soft inside? 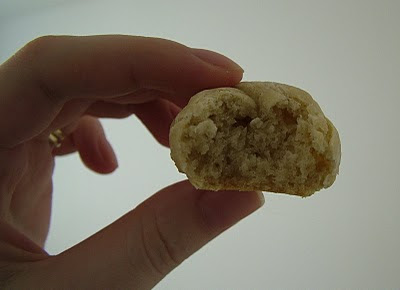 As you can see, they were much puffier. They are still a tad chewier and denser than regular garlic knots, but not to the point that they are any less enjoyable. They have a slight sour tang, but not overpowering. The outsides are chewy but not crunchy (a little longer in the oven, or a hotter temperature, might have yielded crunchier outsides if desired), and the insides are soft. A perfect knot; I wouldn't change a thing.
Next, I hope to try pretzels, but I'm a little worried. All the recipes I've found seem a little tricky and require boiling the pretzels. My goal is to make something like the Utz sourdough pretzel bites that John likes so much. They're small and crunchy -- I'm not looking to make a big Philadelphia soft pretzel, though I suspect that would be much easier to do at home. Any suggestions?
Oh, and one more picture, mainly just because it was beautiful: Thai iced tea. 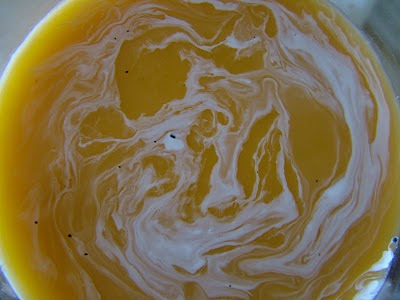 Thai tea is regular black tea that is specially flavored with herbs. I got a bag of it from my friend Sarah for my wedding shower, and I really like it. You boil the finely ground tea leaves for five minutes, making a very strong, blackish orange tea. It smells like a fine pipesmoke, almost -- a little bit vanilla-ish. Then you chill the tea and add coconut milk, whipped cream, or condensed milk. I didn't have any of those, so I used regular milk. The moment after you add the milk is so beautiful I just had to take some pictures. When you buy it in a restaurant (as I used to do, on trips to our local Thai restaurant with my mom), it's even prettier. I wonder if that's the real reason I like it?
Posted by Sheila at 9:02 AM