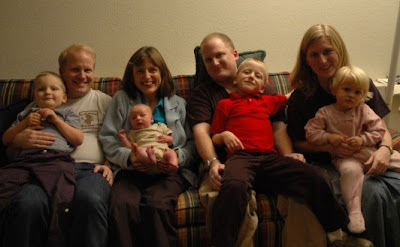 I've always wanted one.
Of course no one believes me on that count. They say, "Oh, sure, you think that now, but wait till you've had one." Drives me nuts! Can't someone know what they want? As shown above, I do have a few younger siblings to judge by. I like them, and I'm pretty good at dealing with them, too.
But now, I'm finally in a position to vindicate myself. I can say, "I was queasy for six weeks. Gagging all the time for six more weeks. In terrible hip pain for four months. Having contractions for three months. I experienced labor, which ended up being more painful than I could have imagined. I was so exhausted I couldn't remember what it felt like not to be tired. And yet, now that he's here, I still would like to go through that a dozen more times, just to get a dozen more of him."
Yes, I did say a dozen. I think a dozen is a great number. Though I'd be willing to have more. And if anyone asks me, "When are you ever going to stop?" I'll just tell them, "When I have one I don't love -- that is, never."
Still naive, coming from a mother of one? Well, maybe. But I'll put my money where my mouth is. I don't believe in birth control ... so the next baby is going to come whenever he or she is ready. Because who would not want another one of these? 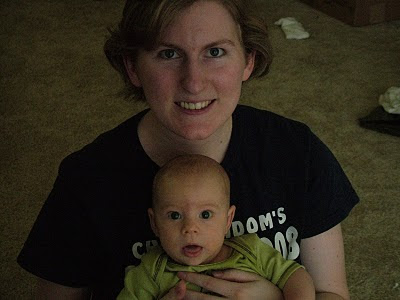 I love your conviction.
It's admirable.
I think aside from having love, one day putting money where one's mouth is might take a literal turn and whether you're able to financially support a larger family might enter the picture.
But in the meantime, every happy baby photo is a reminder why the word "lovely" and "love" in it. =)

Really, this child is the most expensive one I'll ever have -- reducing us from two incomes down to one. Subsequent kids won't cost much more -- our insurance covers any number, we use cloth diapers, and we don't have to pay for formula since we're nursing. Food will end up being our main expense, I think.

Not that any of my experiences are anything like childbirth, but I remember the first time someone who fancied himself more wordly wise put down one of my personal goals.

I was copying, by hand, G.K. Chesterton's Orthodoxy. (It seemed the only way I would ever get a copy without actually photocopying or scanning it!) I was midway through one of the early chapters when he heard what I was doing and said, "You're not going to make it."

Really miffed, I retorted that I would finish it--and that I'd dance with the completed manuscript under his window in the moonlight, when I was done.

And he just brushed it off, saying, "You only say that because you haven't been copying it long enough."

Well, there is another way to interpret his parting shot, for I didn't actually finish my job until after he had moved out of the hostel and I couldn't do that moonlight dancing thing even if I had still been up to it.

Anyway, yes, some people just don't get it, and for them it helps to have the vindication of the first book . . . or the first child. =)

May your family be as big as your heart!

Wow, copying the whole book! That takes commitment. But I'd agree that every word of that book was worth copying. :)

Your parting words are so very sweet.

When I was 12 I decided that I wanted 12 children. I got that exact same response of "Wait until you have one!"

Only two people ever decided to switch things up a bit. The first was a lovely mom in our homeschool group who had recently had her tenth child (at 47, after several miscarriages) and said, half-wistfully, "I always wanted twelve myself."

The other was this geeky boy I met at college who said, "Why stop at twelve?" I started dating him a few months later. :)

I don't have kids yet, but I have worked with the under-5 set pretty extensively, and I really do *like* it. It's hard, it's crazy, it's boring sometimes, but it makes me happy at a deeper level than just about anything else does. If being a big sister and a babysitter makes me feel that good, I figure motherhood is going to be pretty awesome.

It is awesome. Totally awesome. :)

Sheila, I'm coming from the 12-or-bust camp too ;) but I do have a thought for the money where one's mouth is column: it isn't the little nursers and poopers that are expensive. It is the little ballerinas and soccer players and pianists that are expensive. I mean, children's extracurricular activities are no reason to limit family size, but keep in mind that the dollars don't start breeding like rabbits until you kids hit about eight years old...

Fidelio, I suspect my kids won't be having as many ballet lessons as the other kids in the neighborhood. I always wanted to be in a dozen different things, but my mom wisely kept extracurriculars to one at a time. I spent my free time making things up and entertaining myself instead. I don't regret a moment of it. The only thing I really wished for was not to be so lonely ... and, God willing, my kids will never have to be lonely.

But yes, I know the kids will get more expensive as they grow older. Think of all the homeschool materials I'll have to buy! We'll just have to keep on being the frugal people we are. (Plus, John should have his masters by then, which should help everything.)

I love your attitude! We do NFP and are hoping for at least a half dozen, and we get pretty much the same responses. I think to most people, 6 or 8 or 12 or 20 are all the same-more than 2-3 and therefore crazy! Thanks to Hubby's job we should be plenty able to support as many as we are able to have, but #1 was a c-section (unfortunately my water broke but I never dilated or had strong contractions ever) so hopefully my body will cooperate with the plans in our hearts!