A whole year old, can you believe that?  Actually, a year and three days, by the time I have sufficiently recovered from that birthday to be able to write about it. 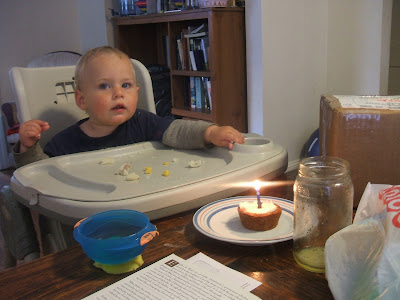 Birthdays are so stressful I am tempted to cancel them all and just inform the kids of their new age with no cake and no presents.  Cake makes them whiny.  Presents make them quarrel.  Little puzzle pieces and building blocks are scattered all over my house.  I know the boys are happy and well-loved, but YIKES!  Our house is something under 1,000 square feet and the toys are beginning to pile up.

But, at long last, I have found a home for most of the new stuff and the new stuff is getting boring enough that they no longer have to fight over it, so it looks like today might be a relatively okay day. 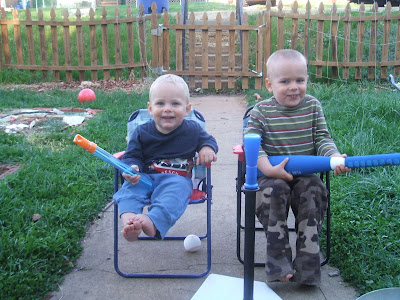 It's hard to think of what to say after a whole year.  I mean, there goes the babyhood of my second child!  Gone in a flash! 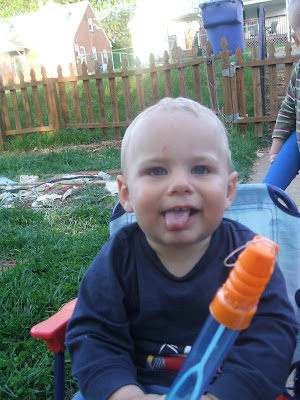 It's hard, him being the second.  I haven't had the time to spend on him that I did on Marko.  No long, peaceful afternoon naps with him on my chest.  No time spent while he was napping looking at pictures of him.  No eager awaiting of each new milestone.  It was more like, "What?  He's three months old?  What?  Six months?  How is he crawling?  When did he learn to do that?"

It's easy to be overshadowed by a personality as big as Marko's.  I do make sure to spend some just-Michael time, but it's usually right at bedtime, to say nothing of those lovely three-a.m. playtimes.  And while Marko is there, I make sure to actually interact with Michael too.  I just feel guilty that he will never ever get as much attention as Marko got.  Though perhaps that's a good thing. 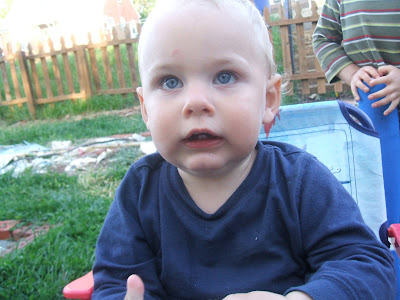 I just feel almost like he's a stranger.  I've only known him a year.  How am I supposed to know what he's like?  I can come up with pages of description of Marko, but with Michael it's hard to say what's his personality and what's a stage.

As a newborn, he was super clingy, much more than Marko.  He stayed latched on for pretty much the first three months, with pauses to upchuck everything again.  I could barely put him down.  And then around three months old he suddenly became a much "easier" baby.  Still nursing a lot, but willing to be down in between.

He's a bad sleeper like Marko is.  No, scratch that.  He's worse.  At a year old Marko mostly slept through the night.  Michael hasn't done it once.  But he goes back to sleep with relative ease, and it's nice to have him in bed for that.  He's more accepting of being touched and snuggled than his brother.

He's an achiever like Marko is.  Scratch that.  He's more so.  Crawling at, what, seven months?  Cruising a couple days later. Walking at ten months.

I thought it was my fault Marko startled at everything because our house was so quiet.  Nope.  Our house is always loud and Michael cries at a sneeze.  He's used to "usual" sounds (dog barking, Marko screaming) but they still wake him up.  And they both go bananas if I try to vacuum, so I don't even turn it on anymore.

Michael doesn't seem to mind strangers, but he doesn't smile at them much either.  Sometimes he does.  Usually he just keeps going, going, going as usual, exploring his environment.

He loves to be outside, to roll around on my bed, to grab the cat, and to climb on things.  The climbing is pretty constant.  If I look away for a minute, I come back to see him crawling on the table or sitting on my laptop.  There have been some heartstopping moments.  Luckily he is not much fazed by small bumps and bruises.

He's not really clingy anymore.  If he doesn't want to be up, he will fight you to get down.  He is on the go most of the time.  But there are still moments when he locks himself to me like a barnacle and puts his arms around my neck ... and as restrictive as that is, it's also really sweet because I know he won't want to do it forever. 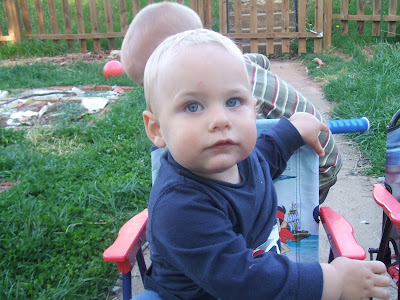 He looks different from Marko now, a little at least.  He has that little upturned upper lip that gives his mouth a different (adorable) shape.  His eyes are also a bit farther apart and a lighter blue-gray.

His hair is getting a little longer and curlier at the back.  I love the curls.  I always twist them a bit in the tub to make them curlier ... but then John smooths them out because he doesn't like curls.  Sigh.

Michael is about 30 pounds, but he's not hugely fat anymore.  He's leaned out a lot and is pretty tall.  He has a few makeshift words: ssss for nurse, wa for water, eeeech for eat, pa for up.  I think.  We have to guess a lot, but he definitely is saying something.

I guess I'm mostly just looking forward to seeing how he unfolds into his own unique self.  He seems, at this stage, to be a "charming chimp-child" in the words of Harvey Karp, but another year should show me a lot more of his personality.

Sheila, I'm with you in wondering where all that time went!

Happy birthday, Michael! I can't wait to meet you on Saturday. :)

Happy day to your baby boy! :)