What the heck?  Wasn't he just two?

Only if I look back at old pictures, I know it's been awhile.  This is what he looked like when he was two: 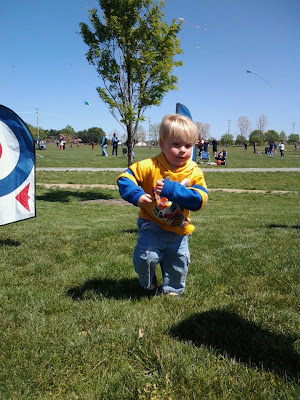 Gulp.  I thought he was sooo big.  Now those clothes don't fit him.

He was scared of his birthday candles.  Awww. 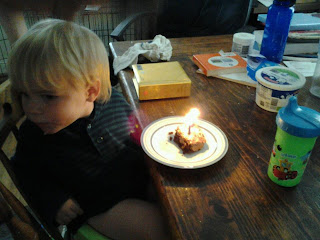 That sweet long hair!  I had to buzz it yet again today because the bald spots were so bad.  I can't remember if I've mentioned that he pulls it out.  He does it as he's falling asleep or when he's reading a book.  That's what I get for thinking I'd finally broken him of the habit of pulling hair!  He just stopped pulling mine and moved on to his. Hence the Marine haircut.  It makes me so sad.

If that's bad, look at this.  This is him two years ago, on his first birthday: 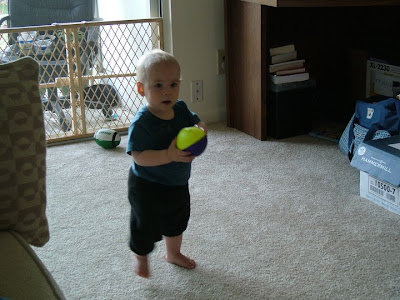 Whoa.  Michael is bigger than that.

And there's his first-ever bite of cake.  He ate the frosting off, but detected the stealth nutritional value in my low-sugar, gluten-free cake.  This year I am not making that mistake.  Chocolate cupcakes all the way.  He helped me make them and licked the whisk. 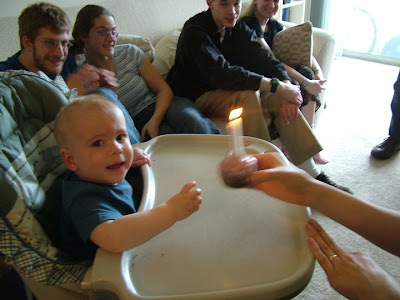 How do I have a kid old enough to help me bake?  Aren't I, like, in high school still?  No? 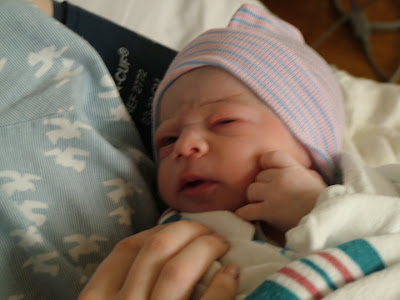 I can't really remember, though, what it was like not to have him around.  I know that there must have been a time with no Marko.  But how boring my life must have been!  How lonely!  What long naps I took ... and baths ... and days on the couch doing nothing but reading ... well, it wasn't all bad.  But it's better now.  I'm so glad to have this kid in my life.  He's three.  And three is an awesome age.  Every year he blossoms a little more, shows us a bit more of who he really is.

He's a fun guy.  He's adventurous and always got something going on upstairs.  He's a worrier.  He's a little nervous around strangers, but he warms up after a bit.  He loves Daddy and the dog and playing outside.  He hates being micromanaged.  He likes to do things all by himself -- except when he's feeling little and just wants to be fed, dressed, and carried.  He's got a lot to say.

His favorite thing in the world is having something useful or helpful to do.  He might drag his feet on using the potty or going to bed, but ask him for help sorting silverware or emptying the dryer and he announces, "I will!  I will!" and runs to do it.  He can be two hands full when we take him out to the store, but tell him what to put in the cart and he rises to the occasion.

When he plays with another kid, he is okay with being led around by the hand and dragged into games.  But within an hour or two, he starts to pull back and want to play by himself ... and if he doesn't get that, he falls apart.  He can be bossy sometimes with us, but with other kids he is the follower as often as not.  He freaks out if things are too different, if people sit in the wrong chairs or wear the wrong clothes or do things in the wrong order.  It makes him happy to do things the same way every time.

Sometimes I wish I could turn the clock back and have him be my baby again.  I can't imagine I really was enjoying him enough then.  Sure, there were hours and hours I spent with him just asleep on my chest, watching him doze and smelling his head ... but I feel like I must have missed some, have not been paying full attention, because if I had been, it couldn't possibly have passed by so fast.

And yet I don't want to go back.  Because Marko is fully himself now too, and just as much a delight as ever.  I don't want him to grow any bigger because he is perfect now.  Still, the thought of him continuing to unfold and learn and grow is so exciting to me.  I can barely wait to see what he'll do next.

So for now, I will enjoy three-year-old Marko.  He's a ton of fun, and I want to enjoy every minute.  Three years has taught me one thing, at least -- it won't last.
Posted by Sheila at 4:28 PM