Apparently garlic knots must be a Philly thing, because a lot of people I've talked to don't seem to be familiar with them. What they are is a bit of bread in a knot shape, covered in garlic and salt. I've made them before, using a regular pizza dough recipe, and they were delicious. I tried them this time with a sourdough recipe, both to save money and for the health benefits. I used these two recipes, which were quite similar: this one and this one.

First, the starter. I made my starter with plain flour and water in equal amounts. I fed it each day between 1/2 and 1/4 cup of each. I used filtered water, because I am not sure if our water has chlorine. That can kill your starter, and I didn't want to risk it. After a week, it looked like this: 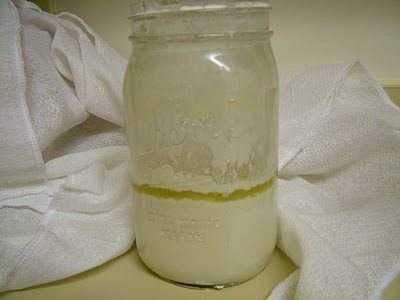 This is soon after a feed. The top was bubbly and it smelled sour. (Sour enough that John asked, "What is that? Can I throw it away?" In the background you can see the cloth I use to cover the jar -- it's actually a flat-fold diaper. Since I use prefolds, those flat fold diapers have been doing all kinds of useful work for me -- they're a lot like cheesecloth, which is what was recommended.

I mixed together 1 1/2 cup starter, 1 1/2 cup flour, and 2 tablespoons olive oil, as recommended. The recipe said I might need to add water to get a "soft dough." But my dough looked like this: 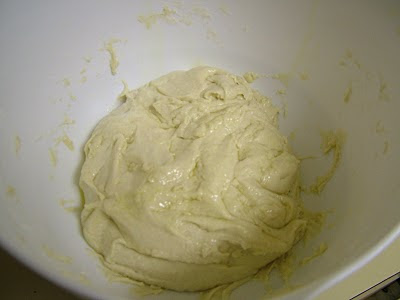 It was not forming a ball, and it was not even reasonable to expect me to knead it. I kept adding more flour in little sprinkles as I stirred it with a wooden spoon, but if I'd had half a brain I probably would have just dumped in another half cup at least. It definitely needed it. Later I realized that the writer of the recipe dumps out the separated liquid at the top of her starter, though she says you don't have to do that. (Next time I will -- it made for a very sour taste, more than I wanted.) Obviously I had more liquid than she did, so I should have added more flour.

Here my two recipes conflicted. One wanted me to form the dough first and then let it rise, and the other said to rise first, and then form. Seeing as I wanted a rather complicated shape which would need some handling, rather than a flat crust, I should have formed first and then done the rise ... but of course I didn't. Mistake #2. I let it rise for about five hours before forming the knots. The last batch got a little more of a rise, because I left them for awhile after shaping and before baking, and they were better than the rest. Next time I am certainly shaping them first!

Once the dough had risen, I got ready to shape the knots. The dough had not come close to doubling in size. I suspect my starter wasn't really ready. Maybe I should have let it rise longer, too. After all, sourdough needs to rise much longer than yeast dough.

As I tried to shape the knots, I discovered that the dough was much too wet to shape into anything. I had read that sourdough turns out better when it's wetter, but this was just ridiculous. My second batch didn't get shaped at all -- I just did blobs like drop cookies. My third batch, I added a lot more flour, and these were the ones that turned out the best.

This is the shape you're going for: 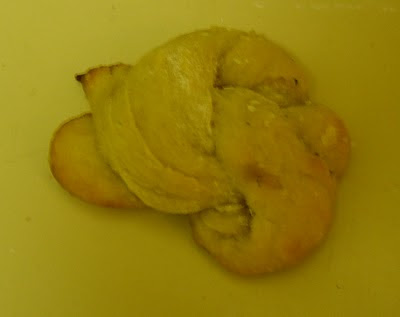 Just stretch out a rope of dough and tie it (as best you can) into a knot. The first time I made these, I was rolling out a little "dough snake," but really, dough is stretchable, so you can just take a little blob and stretch it out. Remember that the finished product will be bigger than what you're shaping -- so think small.

The first batch got baked for 15 minutes at 450 degrees. Then the fire alarm went off and John came over to wave a towel at it. The second time he had to do it, he asked me to please stop whatever I was doing. So the next batch was baked at 350, but for much too long, and they were pretty well ruined. They were like little rocks. The third batch got 350 degrees for 15 minutes and were the best off. So that is the time and temperature I recommend.

The insides of the first batch, I thought at first weren't done, because they were so dense. I thought that was doughiness -- but it was really just failure-to-rise. 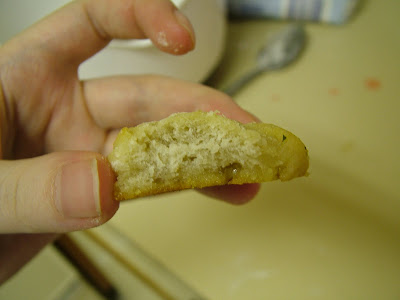 They tasted good though!

Last step: put knots in a bowl with a drizzle of olive oil and garlic salt (or chopped garlic and coarse salt). Toss them around to coat. 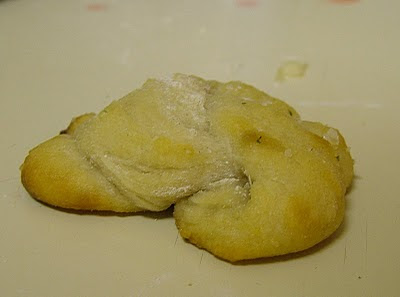 Then I ate them all! Well, several of them anyway.
Mine were kind of a failure, due to several different mistakes. But the last batch turned out a little better, thanks to the longer rise, so I feel like the recipe could succeed, if only I'd done it right. John took one bite and handed the rest back. It was too sour for him, I think. But I did enjoy them ... in fact I ate little else for dinner.

Here are the directions I would recommend following.
Start the recipe in the morning, to have with dinner.
1 1/2 cups sourdough starter
2 tablespoons olive oil
1 cup flour, and then keep adding flour until you get a dough you can knead
Knead for five minutes, until the dough is no longer sticky. Form into a knot shape -- you will need 2-3 cookie sheets to place them on. My trick, since I only have 2 cookie sheets, is to form one batch on each cookie sheet, and then a third on my Silpat (silicone mat). When the first batch is done and cooled, I take the knots off that sheet and move the Silpat onto it to bake the last batch.
Cover with plastic wrap and leave in a warm place for 5-7 hours, until the knots look much bigger and puffier. I don't know if you can expect them to double completely.

Bake at 350 degrees for 15 minutes, or until light brown.
Cool enough to handle, then roll in olive oil and garlic salt (or crushed garlic and coarse salt). They're best while they're still warm.
Enjoy!
N.B. Here is my second try at the garlic knots -- much improved!
Posted by Sheila at 12:00 PM

Garlic knots are a staple of NY pizzerias, too. Ah, I grew up loving them; they're great things to fill you up when you aren't up for buying lots of slices and you want finger food. =) It's a challenge to find ones without a crunchy outside, though.
Yours look delicious. Never thought of using sourdough before.

Warning: they do taste a bit different. Not too crunchy, though, in my opinion (except for the overcooked batch).