How my life has changed

I have been the mother of a newborn for 4 weeks, and already it's hard to remember what it was like before. It's almost hard to believe that there was a before -- that my little boy wasn't always here. It reminds me a lot of getting married: beforehand a lot of wondering, "What will it be like?" Then the next thing I know, I'm thinking, "Wasn't it always this way?" So it's hard to compare the before and after. Still, I'm going to try.
Before I had the baby, I had a really, really hard time getting up at 6:30. I generally hit snooze for at least 15 minutes before hoisting myself out of bed. Now, I count myself lucky when I wake up at six ... because it means I wasn't already awake. Once I find myself awake at six, I don't usually bother trying to get the baby to sleep any longer. He's harder to push snooze on than an alarm clock, and besides, six a.m. is daytime! I don't think I've slept later than six since he was born ... though I will admit to midmorning naps.
Before I had the baby, I didn't particularly want to get out of the house, and I certainly didn't want to do housework. Now, both of those things sound like special treats -- probably because it is such a challenge to find time to do them. I'm overdosed on sitting on the couch, watching movies while I cuddle the baby, and underdosed on dishes. (I will admit, though, that I still prefer blogging to dishes ... hence this post.)
Before I had the baby, I don't think I had this much energy. I'm tired, sure, but I feel much more ready to jump up at a moment's notice and go do something. Turns out sleep deprivation wears me out much less than pregnancy did.
Before I had the baby, I was as big as a house. Now I've lost all but the last 10 pounds (as of a week ago) and I fit into my old jeans. I didn't think this would be so important to me ... but for some reason it is. Partly I'm just sick to death of those old yoga pants -- but part of me is thrilled to be "skinny" again. I like the way I feel, and I like not dealing with the inconvenience of being huge.
Before I had the baby, I thought it would be more complicated. Not more difficult -- because it is difficult. But it is not complicated to take care of a baby. Really, he just needs to be fed. Occasionally he needs to be changed. Sometimes he can't sleep and needs to be rocked. And that's about it! At this age, it really isn't rocket science to care for a baby ... it just takes patience.
Before I had the baby, procrastinating meant surfing the internet for 2 hours on a Saturday instead of getting chores done. Now, procrastinating means not going to the bathroom the instant I have a chance, because that chance will be gone soon and I might not get another one for hours.
Before I had the baby, I took food, water, and sleep way too much for granted. I could have any of these whenever I wanted. In fact I took a lot of things for granted. It was nothing to me to get in the car and go somewhere -- in fact I hated doing it most of the time -- and now it's an exciting trip when I manage to pack myself and the baby up.
There are a lot of downsides to being a mother, I have to admit. Last night John texted me to tell me he couldn't call because he was going out to Theology on Tap with two friends. I felt so jealous I cried. You know, if I hadn't had the baby, I might not have wanted to go? But since I couldn't go, and hadn't been anywhere for fun in so long, I wanted to badly. (By the way, lest you should feel indignant, John did call after all. Lucky for him ... he would have come home to quite a minefield if he hadn't, I'm afraid.)
There are a lot of little things that it's hard to go without. Being able to go to bed, reliably, at the same hour every night, and not get up once until morning. (Couldn't do it when I was pregnant, either -- I always had to go to the bathroom.) Getting to go out alone with my husband at our whim -- just "hey, let's go see a movie" and we could be off! The worst of it is that we weren't able to take advantage of this before, because of our opposite schedules. Almost all of our married life we have been terribly busy and stressed out, and now things are better but we can't take advantage of it!
Part of me really wishes we hadn't had this baby so soon -- that we could have waited awhile to enjoy each other's company and get our feet under us a little more. But, for one thing, I don't believe in waiting -- I believe marriage is for children, not just for me to enjoy -- and for another, well, look at this: 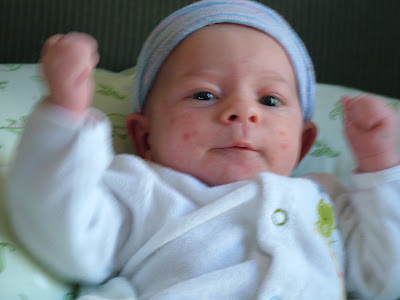 How could I regret anything? I can't honestly wish for a single day more without him ... because I already love him so much, a day without him would be terrible. Sure, I long for some time alone, without all this responsibility, but you know the second I walk out the door without him the first time, I'll miss him awfully. He's a wonderful little guy and I wouldn't trade him for anything. Not for all the fun times and movie nights in the world. Not even for an extra bathroom break.