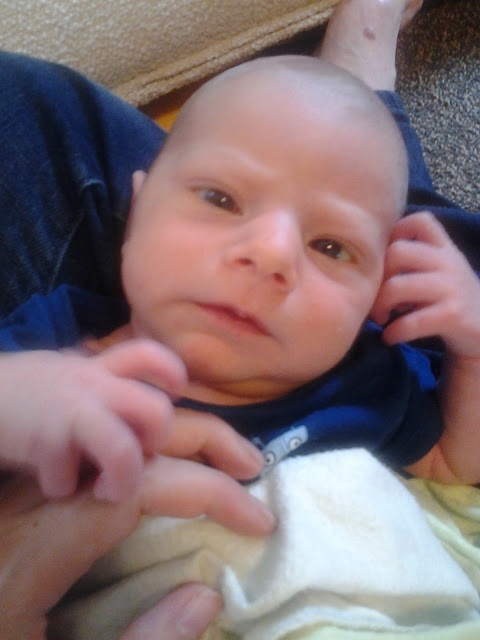 I have been badly wanting to record a bit of what's been going on here, because I'm afraid I'll forget.  Meanwhile, I am way too busy living my life to write down much of it!  I've kept up on reading blogs, because you can do that one-handed, but not on writing.

Michael is continuing to need pretty much constant holding, though he is slowly getting used to being put down for half an hour or 45 minutes at a time, a couple of times a day, for a nap.  Or maybe ten minutes in his bouncer while I hastily scramble up some eggs so the rest of us can eat.  All the rest of the time, he is in physical contact with somebody.  Usually that somebody is me.  And usually he is latched on.

I'll be honest, it's exhausting.  Marko was never this needy.  I love that he is actually doing what's good for him and eating a lot -- he has gained almost a pound THIS WEEK -- but I was crying to John last night, "All I want is for nobody to be touching me for ONE HOUR!"  I can handle one baby in arms pretty well, but when it's one baby latched on and one toddler climbing up my back and pulling my hair ... well, I'm discovering my love of physical touch has limits.

I've lost patience with Marko for things that never would have bothered me before, just because I feel overwhelmed.  I've yelled at him for peeing on the floor and said in exasperation, "I do not WANT to play the indecisive game, I want you to decide whether or not you want the turkey and then just EAT IT OR NOT!"  I feel bad about this.  On the other hand, he hasn't really seemed too fazed.

The first week, John took off work (unpaid, which means this will be a very tight month) and pretty much did my job for a week.  He took care of Marko almost exclusively, and all the cooking and housework, while I napped with the baby.  That was awesome.  I felt relaxed and happy about having two kids.  Marko, also, wasn't the least bit shook up about the new baby, because he wasn't affected.  He still had one parent's full attention.  (In fact, sometimes I wondered if he noticed.  He really wasn't interested in Michael at first, and seemed intimidated when we offered to let him hold his baby brother.  Lately he at least likes to watch me change diapers and tentatively pat the baby's head.  But that's it.)  John was the only one who didn't have an easy time that week.  He was so happy to get back to work where "at least I know what I'm doing!"  I don't think he will ever underestimate what I do again (not that he's been in the habit of doing so before, but I suspect he didn't really know quite how difficult it was).

By the end of the week, I was chomping at the bit anyway.  I felt so much better that I couldn't stand to sit around anymore, and I also missed Marko.  I wanted to be more involved with him.  But I was terrified of handling two kids at once.

The first day actually was a pleasant surprise.  I found a lot of games I can play with Marko while nursing, and he didn't really care that my lap was occupied so long as he had my attention.  There were moments when I had to tell him to wait for a sandwich and he screamed bloody murder, but I stayed calm (mostly) and he got over it.  The only hard part was making do without a nap.  I seriously could have used one, because nighttimes with Michael are still exhausting.

We're on day 3 of solo parenting two kids, and really, it's not so bad.  I'm still not cooking dinner.  I washed a few dishes today, but in the main I'm not doing chores either.  I'm hoping to get back into that slowly, as Michael gets better about being put down or riding in the sling.  (The sling has definitely been useful, but since he always wants to be nursing and I can't nurse easily in a sling, it isn't as useful as I had hoped -- yet anyway.)  I'm trying to find a bedtime method for Marko that I can do while holding a baby, because John has a trip out of town in a few weeks and I'm going to need that.  For now, John holds the baby (who sucks his finger like crazy and gets very impatient for me) while I put Marko to bed.  And then comes the rough time for me ... at least emotionally.  I am used to relaxing and unwinding a bit after Marko's in bed. I  blog.  I eat ice cream.  I get any last things done that I wasn't able to do during the day.  And then I have a relaxing bedtime routine for myself.  All that has gone by the wayside, because Michael canNOT be put down between 8 pm and bedtime.  He wants to go to bed WITH me, when I go.  So I've had to cut out all of my "me time" and just nurse and nurse and nurse nonstop until I give up on anything else happening for the rest of the evening, and I settle into bed with Michael.  Perhaps I should make that my "book reading time" or something.  And I'm learning to get completely ready for bed as soon as dinner is over, or I won't get a chance.

At the moment, Michael is down (hallelujah!) and Marko is playing independently as happy as a clam (more hallelujahs!) and I am finally blogging, which makes me oh so happy.  I even pulled some weeds today, with the baby in a sling.  I know it will take time to find a new normal, but we're getting there.

I found I can nurse hands free pretty well in a moby wrap - got any 5 yard lengths of fabric lying around?

glad for you! transition is transition, sounds like it's all going well!

I have a Moby wrap which I love, but can't for the life of me figure out how to nurse in one. I end up having to take the whole thing off! Got any tips?

I totally agree that the hardest part of having two is giving up that after Luthien goes to bed free time. Now I put her to bed and Judah is at his most needy time. It is the most emotionally exhausting part of the day. But now at about four months Judah is starting to go to bed at around 8. He usually gets up again at 10, but having that little break (sometimes) the last few weeks has been huge for me!

I very much related to this post. :) I have a difficult time immediately postpartum with having zero "me" time. Just keep telling yourself that this is just temporary - he's going to get bigger and develop a bedtime, and you'll get that time back to unwind. Hang in there girl!