How I weaned Marko with no tears 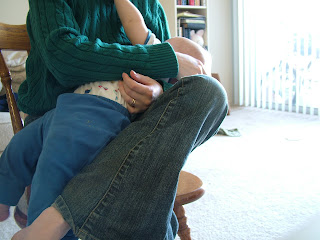 I was so excited to hear about the upcoming Carnival of Weaning, where I would be able to write a post about our weaning experience.  Only the deadline was in May, which made me worry I wouldn't have time to write a post with all this baby stuff.  Definitely should have written it in April!  By the time I had my head up and began to look around me, the deadline had passed.  But I decided to write my post anyway.  You can find the other posts linked here.

A lot of natural mamas let their children self-wean at their own pace.  Some even try to encourage a longer span of nursing.  But that doesn't mean there is no gentle way to wean, or that there is anything wrong with recognizing that we've had enough.  The goal is to respect everyone's needs -- our own included.

It is true that the "natural age of weaning," if we draw a parallel between ourselves and other animals, is between two and seven.  But it's also true that not all animals allow their young to self-wean.  Some will start kicking their young away when they attempt to nurse, either at a certain age or when they become pregnant again.  It seems to me that when mothers feel pain or extreme aversions when nursing, that might be nature's way of saying, "You've nursed long enough.  Your body is ready to be done."  You don't have to quit when you feel these feelings -- but you can.

At the same time, you have to respect your nursling's needs.  If he's relied on nursing from birth both for nutrition and comfort, it would be very hard for him to give it up all at once.  He needs to be taught new ways to meet his needs.  And depending on his age and readiness, he may need a gentle nudge away from nursing or a long, difficult scaling-back.

Marko was pretty much ready.  He was never that into nursing for comfort, and ate lots of solid food.  When I got pregnant, he was 16 months old and nursing several times a day.  He nursed before nap and a few other fairly predictable times during the day, as well as whenever he got hurt.  He didn't nurse before bed -- we would take a stroller walk and he'd fall asleep that way.

As soon as I got pregnant, nursing started to hurt A LOT.  Marko never had a great latch, but it didn't usually hurt.  But the hormones of pregnancy made nursing extremely painful.  I would grit my teeth through the whole thing.  And it got worse week by week.  At the same time, I wasn't gaining any weight, which might or might not have been due to nursing.  My general feeling is that the pain was my body's way of telling me I couldn't handle nursing while pregnant.

I had several different tactics to distract him from nursing.  Nursing fulfills many needs, so I tried to guess what he might need, and fill that need with an alternative.  His main needs he was using nursing to cure were nutrition, comfort, attention, and sleep.  So for each of these, I had a different alternative.

If he seemed to be hungry or thirsty, I would give a snack or a sippy cup of milk.  Usually I tried this option first if I wasn't sure.

If he seemed upset or if he'd gotten hurt, I picked him up with his head on my shoulder and rocked him while he played with my hair.  Most babies have some kind of fidget that goes along with nursing, and that was ours.  Even now, he seems to associate my hair with the same sort of comfort and closeness he got from nursing.  I find it kind of annoying when he messes with it, but I decided that it was an alternative that I could live with.  Now, at two, he only does it when he's upset or tired, and he knows not to pull.

If he seemed bored and craving attention, I would suggest a book or going outside.  Marko LOVES both of these, so he often would give up the idea of nursing and rush to the couch or the front door.  A few really busy days in a row did a lot to break the routine of asking to nurse when he was bored.

For sleep, we had to construct a whole new routine.  We already put him to bed with a stroller walk much of the time, but the trouble with that is that it's dependent on the weather.  Our backup, which was John pacing the floor with him and singing, was exhausting for John and impossible for me when John was out (because of my back problems).  I needed something new.  I decided on rocking and singing in the rocking chair.  So every night, I would rock and sing for awhile, and when he inevitably asked to nurse, I would.  I rocked first and then nursed in the rocking chair for maybe five minutes.  If he wasn't asleep after that, I went back to rocking and then another nursing session at the end.  It helped to keep a very careful eye on the clock so I didn't take him into the bedroom before he was really tired.  Later on I added a bedtime story to the mix, which we read on the couch before going into the bedroom.  That helped get him very close to sleep before we went into the bedroom.

This was the longest stage of weaning.  I would put him off nursing at any other time -- first offering distractions, then only nursing in the rocking chair, and eventually telling him, "We only nurse at naptime and bedtime."  I never said no outright.  If he was insistent on nursing, I would take him into the bedroom and begin our nap routine.  If he wasn't really tired, he usually got antsy by the time I'd finished his diaper change, and would get up and run back out of the bedroom.  Occasionally he'd stick around just to get his nursing.  And sometimes we just had a really early nap or bedtime!

For awhile there I thought he'd never figure out how to go to sleep without nursing.  He'd stay awake through the song every time.  I weaned him off the left breast almost as soon as I got pregnant, because it was the more painful side, so I would hold him in a nursing position on the left while he fidgeted with my hair.  It was almost like nursing.  But eventually he would wriggle around to get on the right and nurse to sleep -- sometimes for only two minutes.  I've always unlatched him as soon as he began to drift off, so it seemed to me it should be easy to skip those two minutes, but it wasn't.  In the middle of the night, somehow, I found it easier.  I phased out night nursing probably a month before daytime nursing.

Many nights John did the bedtime routine, and he would do exactly what I did, but without the nursing.  Usually, however, he had to get up and walk around to "seal the deal."  He just wouldn't nod off without vigorous movement or nursing.  Then one day, when John was gone, he fell asleep with no nursing at naptime.  The next day he nursed at naptime, but not at bedtime.  And the day after that, he didn't nurse at either one.  We nursed one more time a week later, when I was desperate to get him to nap, and not again.  He was weaned!

Sadly, I couldn't consistently get him to nap after that, though.  He would hold out for another few hours, by which point it was too close to bedtime.  But he added that sleep into his nighttime sleep, and it ended up being for the best -- he'd been staying up till 10 pm before that.

Now, about nine months later, I have no regrets about how it went.  Marko adjusted very well, and didn't have any major crisis about being weaned.  I'm not sure he noticed!  I think one time he asked for "neenee" out of the blue after that last time, and I just laughed and said, "Oh, you don't neenee anymore!" and suggested some other activity.  He didn't bat an eye, and he didn't ask again afterward.  I do have to say that there were times, especially during that scary 18-24 month stage which was so full of tantrums, that I thought, "This would sure be easier to deal with if I could just nurse him!"  But we were able to find other ways to calm him down, meet his needs, and keep him close.  Weaning did not remove any needs: he still wakes at night, for instance.  (Some people nightwean in the hopes of getting a full night's sleep, and I always warn them that it may just take away the easy way of getting the child back to sleep!)  So it's been more difficult for me in many ways, finding new ways to meet his needs -- ways which generally involve getting off my butt and off the computer, sigh.  But because I was so desperate to be done, I didn't mind the extra work.  I'd been feeling very frustrated and resentful every time we nursed because of the pain, and also afraid of nursing two, which I wasn't at all eager to do.  So it was a pretty much unmitigated relief when he stopped nursing for good.  An added bonus was that he started snuggling with me, just for the snuggling, which meant a lot to me.

If you're interested in reading more about weaning -- how others have done it, how some decided to do it, and why others decided not to do it yet -- check out the carnival links at the bottom of this post.
Posted by Sheila at 5:50 PM