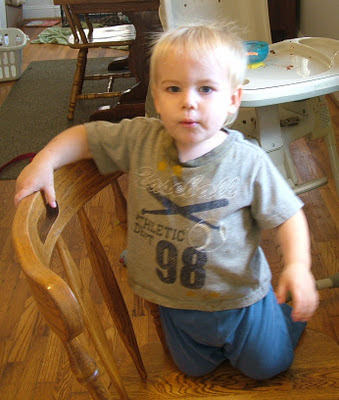 I was not thinking, "Aw, this could be the last time. I had better savor the moment." I was thinking, as I do every time, "Ow ow ow, please God, let him never do this again." So I haven't been feeling any regret or nostalgia. Instead I'm really enjoying snuggling with no nursing, and often no kicking or hair-pulling either! It's just been a really bumpy road, so that my feelings are of relief rather than regret.

It's been a slow process, which has been going on for a long time. Since he was a year old, I stopped offering very often. I would nurse him when he asked and at naptime. A month or two later, I started giving him cow's milk in a cup, because he seemed unsatisfied with nursing and wasn't nursing enough to get all I felt he should. A month or two after that, I started offering milk in a cup sometimes when he asked to nurse ... and three out of four times, he'd pick the cup.

For awhile we weren't nursing to sleep at night, and once I got pregnant we rarely were at naptime either. So he went down to an average of twice a day, and then an average of once a day -- twice some days, none some days. If he persistently asked to nurse and wouldn't be distracted, I nursed him. Or if he cried and couldn't be easily comforted otherwise, I nursed him.

Night-weaning him was relatively easy because he was sleeping through the night for awhile there. When he started waking again, he had no particular expectations, and didn't mind a spell in the rocking chair or me lying beside him in bed instead of nursing. On some nights I got frustrated and nursed him, but by the time I was about two months pregnant, he was basically night-weaned.

Then, when we stopped stroller-walking to sleep and started nursing to sleep, I decided sleep time was the only nursing time. So that was when the real work of weaning happened -- I no longer nursed him on request. Mostly it was pretty easy because he wasn't nursing much anyway and I was nursing him twice a day without him having to ask. But sometimes he did ask. I would generally not say no. No is an ultimatum, and it's like waving a red flag in front of my toddler. Instead I'd say, "Oh, is this naptime then? We only nurse at naptime. Let me change your diaper and get you ready for nap. Then we'll go in the dark bedroom and nurse in the rocking chair." That apparently sounded like too much of a production for him, because he'd usually change his mind. Sometimes he'd go along with it, only to get distracted by the change of room or the new diaper.

One hard-and-fast rule I had at this time was never to nurse anywhere but in the rocking chair in his room. I had heard that kids are often reminded of nursing by mom sitting in a place where she usually nurses, and I didn't want to give up the couch or the office chair. I would happily snuggle and read with him on the couch, but if he asked to nurse, we had to move into the bedroom. Not only did that discourage him from following through on his request, he started asking less because there was nothing to remind him of nursing.

The big challenge was getting him to sleep without nursing, especially because John's help isn't always available. He is there for bedtimes, but two nights a week he has class, and he's only there for naptime on weekends. I think that one was just a matter of being ready to go to sleep without nursing. Going to sleep with Daddy whenever available was a big help, but for a long time, if I was there, he'd want to nurse. This was made worse by my sitting in the rocking chair -- John would stand up and bounce him, but my back is no longer up to that because of my PGP. So I would sit in the rocking chair while we sang songs and snuggled, but when he wanted to go to sleep, he'd ask to nurse.

I weaned him off the left side when I was about two months pregnant because the pain was so bad on that side. It turned out to be a really good idea -- because I could hold him with his head on that side, and nursing wouldn't even occur to him unless he switched his head over to the right side. All the same, he just wouldn't settle down to sleep without nursing, so I was in the frustrating position of offering nursing to a child I really wanted to wean, just to get him to sleep. Our sleep problems were just a bigger issue than nursing was.

Every once in a blue moon, I'd get him to sleep without nursing. I did on Sunday, for nap. John went into the shower right when Marko decided he wanted to sleep, because he was going to have to leave right after that. Marko melted down in a big way. He just couldn't be consoled. I brought him into the bedroom and just rocked him and rocked him while he sobbed and screamed for Daddy. (Which, of course, broke my heart -- even though I knew most of his upset was because he was tired rather than because he would have actually been comforted by Daddy.) After what seemed like forever, he settled into my shoulder, stopped crying, and fell asleep.

Sunday night, John was gone again and I couldn't repeat the performance, so I nursed him. But on Monday, he again didn't get even a little sleepy until he suddenly had a huge meltdown -- this time two hours past his usual naptime. I took him into the bedroom, and he started crying for Daddy again. I offered to nurse him, and he refused. I offered to sing a song about Daddy, which he accepted. I sang "Bye Baby Bunting" probably a hundred times, never changing a word or a pitch. His eyes just zoned out and then fell shut.

So, it's circumstances as much as anything else that have helped us here. Each time he's either been really sleepy and ready to go down, or else John's been there to help. But we now know it's possible. And John will be here every sleep-time till Monday, so we can solidify the whole no-nursing thing. By that time it will have been a week. And, though I'm sure we'll hit some bumps, I'm to the point where I'd rather see him skip a nap than nurse him again.

So maybe it's not Marko's readiness. Maybe it's mine. I've been continuing nursing him up to now because it was easier to nurse than to consider alternatives. Now, I've decided I'd rather try all the other possibilities rather than nurse. Marko himself doesn't care -- attention is attention, food is food, sleep is sleep, and he doesn't really care the form it comes in. So when he occasionally asks to nurse, I pick him up, read him a book, sing him a song, get him a cup of milk, and he's perfectly content.

I think I will mark this down as a win: weaned (I think), with no crying, no pacifier, no thumbsucking, and no other issues. In the end, it turned out not to be a huge deal. It is so reassuring to me to know that there is such a thing as gentle parent-led weaning. It didn't have to involve cold-turkey and screaming. We just both adjusted, bit by bit, until whether we nursed or not didn't really matter, and then we stopped.

I'm happy about it. We had a good run -- almost 20 months -- despite so many difficulties throughout. I believe I've given him what he needed. I would be quite willing to nurse the next baby longer, if I didn't get pregnant (I'm thinking nursing through pregnancy is just not something I can do ... though you never know if it might be different next time) and they wanted to. But for Marko, I think this was the right amount of time. I'm glad I nursed him this long, and I'm glad I'm not nursing him any more.
Posted by Sheila at 7:28 AM

He looks like quite the little man. Hopefully the days of hair-pulling are over?? o_o

Yay! I think I am on the verge pf weaning son 3 and can relate to your joy! It's been awhile since I checked in, so congrats on the happy news too! : )