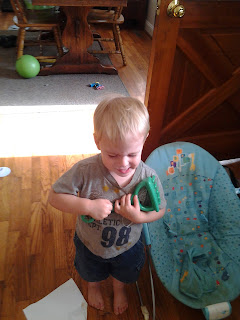 Marko's ability to pretend has taken a big jump lately.  A few examples:

The other day, he wanted very badly to "go somewhere."  When I said no, he just picked up my diaper bag, zipped it up, and walked off through the house calling "See you later!"

He got a hold of my breast pump the other day and tried pretending it was: a trumpet, a fire hose, and a flashlight.  Not, surprisingly, a gun.  But then I don't think he's ever seen a gun.

Today he "went shopping" by roaming through the house putting random objects in his "cart" (a box).  Two lids kept getting taken out and made into a peanut butter sandwich.

Last night he sat in the middle of the sidewalk with a long stick, dangling it into the grass.  He said he was "fishing for Doubt-Trout in Roover River" (name that reference!).

And his favorite thing for me to do lately is to make his stuffed animals talk to each other, kiss each other, hug each other, or dance.  He is WAY into that.

Let me tell you, it's nice when my hands are full to be able to participate in what he's doing just by talking with him, rather than getting down on the floor or letting him up on my lap!
Posted by Sheila at 4:56 PM

This post made me grin! =) What children can do with their imaginations is so delightful!

Such practice comes in handy when one wants to write lengthy stories... or huge computer systems. I am especially pleased to hear how he "breathed life" into his imaginary characters, and they got up and danced. (Speech comes at Pentecost, you know.)

I'm especially impressed he "got lost"; it's a tricky place, one's imagination, sometimes. I get lost in mine often, but it usually isn't pretend, even if it's not between school and home.