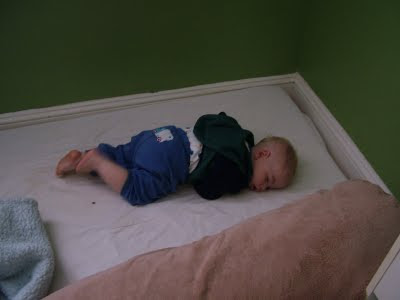 I think sleep is probably the #1 thing parents obsess about when their children are small. Followed by eating, and then probably pooping. You know -- the essentials.

Marko has been sleeping so well lately that I'm incredibly proud of myself! Though I think the things I've done are only a small part of the reason, and his readiness is the main reason.

The thing you have to understand is that he has always woken up in the middle of every nap. As a newborn, he used to cry every 45 minutes while he was sleeping. I would peek into the room, but he would just squirm a little and resettle, every time. It was just the way he would pass from one sleep cycle to the next.

At night, he never did that so much. You may remember that from 8-12 weeks old he often slept through the night! But then something happened ... I think mainly our trip to visit my family, as well as him not gaining weight as well ... and the next thing you know, he was waking up 1-3 times a night. For almost a year.

We coslept for awhile, particularly in the cold months. That was one way to keep him asleep for a whole nap. But I, as an adult, didn't really want to sleep as much as my baby did, so it led to a lot of awake time stuck in bed. I hoped, though, to train him to sleep more soundly by sleeping with him, and then transition to letting him sleep alone once he'd gotten the hang of sleeping through a whole nap.

Moving helped a lot. First off, his room is pretty quiet and we don't have to be in and out of there when he's sleeping. Second off, it's dark -- we bought a blackout curtain so it's very dim, even in the daytime. For the last few weeks, he's been having a "real" nap more and more often -- that is, he sleeps two or three hours at once, then toddles out of his room happy as a clam! You can't imagine how happy this makes me. I can take a nap, take a shower, or mow the lawn without being terrified he'll wake up halfway through and need to be put back to sleep.

Sometimes he does wake up and make some fussy noises. But I've learned to delay going in by half a minute or so. Usually he resettles himself without trouble. The funny thing is that these cries sometimes seem very real and loud, but he doesn't seem to actually be awake. He's just hollering a little to himself as he readjusts his position. You know I'm not one for leaving a baby to cry, but I've found that if I go in at this time, he gets more awake and requires a lot of help to go back to sleep, whereas if I leave him, he quiets down in under a minute. I think it's just a step on the process of learning to go back to sleep on his own when he wakes up.

Another breakthrough that has made me unspeakably happy is that he sometimes sleeps through the night. One morning about three weeks ago, I woke up to find him toddling into my room and climbing in bed with me -- at 6:30 a.m. I realized I hadn't seen or heard him since I put him down at ten the night before! I have never been so happy to be woken up before. Now he does this maybe once or twice a week. It's not yet a habit, but he's slowly getting the hang of sleeping through the night.

I think the main reason he is beginning to sleep through the night is that the techniques from The No-Cry Sleep Solution are beginning to pay off. Basically, the goal of NCSS is to get your baby to go to sleep with as little as possible -- in other words, not while nursing, being rocked, roaming the neighborhood in a stroller, etc. Because if the baby always goes to sleep with these things, he'll need them when he wakes at night, too.

The problem with this is that babies don't just lie down in their beds and go to sleep on their own. Instead, you slowly change your existing bedtime routine into something better. In our case, I changed from nursing and rocking him all the way to sleep; to nursing him in the rocking chair for half the time and in his bed half the time; to nursing him in the rocking chair, then nursing in his bed, then unlatching him as he's almost asleep and patting his back till he drifts off. Which is kind of where we are now, about half the time. The rest of the time I'm roaming the neighborhood in a stroller. But it's a start. It amazes me the way he will sometimes stop nursing on his own and roll away from me to go to sleep!

I know most mothers of 14-month-olds already have their kids sleeping through the night. In fact, they probably rely on tucking them in at the same time each evening with a stuffed animal and not seeing them again until morning. I still struggle over bedtime: he just seems tired at different times depending on the day, and sometimes I have to walk him all over the neighborhood in the stroller before he finally surrenders to sleep. But I'm still proud that we've made so much progress.

And of course there's a bit of pride knowing that I'm proof that you can cosleep, nurse to sleep, go to your baby when he cries, and it won't be forever. Eventually all children do learn to sleep on their own -- it's up to you and your child when that will be.
Posted by Sheila at 11:30 AM

I am a new reader to your blog and really enjoy it. I just wanted to let you know I am mommy to three so far...all of them have been co-sleepers, nursed to sleep, and have never "cried it out" and have successfully learned to sleep on their own. Sleeping arrangements are all about what works for your family. We certainly got a lot of well intentioned advice, but I am glad I just went with my instincts. Congratulations on your little guy's sleeping through the night! :)

My daughter recently started sleeping through the night around her second birthday... She still doesn't do it ALL the time, but in the morning when I wake up and realize she has, I am so thrilled! Hahah.