That would be Latin for "garden crazy"! 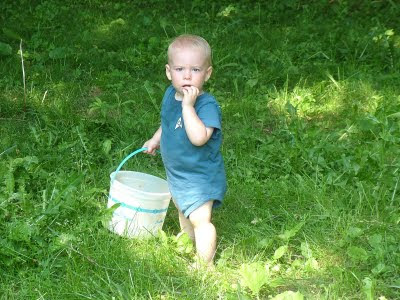 Time for a garden update! We had a week of torrential rain, and then a week of broiling sun. It's put a real dent in our playing-outside time, but the plants mostly weathered it fine. Our clayey soil is pretty good at soaking up all the water and releasing it slowly for the plants -- as long as it is well covered. Otherwise, it erodes in the rain and bakes into a brick in the sun. Next year, I'm going to figure out something with mulches or cover crops to avoid any bare soil, if I can. Bare soil is a real problem here in Virginia -- if once you clear a patch or kill a patch (by too much traffic or putting a kiddie pool on the grass) -- it will take a looooong time to repair. I'm slowly working on the bare spots in our yard, with mixed success. I think by the end of the summer the yard will be almost all covered, in the front at least.

The tomatoes are my star crop, the only one I spent any serious effort on. That is to say, I bought seedlings and started some of my own rather than just dumping seeds in the ground and calling it a day. I think the tomatoes really appreciated the water.

This one's my star: 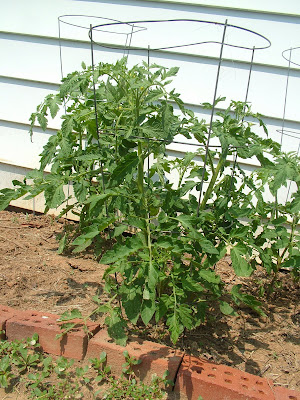 This one is showing I should pay a little more attention to my plants. It grew out of its tomato cage during the rainy week and I didn't see it until it was too far out to easily put back in. I think I'll just let it be -- what do you think? 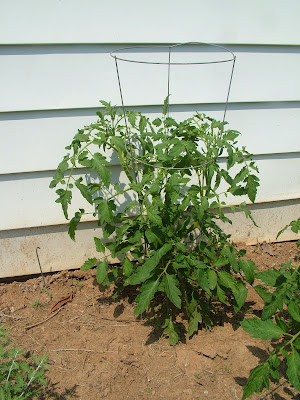 I've had a lot of these tiny black bugs on the plants. I don't know what they are; they have little wings but just sit there on the stems. I hosed them off yesterday, which got rid of most of them, but they're already beginning to return. 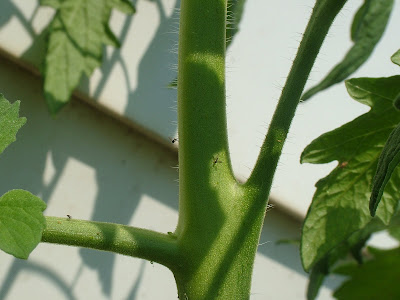 My sage plant, bought at the farmers' market, is showing my lack of foresight. I just saw it, thought "well, I love sage" and bought it. Only it tastes really bitter and not like sage at all. Turns out, it's Russian sage, which isn't actually in the sage family, and is an ornamental. I'm not big on ornamentals, I want stuff I can eat. Does anyone know if you can eat Russian sage? Or does it remain bitter whatever you do? 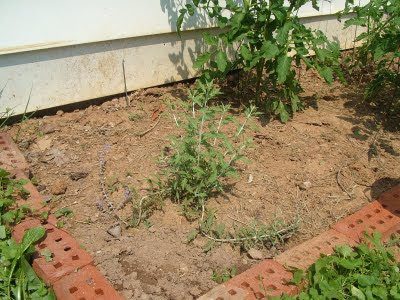 Here's the pot that is supposed to contain oregano. I don't know what all these seedlings are; from what Google Images found for me, they might be oregano. Or not. Some of them were definitely dandelions and clover, so I pulled those. But what about the big ones on the edge? Might those be oregano? 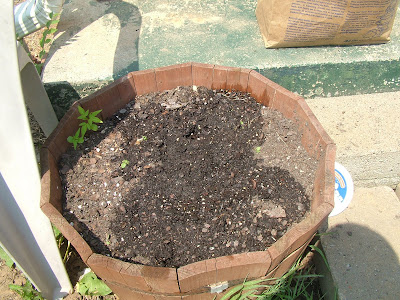 Don't let it discourage you that my oregano hasn't come up. This is the pot the baby prefers for digging and dumping water. Those seeds have been drowned, parched, pulled, and mostly lost. If anything does come up -- anything worthwhile I mean -- it will be a miracle. 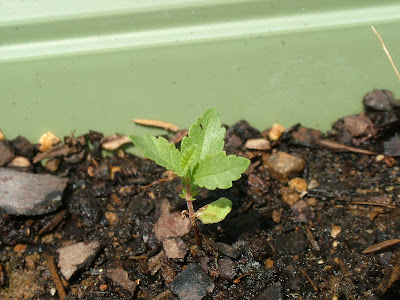 And this is definitely cilantro -- those leaves give it away. 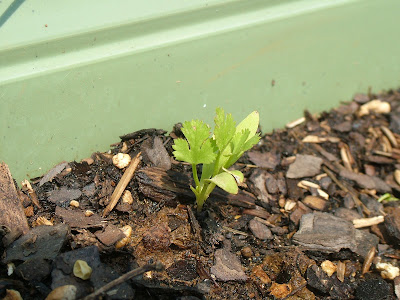 My green beans have definitely failed. The rain was the last straw for them -- they were devoured by slugs or something. Probably slugs; I found a ton around my tomatoes and spent ages picking them out, but didn't even look at the green beans till the sky had cleared. Oops. In any event they were doomed from the start: that patch, which promised to be at least partly sunny when I built that bed in the spring, is completely shaded now.

This is the alivest green bean. Sad. No point in replanting them here; I will have to wait till I have another sunny bed dug, because this was clearly the wrong place for them. 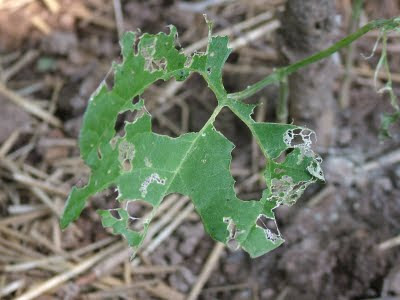 The raspberry plant, in the same bed, isn't growing that well either. I may try to move it next year. This year, it looks like it might give me four raspberries or so. 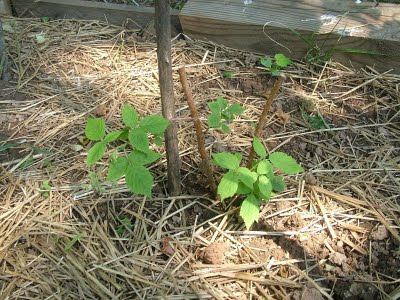 Check out my compost pile. We've been getting the Sunday Washington Post in error, so after reading the comics and doing the crossword, we shredded and composted it. I hadn't intended to compost newspaper because of the ink (I don't know what's in it, and wanted to keep my pile natural), but it was becoming just one big mess of kitchen scraps and a bit of grass clippings. That was getting stinky and attracting flies. Ideally, a compost pile should have more "brown" waste (dry leaves, wood chips, paper) than "green" waste (grass clippings, kitchen scraps), but I have very few sources of brown waste at this time of year. 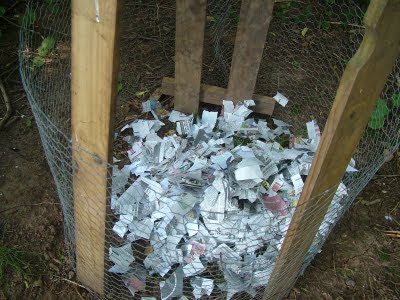 Our backyard is proving to be a tough beast to handle. We have a little (safe, inexpensive, and environmentally-friendly) push mower that is not really equal to the task. To be honest, it might take a machete. The yard is full of tree roots and truly evil dandelions. I didn't know before that dandelions could look like this: 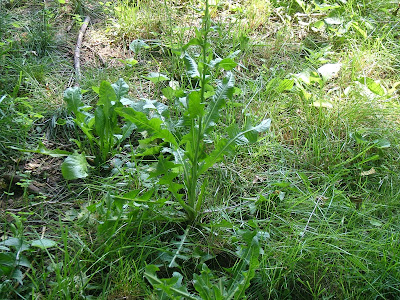 I mowed it last Friday, and was pretty much swarmed by the bugs whose habitat I was destroying. I got blisters, too, and was completely beat by the time I was done. Sooner or later, that lawn is going to defeat me, I'm pretty sure. It wants to revert to jungle. Nature abhors a vacuum, a monoculture, and (here in Virginia) navigable back yards.

As usual, the baby loves to be outside. We have to watch out for sun and mosquitoes, though. It's boiling hot from ten to about three, and in the evening we get eaten alive. I'm going to try putting garlic on us, and eating some -- I hear it helps. I know back in Seattle, I got bitten a lot less when I'd been eating garlic ... but these Virginia mosquitoes are big baddies compared to the mild-mannered Seattle version, so I'm not sure that will be enough to faze them.

I do have to think of something, though, because this kid loves his outside time. So do I -- despite the heat and the critters, I sure love watching him play. 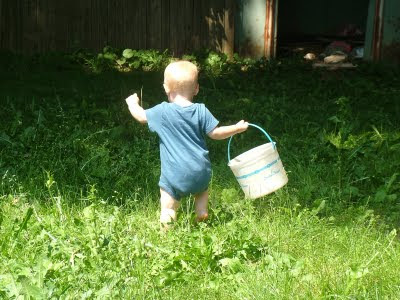 I really love the last photo of Marko walking off into the grass with his bucket...it looks like a postcard; it would look great as a black and white print, I think.

I'm so jealous that you are having any success at all. I swear my husband and I have black thumbs. We kill everything. I will say - if you need a confidence booster, plant some mint!! We planted some when we first moved in 3 years ago and it's overtaken almost our entire garden... which is fine since we kill everything else and mint smells (and tastes!) good ;)

We get some nasty, killer dandelions in our yard too. GOOD LUCK getting rid of them!!

I'm afraid the oregano and thyme aren't - but the real seeds might still germinate eventually. If they do, have patience; since they're perennials, they grow really slowly in the beginning. Good luck and have fun with your garden!

I am not even going to try to get rid of those dandelions completely. I just mow them down. If I dug them out, my lawn would be mostly huge bare patches. So I just hack at them from time to time, and eat them sometimes.

Anna -- thanks for the identification. I'll keep watering the empty pots, and see if anything comes up.

I love how cute he looks, marching off with his bucket to discover the wild, untamed frontier of your backyard--and I see I'm not alone! =P

There's something about the mix of cuteness and purposefulness in that photo . . . The colours are fantastic, too. You should really have it framed, Sheila! =)

I am definitely considering it! It turned out really cute, and it definitely shows his independent little personality.

Russian sage is a wonderful butterfly-attractor. I really want some and haven't seen it around here, except in the garden at the natural-history museum.

So even though it's probably not that edible, if it brings pollinators to your garden, it will be doing your veggies a favor. Plus the flowers are pretty. I interplanted my vegetable garden with zinnias this year, as well as the usual pest-controlling marigolds, just to have some flowers to cut and to make it all look more colorful. The French do things like that in their potagers, so why not?

Oh, and I'll echo Anna: thyme and oregano take *forever* to germinate. For. Ever.

We use both a push mower and a power mower on our very weedy lawn. Even with our basically low standards for lawn attractiveness, the push mower alone just can't handle the tough stuff. If we power-mow, I can then keep it more or less under control for several weeks with the moral manual mower, if I stay really on top of it, but otherwise, it's a mess. You might consider borrowing a power one to get things under control, then go from there.