What is nutrient-dense food?

So I was talking in my last food post about nutrient-dense foods. These are foods, usually animal foods, that are very high in nutrients (vitamins and minerals) for the amount of calories they have. I decided to illustrate what I mean by calculating the nutrient content for each of the parts of a sample dinner.
The dinner is beef liver, salad with dressing, and brown rice. I actually made and ate the salad ... not the liver though. I don't like it, but it's a common example of THE most nutrient-dense food there is. Other organ meats and shellfish are up there too.
First, let's look at the salad, where many people expect the nutrient powerhouse to be. It's a pretty good salad, containing lettuce, tomato, green pepper, carrot, and a bit of lacto-fermented kimchi, with an apple cider vinegar and olive oil dressing. Here's how CRON-O-Meter analyzes that salad, according to my benchmark of 2122 calories per day: 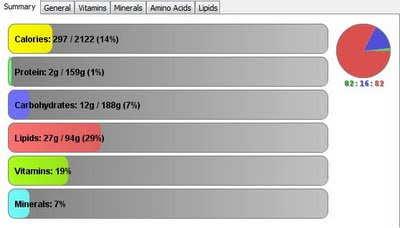 Most of the calories come from the olive oil in the dressing. I put down two tablespoons of oil because I like oil a lot and it was a HUGE salad. I made it in a mixing bowl for lunch. So, picture a great big first-course salad, not a tiny side salad.
Here are the specific vitamins present in the salad. The vitamin A is mostly from carrots and is in the form of beta carotene, which, as I've mentioned before, some people are not able to convert to vitamin A. But let's assume I am ... so I'm set for vitamin A from this salad! The rest of the vitamins are not as impressive. There's plenty of K from the green vegetables, and some C from the tomatoes, cabbage, and peppers. The level of E is good too (remember I was deficient in that lately?), because olive oil is a great source of vitamin E. 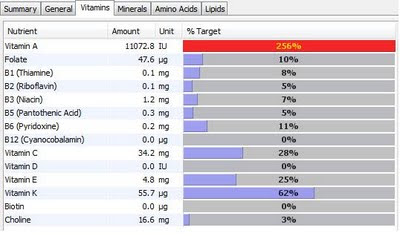 What about the liver? How is it doing for nutrients? This serving is one slice of liver, about four ounces. 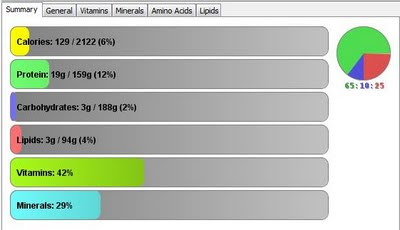 It contains most of the protein from the meal. Liver isn't very fatty and has few carbohydrates. But it contains 42% of your daily vitamins from only 129 calories! That's very efficient, compared to the salad which had 19% of your vitamins in almost 300 calories. Of course calories are important too, but to get enough of your vitamins from salad, you would have to eat way more calories than you should.
All right, here are the vitamins in liver: 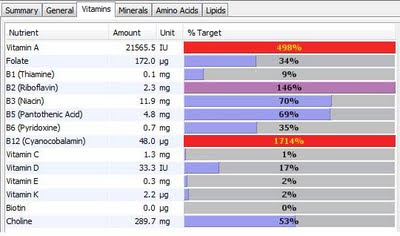 Almost five times the A you need! Seventeen times the B12! B12 is water-soluble, so it's virtually impossible to overdose on. A is oil-soluble and you can, theoretically, get too much. It's probably not a danger when obtained from natural foods, but liver should be more of a once-a-week thing than a daily dinner. Our B vitamins are plentiful. (Biotin shows as 0 because there is no RDA for it -- it's manufactured by intestinal bacteria.) It really pulls its weight as far as nutrients per calorie. Although it would be quite unnecessary to eat a lot of liver, having a little here and there is as good as a vitamin pill. Regular beef is not such a powerhouse, but it also contains large amounts of B12 and other important nutrients, so it's another good option for a nutrient-dense food at dinnertime. You can see, though, that to get enough K, C, and E, for instance, we have to turn to vegetables, like those in our salad.
Last of all, let's turn to the rice. I picked brown rice because it's supposed to be much healthier, though there's debate over whether we can actually absorb all the vitamins it contains. They are bound up with something called phytic acid which can block their absorption, and there are a lot of different theories as to how you'd get rid of these. For the sake of this experiment, I'm going with CRON-o-Meter and assuming we're absorbing all the nutrients available. 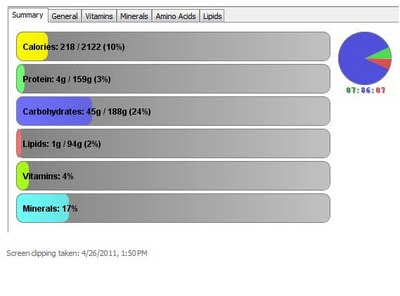 Rice of any kind is mostly carbohydrate. Brown rice, though, has a small amount of protein and fat -- 4 grams of protein and one of fat. In that whole cup of rice, there are only 4% of the vitamins you need. Minerals do a little better, though I didn't analyze those specifically. The main ones in brown rice are manganese, magnesium, and phosphorus. Here are the vitamins in the rice: 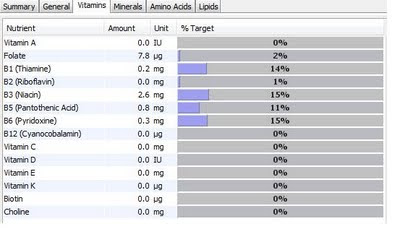 It's a good source of B vitamins, making up for the relative lack of thiamine in the liver, but it has very little else.
Here's our whole meal together. It comes in about right for calories -- just shy of 1/3 of my daily requirement. It's rather high in carbs and fat compared to protein. I still don't know what the ideal ratio of these three "macronutrients" is, but I could probably use a higher proportion of protein here -- perhaps by having less salad and more meat, or else throwing some chickpeas or sunflower seeds in my salad. 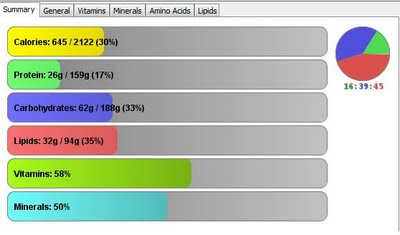 As far as vitamins go, we have more than 30% of every vitamin except D and E. D is a tough one, coming mainly from pastured meat and oily fish. It's also in dairy -- can you believe I came up with a dairy-free meal? Some of your daily D can also be obtained from about 20 minutes in sunlight. Don't take a shower right after, though -- give the skin some time to absorb the D! E is mainly found in seed and nut oils. I've had some trouble finding convenient sources of it, besides olive oil. I hear it's in broccoli, too; that might help. I didn't copy the minerals, but the only thing we're low on is calcium. Again, getting some dairy at another meal would be a good idea. 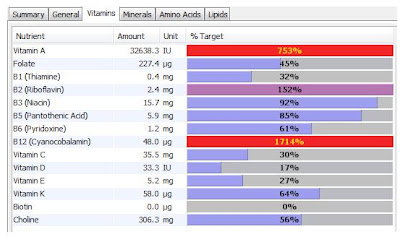 A fruit could make a nice dessert to this meal, but a sugary dessert or drink would pretty much ruin what we're trying to do here. Our calories would be increased with no nutrients gained at all -- and sugar spikes the blood sugar, too.
So here are a few questions to consider: What parts of this meal are most nutritionally valuable, and which are merely seasoning? If you were going to have seconds, what would you have seconds of? If you were trying to cut calories, what would you skip?
Conventional wisdom would tell us to leave the dressing off the salad. But that olive oil provides almost all of the vitamin E for the whole meal! Though it does add a lot of calories, we can't afford to cut it altogether. Instead, I'd skip or reduce the rice --it's mostly a cheap filler, making sure we don't go to bed hungry, while being a complex carbohydrate that doesn't upset the metabolism like sugar would.
And the most valuable, nutrient-dense food? Of course, the liver. No wonder it's so highly prized by traditional cultures!
Posted by Sheila at 2:09 PM

My understanding is that oil and salad greens were meant to go together, as the oil and vinegar helps in making the nutrients more available - or something to that effect.

Yes, this is true. Vitamin K, for instance, is fat-soluble, so it will absorb best with some oil. The same is the case for most veggies -- better with just a smidge of butter or oil.