I keep having ideas for posts, but not getting the time to flesh them out. It was put off blogging even longer, or just give some snippets and post tonight -- so I chose the latter.
We have a date set for closing on our house -- Friday! So let's hope all the last pieces fall into place and this can happen for real!
I am SO excited about gardening in the new place. Yesterday I started some tomato seeds in sour cream containers. I hope they sprout. I know next to nothing about seed starting, but I put in three seeds per container so hopefully at least a couple come up! Tomatoes are the only thing I will get in the ground this spring/summer, but I hope to get some more ground dug up in time for a fall crop. I want to grow peas or beans to improve the soil (which is pretty terrible). Does anyone know anything about growing peas and beans in the fall?
Lately I've read two different memoirs about homesteading. My favorite was Homestead Year by Judith Moffett. It makes me want to keep bees! Only ... not really. Much better to read about, especially seeing how ornery her bees are! The idea of eating only what you raise and grow appeals to me very much, though I don't know when or if I could ever manage to do it.
The baby turns one tomorrow. I absolutely cannot bear it. This year has gone by so fast. My tiny squishy newborn is a big ol' toddling boy and I'm not really sure how it happened. 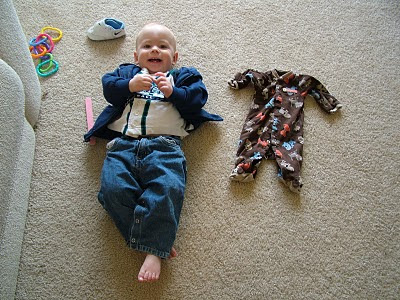 Can you believe that sleeper ever fit him?!
Last night I spent some time rolling around a ball with him. He had a lot of fun, but after awhile he lost interest and I went back to my desk. Maybe twenty minutes later he came up to me, patted my lap, signed "nurse" (a word he uses for almost everything lately) and pointed to the ball. When I got up and went back to playing ball with him, he was thrilled! He also seems to understand a lot more of what I say. And he points at everything to hear the word for it. He's beginning to learn the parts of his face -- the other day he was into something he wasn't allowed to have, and when John said, "No, no, no!" he gleefully pointed to his nose!
He's already beginning to grow out of a few of his 12-month clothes. He just seems enormous to me; barely small enough to hold at all. When we go places, I might carry him from the car to wherever we're going, but then I put him down. He's just too big to hold for long. Luckily he can walk well enough to keep up with me, especially if he's got my hand to hold. I would like to keep him in a carrier, but he's outgrown both the Moby Wrap and the mei tai, and the sling is a bit uncomfortable at his weight. I wish I had a woven wrap, but I'm not sure he'd be keen on it anyway. He's just so into walking.
I still don't put shoes on him. He has a pair of shoes, and on one cold day I tried to put them on him so he could go outside. He didn't mind much, but he couldn't walk. Just one step and he'd be on his face. I guess his toes really need to be able to feel the ground! Today he found a puddle and was just dancing around in it. I would have though it would be too cold for him, but he loved it!
I've started exercising lately. This is a BIG DEAL for me, because I'm a person who NEVER "works out." I get on a kick that lasts maybe two days and then I stop again. I like being outside, and I sometimes take walks, but actual exercising is beyond me. What changed? Well, the baby loves it when I get down on the floor with him and do some exercises. I generally start with some squats. Those seem easy (at least, once I figured out that holding my arms out in front of me kept me from falling on my backside) but left me quite sore in the morning the first couple of days! I'm working up to being comfortable enough squatting to make it a good resting position. The baby is better at it than I am. Maybe I will write a post sometime about how his instincts lead him to find much more body-friendly positions than common for adults in our culture. Anyway, I follow the squats with some push-ups, finding much to my shock that I can do 20 real push-ups without too much trouble. I used to be able to do only girl push-ups, and then maybe five real ones. I guess carting a gradually-increasing weight around for a year has helped my biceps.
I still can't manage sit-ups, which is sad because I used to be able to do 200 of them. My abs just don't feel right -- still all stretched-out and with a little gap in the middle. Not sure what the cure is for that. My substitute has been various kinds of "rocket ship" with the baby on my knees or feet. He definitely likes to be involved!
I have discovered recently that I can eat many vegetables I thought I hated if they are prepared correctly. Example: collard greens. Collard greens are kind of nasty, whether "seasoned" or not. The baby agreed -- when I gave him some, he spit them right out, which he almost never does with a new food. But creamed collard greens? Food heaven! I just make a thick bechamel sauce and dump in the cooked collard greens, and they are perfect! Another example is split pea soup. I've always found it kind of boring. But with sour cream, it's scrumptious! (It also helps if you really cook it with a ham bone like you're supposed to.) Yes, there is definitely a common thread in here ... dairy fat makes everything better. But we knew that already.
I have a grocery list from last week I'm supposed to post, but I don't know if I will have time for it before I go shopping again today! I've been focusing on buying a bit more, because we've had huge appetites lately and I don't want to skimp to the point of starving. I have a bad habit of not eating unless there's something readily available. So I'm trying to make sure there's plenty around for us to eat. It helps to plan leftovers into dinner. I also try to have plenty of fruit around. I was raised on one piece of fruit a day, but there's nothing wrong with having more than that! Veggies available for snacking are good too. And, to make everything easier, I've been making carrot muffins. With whole wheat, carrots, raisins, milk, eggs, and blackstrap molasses, they're very satisfying and relatively balanced. And, like everything else in the world, they're better with butter.
Posted by Sheila at 1:10 PM

Peas are great, and are a cool-weather crop, so if you sow them in August (I think -- depending on where you are and how soon your summer season ends, you can get in a crop before the big freeze). The only drawback is that you have to plant zillions of them to get any kind of yield. The best pea crop I ever had grew in almost pure compost, which I'd dumped into a hole in a deck, formerly occupied by a hot tub. They've done all right in the very so-so soil of my current garden. I live in a red-clay area, and while the space for my kitchen garden had obviously been a garden before, with amended soil, it's not great.

Don't forget container gardening! You can stretch your home-grown food supply without necessarily having to till up and improve a lot of ground. Many varieties of tomato do well in containers, as do peppers, cucumbers (esp. if trellised or caged) and bush beans.

I'm lousy at starting seeds -- I always forget to water them, or else over-water them. I read recently that the thing to do is dampen the soil and put a film of plastic wrap over the top to keep the moisture in, like a greenhouse. Then when the seedlings sprout, you can take it off.

Speaking of poor soil, the best cucumber vine I've ever grown was in horrible soil, on the patio of an apartment we lived in about eight years ago. I'm not sure I even planted it on purpose; we might just have dropped a seed. That vine sprang up and flourished and gave us fresh cucumbers all summer, in what was otherwise a depressing living situation. So you might try one and see if it rewards you.

Thanks for the tips!