***Warning: This is a post about potty training. It may be mildly disgusting.*** 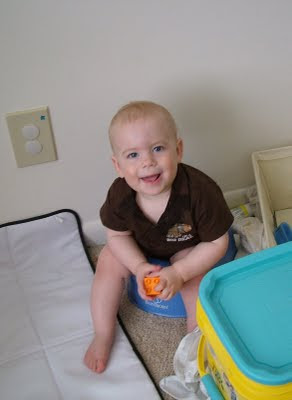 How exciting for you both that you caught his #2 in the potty! I keep thinking I'll try EC with the next one. :) I was thinking about starting it with my youngest soon. She'll be 9 months this week. I think it's probably a good age to start. But maybe I'll just wait until the next one. ;)

I don't think nine months is too old. If I could do it again, I'd start before he learned to walk ... because he keeps climbing off the potty.

So I'm not the only one who keeps planning things for "the next baby." "The next baby" is going to be born at home, breastfeed right away, cosleep, and hopefully EC. But ... maybe the next one will be like this one, and those things won't happen. Who knows!