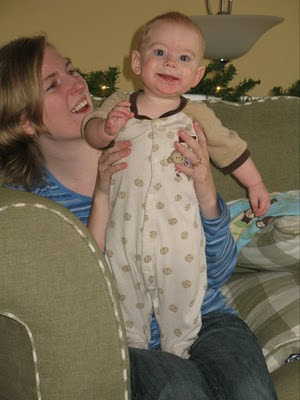 It's been awhile since I've given an update on the ol' babykins. So here's how he's doing, as of Christmas Eve 2010.

Age: 8.5 months
Weight: 18 lbs.
Height: 26 inches, give or take a bit
Teeth: two bottom ones
Recent skills: Pulling to a stand on the edge of the tub, walking all over the place (or rather, staggering drunkenly) if we hold his hands, eating LOTS, saying a few words. Still only army crawling, but he does it like lightning.
Words: Ma ma ma ma (mama), da da da da da (daddy), mummummum (eat (he's trying to say "more," but he says it when he wants to start eating too), na na na (nurse). Also lots of babbles that don't seem to mean anything.
Sleep: Pretty bad by the usual standards. He sleeps in long chunks, but when he wakes up, he's impossible to put back down. So I've tended to cosleep after that point, and he goes back to sleep pretty easily. While traveling, we cosleep all the time ... which sometimes works great, and sometimes we seem to keep him awake, because he gets restless. Looking forward to getting back to his crib, at least for a backup. Last night he woke up with me and reached out toward Daddy's spot. Daddy was gone (the bed had gotten too crowded, so he was on the couch) and Marko called out "Da da da da!" Really sweet.
Favorite games: Peekaboo, dancing with Daddy, upside-down
Favorite toys: His picture book (he likes to point at all the pictures and have me say what they are), a straw (he likes to stick it sideways into his mouth and grin at people). Also, food.
Favorite foods: meat. And more meat. Particularly beef and turkey. Also hummus, hash browns, and most vegetables. He eats most of what we eat these days, but we're still holding off on grains, dairy, and eggs.
Nursing: still as frequent as ever, though sometimes I can tell he's not taking as much as he used to. On busy days, when there's not time for much solid food, he nurses more.
Overall: Happy as a clam, busy as a bee, talkative as ... his mother. ;) Marko's doing great and really enjoying learning new things and meeting new people. As for me ... I'm managing. Most of the time I love seeing him grow. And then suddenly I remember how little he used to be and I just want to cry. He's never going to be that tiny again! These days are passing so fast.
Merry Christmas to all of you, dear friends!
Posted by Sheila at 11:35 AM

Merry Christmas to you, too! Enjoy the weekend and week!