I know, sounds like a horror story, doesn't it? In-laws are so stereotypically awful. Luckily, I happen to love mine. Sure, my mother-in-law had her doubts about me when I was just a rumor of some girl John was taking to dances. But ever since I stayed with her for about two weeks before our wedding, we've gotten along swimmingly. Plus, her family is a ton of fun. Like John times eleven.
She LOVED her grandson. I do believe she was better at getting him to sleep than I am. 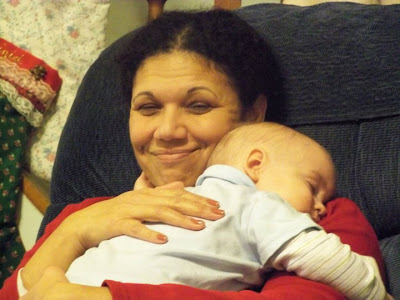 So, I was every bit as eager to take this Christmas trip as John was. He actually took unpaid time so we could go, which, if you know how little money we have and how eager we are to save what we've got, is a big deal.
Our itinerary:
Tuesday -- From an undisclosed location in the DC area to John's grandparents' house in Chicago: 14 hours.
Wednesday -- I stayed home with John's grandpa while he went out and interviewed family members for a family history he is compiling. (This is a very exciting project to me, and he's getting all kinds of neat information!)
Thursday -- From Chicago to an undisclosed location in central Wisconsin: 5 hours. Then fun with John's siblings. He has nine; one is in a convent in Italy but the other eight were there. I love them all. Lots.
Friday -- More fun with John's family. Midnight Mass for everyone but the three of us -- poor baby's schedule was disrupted enough without trying to figure that out.
Saturday (Christmas) -- Morning mass, presents, stockings, and Christmas dinner with John's family.
Sunday -- Mass, then down again to Chicago to see the grandparents.
Monday -- Chicago to DC again: about 14 hours.
Tuesday -- cranky baby, and catching up on sleep.
Wednesday -- woke up at 4:30 and had the baby barf all over me. Which brings us to today. 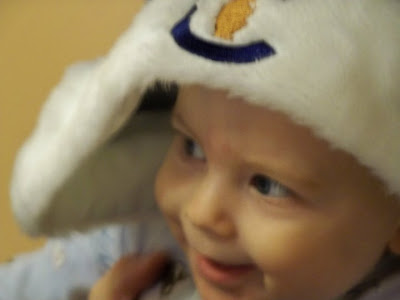 I guess it all sounds pretty stressful. And there were parts that were. Driving such a long way with a baby is a bit of a challenge. We planned to be stopping a lot along the way, and we did. Luckily the interstates in the Midwest are well-supplied with rest stops. To minimize stops, we left at 3 a.m. for the biggest trips, putting the baby into his carseat half-asleep, so that he would spend as much of the trip as possible asleep -- and avoid spending the witching hour in the car, which you really don't want to do.
The rest of the way, we mostly kept one of us in the back with him (usually me) to keep him occupied. I'd hand him a toy, he'd play with it for two minutes, he'd fling it off the other side of his carseat, and I'd give him another. Repeat. Then he'd decide he was hungry out of sheer boredom and start saying "na na na" or "mum mum mum." Na-nas being rather difficult to provide in a carseat (though not technically impossible ... probably inadvisable) we relied heavily on the mum-mums, i.e. solid food. He liked being handed piece after piece of turkey or cooked carrot. On the way back, we had no food, so we ended up buying a roast beef sandwich at Panera and giving him most of the roast beef. He liked that fine. 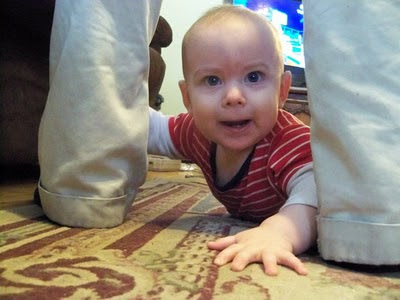 While visiting John's grandparents, we stayed in a hotel. Hotels will provide cribs, but we found that unnecessary -- besides, when they say "crib" they usually mean "Pack 'n' Play" and I can't figure out for the life of me how you're supposed to put a sleeping baby into one of those without waking him. So we put the baby between us in the king-size bed, no trouble at all. Except for how high those beds are. I hate beds you have to climb into; I guess I've been spoiled with my low-to-the-ground IKEA bed. But how are you supposed to climb into a tall bed while holding a sleeping baby? Other than that challenge, we had no trouble sleeping with the baby on the trip. I've been sleeping better and better, and I haven't had much use for his crib since we've gotten back either. It's nice to start him out in, but other than that, why put him someplace else when he's so much more comfy in my arms? It helps that we've pretty much mastered lying-down nursing. Not to mention, he actually needs nursing less if he's in bed with me, because often a "shh" or a back pat does the job just as well, if he doesn't get too wide awake first.
John's grandparents are so sweet and kind. His grandma kept heaping praises on me, about what a great mother I am, and how clearly our baby is so advanced and friendly and independent because we are such loving parents. Personally, I think it's mostly in his temperament, but I don't really mind being appreciated all the same. 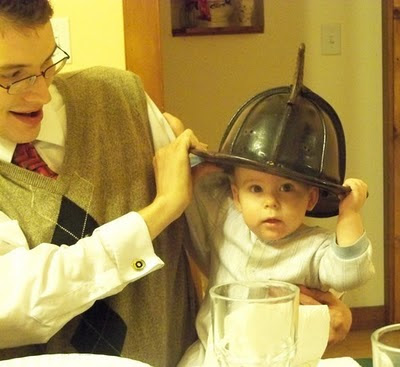 John's great-grandfather's fire helmet
Arriving at John's mother's house was an even bigger thrill. The baby was so glad to be out of the carseat, he went straight to playing and entertaining everyone. The whole time, he had no objections to being passed around like a hot potato, provided I stayed close and he could have "ma ma ma" and her "na na na" whenever he wanted. (John's mom would always laugh when he started in on the "na na na" and say, "Sorry, I haven't got that anymore! You'll have to go to Mama!")
And oh, man, the FOOD ... there was lots of it. And it was good. They have cows, chickens, and pigs, as well as a large vegetable garden, so that even though it was winter, there was still plenty of "real" food. Also there was tons of candy ... and I'm not going to lie, I ate that too. But now I feel ready to give it all up for awhile and just eat healthy food.
Again I got a lot of praise for being such a good mother. They seem to think I'm some kind of supermom, just because I'm educated I guess? Also, I seemed pretty mellow and relaxed ... which is no wonder when you realize how much they helped with the baby, and how I took all of his naps with him too. If they could have seen me today, I doubt they would have thought me very relaxed.
There were also a ton of presents. I guess that makes sense with so many people to give and receive them. Marko got so many toys! Though I think he might have liked the wrapping paper best. I got an ice cream maker -- and you better believe I'll be blogging about that once I've tried it out! 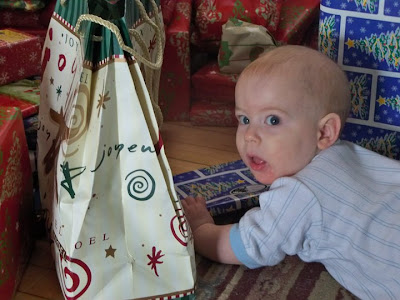 The way back seemed even longer than the way out. On the bright side, it counts as "quality time" for John and me. We get so little time even to talk these days.
Then today, baby had a stomach bug. There was some upchucking and some nastiness out the back end too. Not my ideal day when we're all tired from traveling and I had lots of laundry to do already. I still haven't had a chance to restock the groceries. But I guess I shouldn't be surprised. The whole trip is very tiring, and I know he was exposed to lots of bugs. There's no saying where he could have picked this one up.
I sure hope tomorrow is a restful day. I mean, aside from the mega shopping trip I need to do. The good Lord knows we need it.
Posted by Sheila at 5:38 PM