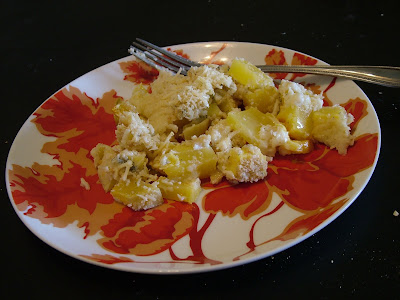 When we came back from our trip to Chicago, we were due for a grocery trip. We were out of almost everything -- I had Tuesday's dinner planned, but nothing else for me to eat until then. But I really, really didn't feel like going shopping.

Then, in the teacher's lounge after class, I saw some squash on the table. The note read, "Cocozelles. Sweet and delicious squash. Cook like zucchini. Take what you want."

I am all over free produce. And I know I like butternut, spaghetti, and some other squashes. So I took one gourd-shaped squash and brought it home, figuring it would save me from having to go shopping by providing me with lunch and snacks throughout the day. But I'd overlooked one thing. "Cook like zucchini" does kind of suggest that it's something like zucchini. And I can't stand zucchini.

The Joy of Cooking confirmed the suggestion ... cocozelles are a summer squash very similar to zucchini. But I decided to see what could be done with my cocozelle all the same. I cut it in half and cooked the first half with olive oil and salt. It wasn't half bad. But for the other half I resolved to do something different.

I diced the cocozelle small and spread it in a casserole dish with a drizzle of olive oil and some salt. Then I added some yogurt and dill and mixed that in. Bread crumbs and parmesan cheese for the top. I baked it for about half an hour.

You guys, it was delicious. I really, really enjoyed it. It tasted sort of Middle Eastern, with the yogurt and dill sauce (which has always been a favorite of mine). If I had to do it again, I might add a touch of lemon. Other than that it was perfect. It could make a whole dinner, I think, or a side dish instead.

It totally reaffirms what I keep saying about cooking within limitations. I had so few choices about what to put on my squash that I couldn't fall back on the old standbys -- cheddar cheese, for instance. Not to mention I wouldn't have branched out to squash at all if I hadn't been running low on things. One of these days I'd like to get a farm share box so that I'm forced to experiment with the different vegetables I get each week. It would keep things interesting!


This post is included in Vegetarian Foodie Fridays. I'm not a vegetarian, but being Catholic, I am on Fridays!
Posted by Sheila at 7:00 AM

This looks and sounds delicious! Bravo! I'm going to try this with a winter squash today. I'll let you know how it goes!

That looks beautiful. Nice and easy to make. Great idea! Sorry I am so late in commenting this week, but belated thanks for linking at Vegetarian Foodie Fridays!