Holding my grandma in my prayers 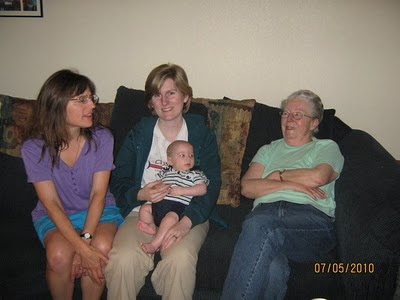 When I visited my family in July, I got to see my grandma J (my dad's mom). She wasn't feeling too well, but decided to make the trip to see us. We were still unsure what was wrong with her; she'd had some various health problems and was seeing a doctor to try and figure out the root cause.

A short time after we returned to Virginia, we heard the news: it was cancer in her liver. They were giving her ten months with aggressive chemo; two months without it.

A couple weeks ago, she had some very serious reactions to the chemo. It was killing her faster than the cancer was, it seems. So she quit the chemo, left the hospital, and went home.

So it's very timely to talk a bit about Grandma as I hold her up to God in my prayers. Not because she seems to need it -- she is handling all this better than any of us -- but because I love her and prayer is the only way I can be close to her right now.

I don't know as much about her as I do about my mom's parents, because my mom is the storyteller of the family. I don't know her life story, only bits and pieces that she's happened to mention -- for she is also a storyteller of sorts.

She met my grandfather in the Navy. They were married pretty young (like everyone in my family, it seems). She is from an Irish family whose Catholicism is so engrained as to be rarely mentioned.

She's a tough lady, someone you can't really wear down or wear out. The stories I've heard from her are all about her standing up for herself or someone else: the one where she stood up to my dad's teacher when he wouldn't believe my dad was really sick, the one where she was giving birth to my aunt and ordered the doctor to "come over here and catch this baby," the one where she told my aunt that if she didn't come clean her room, Grandma was going to "open the window and start pitching." (I believe she really and truly did pitch all the stuff out on the lawn!) Each story leaves you laughing -- Grandma's got a great sense of humor, just like my dad.

Her life hasn't been easy, from what I know of it. She moved all over the country following Grandpa's Navy postings. (My dad went to 12 different schools before college.) In many ways she had to put her own wants aside and spend her time facilitating everyone else's. There was one summer in which the family lived on a houseboat. "That sounds like so much fun!" I said, when she told us about it. "It was, for everyone else," she said. "But when you're a mom, the only difference in your job is that everything's a lot harder and there's no running water."

Grandma's the one who taught me how to sew. I stayed with her for a week while we worked on my first project -- a flannel nightgown with pawprints all over it. I learned how to run a sewing machine and how not to be timid when I cut the fabric. I had thought it was ladylike to be timid; she taught me otherwise.

I hope when I am close to death, I face it with the guts Grandma does. She says she isn't too worried about dying; she just worries about leaving Grandpa because he isn't really ready to lose her. (Perhaps I'll write another time about how Grandpa's been, serving her and loving her to the utmost, doing everything he can to help her feel better and feel loved.) 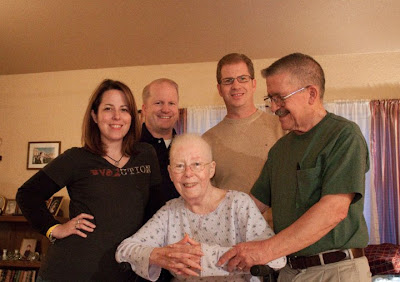 Grandma with her husband and children
If you want to join me in praying for her, I know your prayers will be appreciated -- and heard.

Sheila,
Much comfort to you and your family, especially your grandfather... and many prayers for your peace.

As for your grandmother, the peace of the dying is something that inspires and confounds me, and it sounds as if she has it all figured out in her heart. While the rest of us left behind are left with memories and questions as to why, it seems the one we lose always know. I pray she rests sweetly and comfortably in His care.

I really hope your grandpa is doing fine.

A beautiful story for a beautiful - and beautifully hardy and inspiring! - woman. Prayers going out to her, your grandpa, and all of your family.