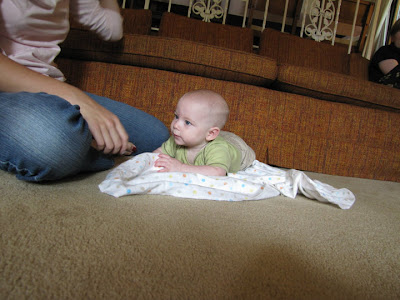 Over Labor Day weekend, we drove up to Chicago to visit John's grandparents. (I didn't tell you guys ahead of time, according to my usual safety policy.) It's a 12-hour drive, not counting the stops we made every two hours or so to let the baby out of his carseat for a snack and a diaper change.

Normally, I wouldn't recommend taking that kind of a road trip with a baby. But it turned out to be ideal. Marko sleeps very well in his carseat and is pretty good at entertaining himself by looking out the window or playing with a toy when he's awake. Once he begins to crawl, I imagine this golden window of driveability will close, so I'm glad we went when we did.

We chose to go because John's grandfather has heart trouble and we didn't know if we'd be able to see him when we next visit John's family. It was very important to us to introduce him to his great-grandson while he's still well enough to play with him. 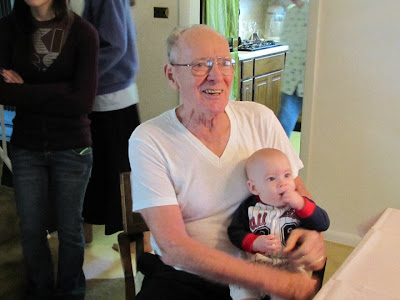 In the end, we saw not only John's grandparents, but also most of his siblings and a slew of aunts, uncles, and cousins. It was great. They are all such sweet people and Marko really liked them. I thought he'd be overwhelmed, but he wasn't until Sunday evening, when they had a big get-together. Too many people and he does reach his limit. 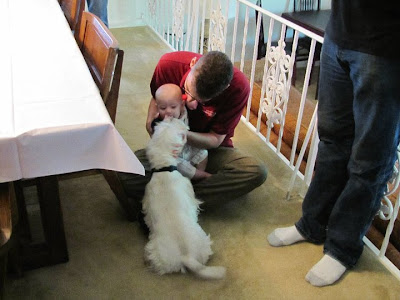 Baby's a much better traveler than he was two months ago. Of course we didn't have the time change to worry about either. We stayed in a hotel. Hotels do provide portable cribs, but they're really more like playpens and I don't care for them, so he ended up sleeping in our (king-size) bed.

It was amazing. Normally he won't sleep in our bed. I have no idea why -- is our room too hot? maybe there's not enough space? -- but in the hotel he was perfectly willing to sleep in our bed and slept quite well the first two nights. (The third was a bust -- he had gas, I think.) Since there was plenty of room, we were able to give him his own space with no pillows or heavy blankets. I was exhausted enough that a bit of wiggling from him didn't bother me much.

In fact, I found my sleep was completely different with him in the bed. I would doze a bit, wake up in exactly the same position, and find that hours had gone by though I'd had no dreams and hadn't really felt like I'd been asleep. However, I felt refreshed. It was very strange, but not the least bit unpleasant (until Sunday night when he slept so badly ... we were walking the floor with him, which is not a favorable "sleep position). And there was one more unexpected consequence -- my milk supply SHOT up! I could have fed twins. He wasn't nursing more at night than usual; it was just the proximity that made the difference.

I wonder if the extra closeness helped him handle the new environment better. I am pretty sure that having tons of milk every time he wanted to nurse helped keep him a good nurser despite the different circumstances. 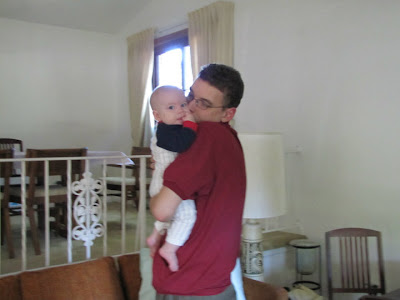 The experience was enough to sell me completely on cosleeping, but it isn't working now that we're home. He just won't sleep. Either one of us moving wakes him up, or a different position wakes him up, or I can't sleep because he's wiggling a bit in his sleep and I'm afraid he's going to stuff his head under the pillow. It doesn't help that he's not much into nursing lying down -- he'll do it in the daytime, but at night he just can't seem to figure out what to do. So I have to get up to feed him anyway, lying down again once he's nursing well and dozy.

All in all, it was a wonderful trip. John has an awesome family. I loved the way they doted on the baby. Some liked to play with him on the floor. Some liked to hold him for games like airplane and peekaboo. The older people mostly just liked to hold him, which he seemed to like too. It was great to be able to sit back, relax, and watch my baby being entertained by others! 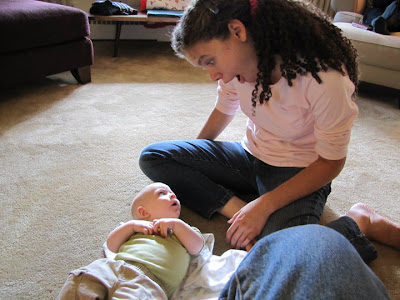 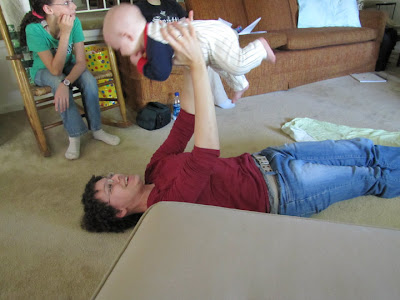 14 aunt/uncles, eh!? Wowee! And no wonder they know how to treat an infant: most should have plenty of practise by now.

Haha, yes, they definitely do. For that matter, so do John and I -- we are each the second oldest in our family.

I was actually quite curious when I heard that you'd gotten a crib. I had you pegged as a co-sleeper and have actually been meaning to ask you about that for some time now. (It never really occurred to me not to co-sleep.)
Awesome that Marko had so much fun with his family!
On a completely random note, I would love to read about your thoughts on vaccines. I am having an amazingly difficult time finding any kind of calm rational argument for or against vaccines. So if I could put in a request for a vaccine post, that would be awesome. :)