Or, a tiny bit about one of the most amazing people I'll ever know 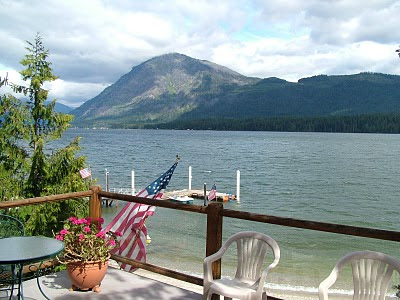 The main reason I went home was rather obvious. It had been one year, almost exactly, since the last time I had seen my family, so we were definitely due for a visit. I missed my family very, very much, I know they missed me too. And, of course, they'd never seen the baby.
Another reason, though, that this visit absolutely had to happen is that my grandpa is sick. He has cancer. He's been sick for some time, and I've been hearing the updates about him from home. They worried me, but they didn't really hit home that much. Numbers were up; numbers were down; he's started this medication; he's stopped that medication. What does that even mean? All I knew is that I had to see him. I'm pretty close to him and I love him a lot. 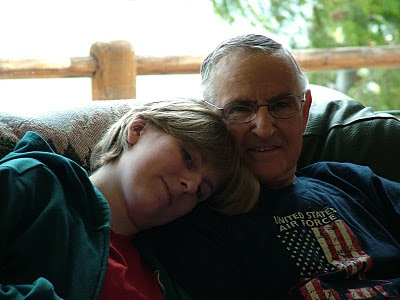 I was quite relieved to find that he doesn't look much different. But it was still something of a shock to me. We've seen him through a heart attack before, but I've never seen him taking it easy before. Never seen him need help with anything. I still have never heard him complain, but I knew he wasn't feeling so great either.
I don't want to talk about the sickness. It's not just denial. I simply think that it's better to think of the kind of man my grandpa is, the things he's achieved, the things I love about him.
Grandpa was an Air Force fighter pilot during the Vietnam War. During that time he was shot down twice (rescued quickly both times). He also won the Air Force Cross for commanding a complicated and challenging rescue of two downed pilots. For that mission, he spent 9 hours in the cockpit, a record which I believe is still standing.
He brought his family to England, Germany, Italy, and Iran. Even though he was often gone, my mom remembers him as being a wonderful dad. From standing on the roof to watch his older daughter's dates through binoculars, to winning a bet by getting my mom to think dog food was corned beef hash, I've heard dozens of hilarious stories about him. There was the time he snuck out of the house with my uncle to run a 100K race that my grandma forbade him to run. Or the way he (and all his friends) would allow my grandma to give them placebo injections and bed baths while she was in nursing school. I feel like I was there for so much of this time, the stories are so vivid -- and so characteristic of him.
When you meet him, he seems very phlegmatic, very matter-of-fact. When he talks about his missions in his fighter plane, he sounds like he's describing a boring day at the office. He had carved a number of beautiful birds' heads for my grandma to hang her towels on, and when John complimented them, Grandpa just said, "Well, when I see a bird on the lake, I just carve it." Matter-of-fact -- as if anyone could do exactly the same with little effort. I don't think Grandpa thinks he's particularly special ... but he is.
He likes to work with his hands. Most of the improvements in their cabin were handmade. I say "cabin" but when John saw the place, he said that it is definitely not what you think of as a cabin! Everything is done in gorgeous detail, from the kitchen cabinets (made by him) to the built-in bunks (made by him) to the carved towel holders I mentioned before. Outside there is stonework which I helped him piece together with mortar. (I mixed the mortar -- he did everything else!)
That brings me to the way he lets us kids get involved. When I was little, I spent hours in Grandpa's shop off of the garage. I would sit on the exercise bike and watch him cut out pieces of aluminum and solder them onto an airplane wing. (I forgot to mention that airplane-making is one of his hobbies. I mean real planes, not models.) As he worked, he would show me the pieces, explain what he was doing, let me feel how smooth the edge he'd been filing was. His latest project has been building a treehouse in his yard for the little boys. Because he never does a haphazard job on anything, he built it three stories tall, with glass windows and electricity. Every time the boys go there, he'll take them up to the treehouse, show them how it's going, and let them help out in one way or another.
He also likes to garden. While my grandma, a master gardener, specializes in flowers, Grandpa's garden was always full of things to eat. He would take us around the yard, showing us his latest additions, and give us fresh tomatoes or berries to eat. Every time we went there in the summer, we'd go home with a big box of cherries, onions, tomatoes, and squash.
Another hobby is photography. They have slides of some of his older pictures, which he used to develop himself in black and white. My favorite is a "stealth picture" (he used to swing his camera around his neck and hit the shutter when people weren't looking, to avoid making the Iranians angry) of a Mullah picking his nose. More recently, he's taken quite a few aerial photos of the area.
His absolute favorite thing, though, is flying. Like many fighter pilots, his preference is always to be in the air. He's walked away from so many plane crashes that my dad jokes, "There is no safer place than in a burning airplane with your grandpa!" (My dad should know; he's experienced it.) My grandma doesn't believe it, though; she hates flying with him because so many scary things always happen! I love it myself. My grandpa especially loves soaring and would take me up in his unpowered glider. Once we had some altitude, he would hand over the stick and let -- or rather, make -- me try flying myself. He always tried to get me to do tricks. 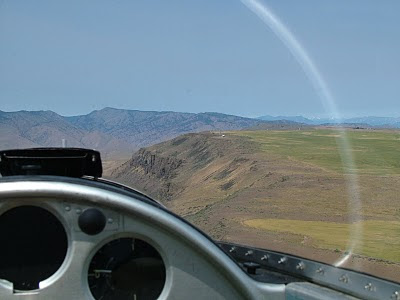 Grandpa's only son, my uncle Tiger, followed in his footsteps and became a fighter pilot himself. Sadly he didn't have my grandpa's "charmed life": he died in a plane crash almost twenty years ago.
Nothing could keep my grandpa out of the air. When he lost two of his fingers and part of a third in a carpentry accident, for awhile they wouldn't let him fly. But Grandpa persisted until he was able to prove to the satisfaction of everyone that he could fly just as well with fewer fingers, and soon he was back in the air again. Of everything I saw and heard on my visit home, the saddest was when I heard him tell my cousin that he is never getting his medical clearance back again. I hate that this cancer has managed to do what nothing else ever has, and kept Grampy on the ground.
There is so little I can say to describe this wonderful man, this man who would never think to tell you anything about himself. He's humble, he's kind, he's very physical, he isn't ashamed to cry, he's a man of great faith, he loves children, he's the kind of man that my own father says he "will never be able to live up to." He raised two daughters to be two truly amazing women, and weathered the loss of a son. He always licks his ice cream bowl. He eats off the end of his knife. He grew up in a log cabin and lived on the fish he could catch and the deer he could shoot. He likes to paddle his own canoe. 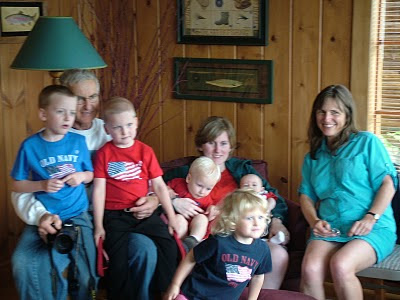 I don't know the prognosis of his sickness, though no one's said much very hopeful about it. But that doesn't stop me from praying for a complete cure. It has always been my policy to pray for what I actually want. While I was there, I tried not to dwell on the sickness, but just drank in every moment I got to spend with this wonderful man. But when the family gathered together to sing "God Bless the USA" before grace at our Fourth of July potluck, I know I wasn't the only one blinking back tears. It hurts so much to have him be this sick. Even though I didn't hear a single complaint out of him, I know he is really suffering.
The future is terribly uncertain, and we're always waiting for news, good or bad. Meanwhile, I rejoice in having gotten to see him, in my love for him, and in the kind of extraordinary man he is.
Posted by Sheila at 10:37 AM

He sounds like a wonderful, amazing man. I can see why so many people love him so much. I shall pray for him, Sheila.

Your Grandpa sounds fabulous. I can feel the love you have for him radiating from your words. That's just awesome.

Much love to you and to him.

Thanks for sharing this Sheila. I love the way you described him and all our love for him!