I do almost all of my shopping at Aldi. I really can't stand the store. It doesn't have a wide variety of things, so I have to make a separate trip to another store sometimes to buy a single item. Our local store is always filled with poorly behaved kids who run up and down the aisles smashing into things. And you have to bag your own groceries. I stink at bagging my own groceries. I always overload a bag and have the bottom rip out -- or don't bring enough bags -- or can't figure out how to get the cart back to the stand when I had to put the sleeping baby in his carseat in order to load the groceries into the car. The whole thing is a stressful experience, but I do it because it's cheap and we are very hungry people on a tight budget.

Anyway, I was in the store about two weeks ago. I was feeling very disorganized because I hadn't even brought a list, on the grounds that "I know what I buy, I'm here every two weeks and I always get the same things." Also because I was carrying a baby and trying to maneuver a cart at the same time. For a person who can't walk and chew gum, this is kind of a challenge.

I walked past the produce section and saw a sign that said "Iceberg lettuce" and the price per pound. I thought, "Hey, I think John would want that for sandwiches," so I reached into the box below the sign and grabbed one of the green spheres.

A day or two later, I was pottering around the kitchen and John was browsing in the fridge. "Why did you get a cabbage?" he asked.

"I didn't," I replied. "I got an iceberg lettuce; they look just the same."

"Even down to the label that says 'Cabbage'?"

Yeah, I had bought cabbage. I never buy cabbage. I generally buy carrots, peas, and corn for dinner vegetables, and lettuce, tomato, and green peppers for lunch vegetables. That's it. (I admit that I'm in a bit of a rut, but like I said, Aldi doesn't have a huge selection in the first place.)

"Um, I don't really know," John replied. "I guess it would depend on how you cooked it."

I spent a couple of days on research first. I searched online for cabbage recipes that sounded good. I picked two, each requiring half a cabbage, and waited for a day that needed a side dish. The trouble was, I couldn't really picture what either of the dishes would taste like. Cabbage is an odd vegetable; it tastes radically different depending on how you cook it. The only way I was sure I liked it was alongside corned beef, but I was going to try something new.

The first recipe was sweet and sour cabbage. It appealed by its easiness, and had my requirement of not needing any ingredients I didn't have in the house. (I was not going to spend more money when I'd already wasted some buying this unwanted cabbage!) It was very simple: cut the half cabbage into wedges, each wedge having some core. Brown the wedges in a small amount of olive oil. Add a cup of water and a tablespoon each of sugar and apple cider vinegar, and cook till soft. 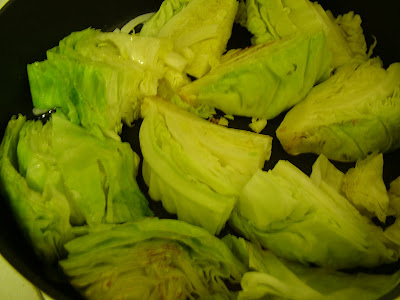 Before I cut into the cabbage, I peeled off the outmost leaf and tasted it. It was delicious! I'd forgotten that peppery bite that cabbage has. I remembered my mom's story of how she used to come home from school and sit reading The Joy of Cooking and munching on raw cabbage. I felt close to her as I ate my leaf.

The dish was as easy as it sounded, and I really enjoyed it. John, though, gave it an immediate thumbs down. I was so glad I hadn't cooked the whole cabbage that way! John ate his share like a trooper; I savored the rest.

The next dish was a cheesy cabbage casserole. I had to boil the cabbage in salted water (along with an onion, but I didn't have one) and pour a cheese sauce (just a bechamel with Colby cheese, but I used cheddar) over it. Then I put bread crumbs over the top and baked it.

This was more of a success. Anything with cheese is heaven to me, and John liked it too. It would have been better with the onions, though, and garlic would have been good too. I like things stronger!

Moral of the story? An accident at the grocery store might be a good thing after all! An unexpected vegetable might just be a bit of serendipity.

When John went to the store for me this past weekend (double husband points!), I had him pick up a cabbage.
Posted by Sheila at 7:48 AM

Great story! (Since I'm not a mother myself, I confess I get more out of your cooking posts.) I'd like to try those recipes. =) How long and at what temperature did you bake the cabbage casserole?

Fun and instructional story! I'm going to try to sweet and sour cabbage either today or tomorrow once I get some sugar. =) As for the casserole, how long and how hot did you bake it for?

Um, 350 degrees ... for like ... 15 minutes. But really, you just need to get the crumbs a little brown and you're good, because the cabbage was boiled in salted water till tender anyway. I didn't feel patient, so I have no idea what time that thing came out -- it was dinnertime, so I took it out and ate it!

Lol - this made me smile. We get a weekly veggie box and honestly, it has stretched me. And I'm so grateful for the internet!

Cabbage, broccoli, cauliflower, brussels sprouts... they're all basically mustard, heavily cultivated for various traits. Something to think about!

Mustard? Really? I knew they were related, but that I did not know.

I would love to get a weekly vegetable box and try new things! Aldi has such little selection veggie-wise. I miss how my mom would get extra vegetables from my grandparents' garden and we'd have a ton of spaghetti squash or something to do fun things with. (Squash soup and squash muffins, I found, are delicious.)

I love reading your kitchen adventures; keep it coming!

Unfortunately, I think raw cabbage doesn't agree with me. Baby and I both have had awful gas lately. :P So the last of my cabbage is going into sauerkraut -- hope that helps! I'll blog about it, in any event.