Nursing in Public: My experience


Welcome to the July 2010 Carnival of Nursing in Public

This post was written for inclusion in the Carnival of Nursing in Public hosted by Dionna and Paige at NursingFreedom.org. All week, July 5-9, we will be featuring articles and posts about nursing in public ("NIP"). See the bottom of this post for more information. 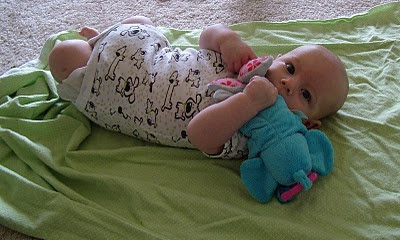 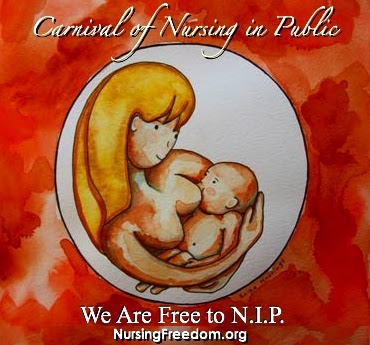 Welcome to the Carnival of Nursing in Public

Please join us all week, July 5-9, as we celebrate and support breastfeeding mothers. And visit NursingFreedom.org any time to connect with other breastfeeding supporters, learn more about your legal right to nurse in public, and read (and contribute!) articles about breastfeeding and N.I.P.

This post is just one of many being featured as part of the Carnival of Nursing in Public. Please visit our other writers each day of the Carnival. Click on the links below to see each day’s posts - new articles will be posted on the following days:
July 5 - Making Breastfeeding the Norm: Creating a Culture of Breastfeeding in a Hyper-Sexualized World
July 6 – Supporting Breastfeeding Mothers: the New, the Experienced, and the Mothers of More Than One Nursing Child
July 7 – Creating a Supportive Network: Your Stories and Celebrations of N.I.P.
July 8 – Breastfeeding: International and Religious Perspectives
July 9 – Your Legal Right to Nurse in Public, and How to Respond to Anyone Who Questions It

I don't think you are strange for wanting to cover up around one group, but not caring around another. My level of discretion definitely differs around different people. Even though I believe that a nursing mother should be able to breastfeed whenever/however she feels comfortable, *I* feel more comfortable being discreet around certain people. The only problem I have is when mothers feel like they don't have a choice in the matter - that they MUST cover up or move around certain people.

My best advice is to pay close attention for your own security, on how you nurse at home, when nobody is watching you. Unless you're just plain taking your shirt off, you're probably really not showing much, if anything. Maybe nurse in front of a mirror. Try to remember that with your head perched on top of your neck, YOU are going to see far, far more than anyone else, even people sitting right next to you!

You might just ask your friends how they feel about it. Honestly, when it was me, I had a moment of extreme concern about how one of my dh's friends felt about me nursing when he came over. Then I had an epiphany: This is MY house! I'm not going to feel obligated to go hide IN MY OWN HOME because someone else has silly "sensibilities". Amazingly, he got over it. It made him uncomfortable at first until I pointed out to him that God gave women their breasts *to feed their children*. If seeing me use them for that purpose bothered him, he was welcome to step outside until I was done. The home is mine and my childs. If I can't nurse comfortably there, I'll never be able to nurse comfortably *anywhere*.

Nursing in public is a wonderful thing and I have to agree with your sentiments about covering up. It's a real chore and attracts way more unwanted attention than not using one at all. Take it from me: I have very, very large breasts and I manage to nurse without flashing the world (most of the time :p). I would either use a button-down shirt (which you can open a up from the bottom and use half of it to "cover" any part of your breast the baby isn't) or a big t-shirt. I'd just pull the shirt up until babe was latched and then pull the shirt back down over my breast until it was right by baby's nose. Worked like a charm!


But seriously, practice at home until you are comfortable about what you are and are not showing. Being gracious about other people's sensibilities is perfectly fine but taking it to a point where you are handicapping yourself when you don't even really have anything to be concerned about isn't fair to you! And yes, you matter! It's ok to expect them to be gracious about the fact that you need to feed your baby. They are grown ups, I'm sure they can be reasonable about it.

This post almost describes me! When I NIP, I usually use a cover, or nurse on my Moby. I feel a bit uncomfortable at times, especially around men. I really loved your comment about your husband having a say in how much of his wife is exposed, I agree completely. If you want to cover up, but not with a blanket, you could buy or make a nursing cover. Get one that has boning in it so there's a little window to your baby. I like having a cover, but I sometimes take it off after latching since it's so hot! When I wear a nursing tank (they're cheap at Target and Walmart), it is much easier to be discrete. People come up to see the baby not realizing that she's nursing. I've also heard that ring slings are really nice to nurse in esp. in public. Good luck to you and thanks for sharing your story!

Rebeka: I actually did "man up" and ask two of my closest male friends if they minded. I was about to nurse and everyone was falling all over themselves trying to hand me a blanket or offer their chair. I just said, "I'm only covering up for you guys; for myself, I really couldn't care less." There was a sound of relieved laughter, and the guys both said that they were only worried about my comfort and they didn't care what I did.

And yet -- they still kept handing me the blanket. So I draped it around the baby, but without smothering his face. (It is HOT under there!) I just still feel kind of unsure about their comfort level, since they SAID they didn't mind but still ACTED as if they were uncomfortable. *shrug*

I need to learn to nurse in a sling; I still haven't figured it out. It would be really handy, because I love to babywear but hate having to take him out every time I want to nurse him!

Sheila, the two shirts method was the only one that ever worked for me (well, a nursing tank would have been good, too, if I'd ever decided to put out for one).

Also, don't be too bummed by the prospect of nursing alone in a dark room. Pretty soon, even your quiet and familiar house will be sooooo interesting to that smart little guy, that he won't be able to concentrate on nursing anyplace, anytime, anyhow. Argh! It is an awful stage, with lots of dark bedroom nursing, but then everyone adapts and you can go back into the living room. :)

I find for a baby that unlatches suddenly the best thing is a plain old baggy t-shirt (or any baggy shirt).

Unhook nursing bra under your shirt before you lift it (or pull up your bra or whatever it is you do). Position the baby in a nursing position, pull up the shirt as little as possible and latch them on.

Just let the shirt fall unless it bothers baby or is so baggy its covering their face. Then when they pull off, there's nothing holding your shirt up and it falls over your breast without any help from you. It may not go all the way back to normal but it will normally cover the bread PDQ.

I did the same thing, ages ago. If you want to continue nursing with a blanket, find a nursing cover or make one. You need a lightweight piece of fabric, some boning for the top end so you can see baby, and a strip of fabric to make a strap to go around your neck. They're really easy to make and not hard to find at all. I nurse my 2 year old every week at Mass and we use the nursing cover. It sounds odd, but I have DS trained to pull out the cover when he wants to nurse at church. He pulls it over my head, ducks his head under it and I give him my breast. It works well for us because he knows what to do. There will be times when they fuss to much and refuse to use the cover...that's when I'd go to the back of the church or a corner and face the wall.
I learned how to nurse in a sling from a LLL leader. If you only go to one LLL meeting to learn to nurse in a sling, it's totally worth it!
I completely understand where you come from though with wanting to cover up. I'm more apt to cover up in front of DH's guy friends, hit and miss if my family is around and will probably never cover up around my in-laws again. In fact, the only time I had to leave the room when I was nursing around my in-laws was during DS's distracted phase where he wouldn't nurse in front of people and we had to go somewhere quiet with no people for him to look at.

Thanks for all the advice, people!

I really HAVE to learn to nurse in a sling. I'm going to be teaching a class next year and I would love to be able to nurse without the kids knowing I was doing it. (Is it even possible to be that savvy?)

Yesterday I tried to nurse with a blanket in Mass and I truly was the example for "why not to nurse in Mass." People were standing directly behind me, so I knew they could see everything I could see. Only I couldn't latch him on without being able to see. He was latching onto the blanket, onto his hand, onto my shirt, and so forth. Every time I finally got him on for 2 seconds, a bell would ring or the organ would play or we'd have a response and he would jerk off and try to find where the noise was coming from. By the time I gave up on fighting with him and took him out, he was too upset to nurse. (He reaches that stage incredibly quickly, unfortunately.) So I had to just rock him and rock him and rock him to get him to calm down enough to go in at Communion time. So frustrating! Hope this stage passes.

Hey Sheila!
I lurk in the blogosphere these days and you're on the list of blogs I read. I've got one of my own too, I'm just bad at updating...
Anyway, I saw a notice in the female latrine of our div. HQ with a notice posted for four nursing rooms on base. I was kind of impressed that they'd thought of that at all. I have no problem with moms nursing when/where the kids get hungry, but I think it's nice that they have the option of a quiet space if you need/want it.
Random thing of the day.
Sarah (the one in the Navy ;))

Oh, that is nice to hear! Hope you're doing well, Sarah.