Last night, I read through all my old New Year posts.  (And gave them a label, because I do this every year and it's a bit of a hassle finding them.)  The "word" thing has definitely worked well for me.  It gives me the sense that I'm working on something, even though it seems so often that I'm standing still.

Last year the word was "me."  I didn't tell y'all that because I was embarrassed -- it felt self-absorbed.  It had a dual meaning.  First, I need to take care of myself and not feel guilty for making "me" a priority from time to time.  Which I did: I went to the dentist and got five cavities drilled; I got glassses; I paid real money for a real haircut.  Twice!  And I allowed myself to actually insist on a little of my own time to submit my novel and work on the next one.  It helped immensely that John has been supportive.  I really don't think I could do it if he gave me the slightest sense, ever, that I was shirking my real job by writing.  Instead he believes I will actually get published and so it IS real work.  And that I shouldn't give up the work I want to do for something with a shorter-term reward.

The second meaning of "me" is that I should be less embarrassed to be myself.  I realized that I have been making myself vanilla for years--really, since boarding school--for fear of being rejected for being different.  And I never got rejected, but I found it hard to make friends.  I realized that people had a hard time figuring out what I was all about because I was too inoffensive.  Appearance: bland.  Conversation topics: the weather, funny anecdotes.  I almost never got John's attention because of this; he says what made the real difference was when after a whole year of knowing each other, I finally got steamed up enough about something to vehemently state my opinion.  (It was that NFP is overused, ha ha haaaa.)  He liked that because it showed I had some ... "intellectual sharpness," I think he called it.

Anyway the idea was to do more of that kind of thing.  Try to bat signal the people who might like me, even at the risk that people might be turned off by me.  I don't mean online--internet expression takes so much less courage, and I think I need to work on not doing it too much.  But real, in-person courage.  Dyeing my hair blue was the main way I did that.

And it worked!  Lots of people who would have normally ignored me started giving me compliments.  I had many people say "oh, blue hair! I've always wanted to try purple/green/pink."  A lady at school said that and then actually did it!  I was really proud of her.  I don't know if it helped any, but I've made some friends this year.  My across-the-street neighbor and I talk now, and our kids play.  That's the only in-person one, but I made a lot of online friends.

Some unexpected things happened this year.  The biggest one was working to reform my alma mater and then, when it proved resistant to any kind of reform, working for this advocacy organization.  I didn't do a whole lot, thanks to being overwhelmed all the time, but I tried.

Because of that, I got threatened to be outed as an atheist by a fellow alum.  It freaked me out for about three days and then I called his bluff and told people anyway.  Because you know what?  I don't need friends whose friendship was conditional on me being someone I am not in real life.  Letting go of the fear of rejection from my Catholic friends has been a goal for me for years, and in the end I had to get forced into facing it.  So, thanks?

Of course being ex-Catholic is suddenly a lot trendier all of a sudden, because of the scandals.  There are a lot of people walking away.   And the kind of liberal Catholics I hang out with these days are really understanding of that because they've been tempted to do the same.  Now, I didn't actually leave because of scandals -- if I still thought it was all true, I'd probably be suffering through it to this day -- but scandals do seem like additional evidence that the chain of trust that brings us all those doctrines is not reliable.  Anyway the company is nice.

John has started going to an Orthodox church.  I have mixed feelings about this.  I like that he found a place where he is happy -- and boy is he happy about it.  He's obsessed with reading books, watching sermons, joining Facebook groups.  And that makes me feel suspicious, because getting too into religion was so very bad for me.  I also feel a little funny about the kids getting into it.  While I think some exposure to religion is good, I wasn't expecting them to swallow it all so eagerly.  I should probably write a whole post about that.

He also started getting mental health treatment: a bipolar diagnosis, meds, and therapy.  It's a process, but he's definitely feeling a lot better than he was.  He did well at work this year, but his beloved boss quit, so he's lost some job satisfaction on that front.  Discouragingly, there just aren't a lot of jobs that fit his career path around here.  But the thought of ever moving is .... not appealing.

Overall this year continues the slog upward from the low point that was 2016.  Jackie is still super difficult -- she nurses as much as ever, stays up late as ever, screams quite a lot.  But she plays with the big kids more and definitely screams less as she slowly stops needing the naps it's so difficult to get her to take.  Most importantly, she's developing a ton of personality, so I feel a lot more bonded to her now.  Miriam is getting increasingly bored at home, which probably means she's ready for school.  Michael still complains a lot about school, but he very suddenly started reading recently, so that's good.  And Marko has been doing very well.  He reads a lot and loves school more than ever.  Occasionally he goes on a kick for a week or two where he is as annoying as possible to everyone; I wish I knew what that was all about.  But he's mainly doing very well.

My writing, editing, and submitting are all going great.  I don't have as much time to spend on them as I'd like, but I have some and I'm using it well.

The first step of conventional publishing is to query a literary agent.  You send a letter to the agent with a blurb describing what your story is about, and often some number of pages as well.  I've sent out over a hundred, which was my goal for the year.  And I've had seventy-two lovely rejections, mostly form letters.  But I did get a couple encouraging ones saying they liked it.  One even gave me some tips for revising, which I took.  I also ditched my prologue, which stung, but I got more positive responses after that.  When you've got five pages to impress someone in, you don't want to blow one on prologue. 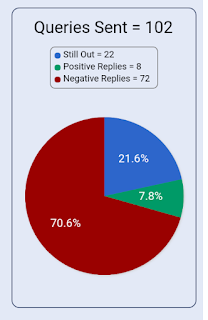 But I did get eight positive replies, meaning they asked for more pages or the whole manuscript.  Four of them read it and wrote back that they weren't interested after all, and four are still reading it.  I wish I knew how long it would take.  I'm not submitting any more at present, because I want to give them a chance to read it, but I will probably get back to it soon if I don't hear anything. 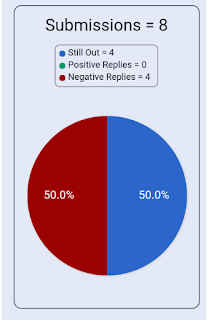 This is the achievement I'm proudest of this year!  Even if I don't publish this book, I now know how to navigate the query process and have overcome my fear of letting people read my stuff.  It will probably be at least six months before the alien story is ready to query, but I will do that too, and with a lot less trepidation.

So, what about next year?  I tried to think of a word but drew a total blank for awhile.  Then I thought of a day I had last week.  I had talked to a friend, who told me, "You still seem very overwhelmed, and really anxious."  Which was more shattering than maybe it should have been.  My focus has been really heavily on, "but I'm doing so much better!"  And I am.  But I'm still just getting by in a lot of ways.  And anxiety?  Well, that same day I lost a lot of sleep thinking about ever moving from our house.  The very thought that anything could ever change made me panic.  I don't like that about myself.  I used to be so fearless, so excited for change!  Now our life feels like a very precarious balance that can be totally derailed by almost anything.

Partly it's true, because a family of six people is a complicated machine.  But partly I'm still traumatized by 2016.  I feel like any change is guaranteed to be for the worse.  And moving?  Our move was a horrible experience that, years later, makes me never want to do it again.  I feel like I got changed somehow, from a free spirit who was willing to set out to whole new cities without fear, to somebody huddling under the bed hoping that nothing will ever change.  Even though there is a lot that's uncomfortable about my life!  This town isn't exactly ideal for me and we don't have enough money.  A move might be good, but I'm just too scared.

So of course after thinking of all this the word "brave" popped into my head.  I don't like that word.  I want to pick something else.  But I think it's occurring to me for a reason, which is that I am not really happy huddling under the bed.  "Brave" is going to mean working on my anxiety, which is better but still a problem.  Maybe facing new things, whether a move or a new job or something smaller.  I've been way braver this year in a lot of ways, from daring to take the kids places to calling strangers on the phone -- I want to do more of that. 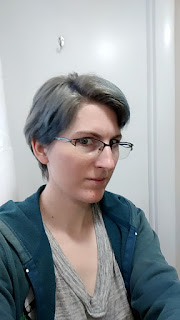