I haven't read Marie Kondo's book, The Life-Changing Magic of Tidying Up.  And I only watched one episode of her show before deciding it was too much human conflict and not enough relaxing shots of people folding things.  But it's a cultural phenomenon, and we all have to have an opinion on it now, so here goes.

I don't like to fold things.  And if I got rid of all the things that don't spark joy, I'd have no daytime pants.  Some of the quotes I've read seem a little inapplicable if you don't have disposable income, like "you can just buy another one if you realize you did need it."  But I don't want to just come out against her because there's one thing she's teaching that's really important, not just for tidying up, but for everything.

THERE IS NOTHING MAGICAL ABOUT THE STATUS QUO.

That is why you take all your stuff out of your closets and examine it as if it weren't your stuff.  Instead of thinking "do I have to get rid of this?" you can think, "would I buy it again?"  Our brains have a giant bias toward the status quo.  Plenty of things which we wouldn't bother to buy, we act like we need because we already have them.

In Thinking Fast and Slow (a book everyone should read), they did an experiment where they gave some people coffee mugs and some people pens, and then gave them the option to trade the gift they got.  Almost everyone chose to keep the thing they already had, not because it was better, but because they saw it as giving up something they already had, and they were already attached to it.

All over the internet, people are applying this wisdom to everything.  What if we looked at our lifestyle, relationships, political systems, and hobbies, not with the bias toward keeping everything the same, but with the attitude that it has to offer something of value to be kept? 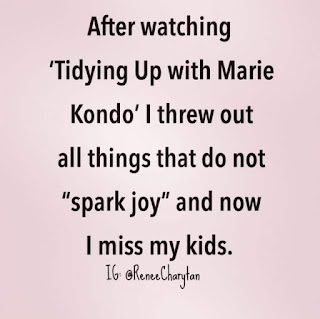 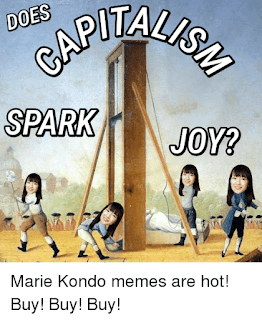 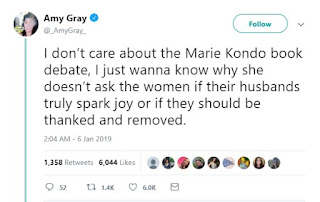 This is, incidentally, how my husband got me out of Regnum Christi.  I was obsessing over whether I was unhappy enough to leave.  Instead, he asked, "If you were considering joining it now, would you?"  Well, obviously not.  So I threw it out of my life and that sparked so much joy.

I'm never going to be a KonMari junkie, because like 90% of my stuff does spark joy and the other 10%, I can't afford to replace.  But I did help Miriam KonMari her clothes, and years ago I did my underwear drawer, and it gives you this feeling of lightness to dig down to the stuff you never look at and get it out of your house.

And I feel the same lightness is available when you get rid of an intangible thing: that person you follow on Twitter but who only makes you angry; the time you spend on a website because it's a habit even though it's not much fun; the need to lose weight; the obligation to homeschool or make everything from scratch; the rent-free space a person you dislike is taking up in your head.  You don't have to hate them to get rid of them!  You can just decide they don't add anything, thank them for the good they did you back when they were new, and take them to the curb.  It's okay.  You don't owe anything to the status quo.  You can let it go.

This is probably a silly question.

Can one become attached to detachment? i.e. getting joy of the act of purging for "its own sake"

I think my mom had a bit of this, where she would go on massive purges around the house, and I would later discover some of my favorite toys had vanished without warning.

Did I really need to hang on to those toys? Probably not. Would I have enjoyed passing on my super-awesome-rare-unique-box-full-o'-legos to my kids someday? Definitely. And then again, I really hate stepping on all the legos....

Yeah, I think some people get a little too chuck-happy. Marie Kondo says each person should only declutter their *own* things because you can't say what might spark joy to another person. I should remind my husband of that. He's always throwing out my chicken carcasses (I could have made stock!) or the kids' shredded stuffies because they don't have any value to *him.*