7 things to be aware of this Autism Awareness Month

So, April is autism awareness month.  I imagine everyone is pretty well aware by now that autism exists.  But there is still a lot of knowledge that people aren't aware of, so I thought I'd put together a post of things I wish people knew.

1.  Autism is a spectrum.  What that means is that there is a wide variety in how severe people's delays are -- and even what delays they have!  This is even more true today than it used to be, since Asperger's was redefined as a subtype of autism.  If you know an autistic person, try not to make assumptions of what all autistic people are like based on that one person.  Some autistic people can speak, for instance, while others can't.  Some have excellent fine motor skills, while fine motor skills are Marko's biggest struggle -- he can barely write at all.  Because of all this, there's no secret to dealing with autistic people in general, except perhaps to be patient and adaptable while you find out how that particular person can communicate with you the best.

2.  Autistic people grow and change over time.  I was reluctant for a long time to admit Marko had autism because I thought it meant he'd never grow out of the behaviors we were struggling with at the time.  I didn't want to give up hope that it was just a phase.  And you know what?  It was autism and it was a phase.  Autistic children may reach some milestones later than other kids, but it doesn't mean they will never reach them.  Some autistic people finally grasp a key concept or skill in their twenties or thirties that opens whole new opportunities for them.  An autistic person will always be autistic, but with patience and hard work, they can achieve things others thought they never could.  A child who was completely nonverbal till five or six might grow up able to live independently and start her own business at thirty.  So never assume what someone's going to achieve based on what they're able to do now.  And never, ever assume an autistic adult -- even one with very obvious delays -- is like a giant child.  Adults, regardless of disability, are still adults.

3.  Autism can coexist with high, low, or average intelligence.  It's wrong to assume that autistic people are retarded or dumb simply because they are struggling in specific areas -- they might be perfectly intelligent and simply have trouble communicating their thoughts to you.  On the other hand, it's also wrong to assume that all autistic people are super-geniuses like in the movies.  It's very difficult to test an autistic child's IQ at all because of this.  Marko tested at 104, but we were told this result was completely invalid because his vocabulary was so high and his scores on a shape-rotation test were so low.  Is he a genius or not?  Well, does it really matter?  Like the rest of us, he has strengths and weaknesses.  And it's best never to assume based on a person's performance in school or on an IQ test -- those may or may not assess the person's strongest skills.

4.  Autism isn't an epidemic, and it isn't caused by vaccines.  Diagnostic criteria have expanded hugely over the years, so more and more kids qualify for a diagnosis, but that doesn't mean more kids have a disability than before.  What it means is that more children who before were labeled "difficult," "disorganized," or "retarded" are now able to access specific help for autism.  I wrote about the vaccine-autism thing before.  Suffice it to say that Marko had autism before he got a single vaccine.  He inherited his autism from his dad and me, who were carrying the genes for it.  If we really wanted to prevent autism, I suppose we should prevent nerds from dating each  other . . . but what kind of terrible world would that be?

5.  Autism Speaks is controversial, and a lot of autistic people don't like it.  I heard it compared to an organization called "Women Speak" which was run by a board made up of only men.  Because they're not letting autistic people advocate for themselves, they've blundered into some really offensive statements, and the money donated doesn't necessarily go to support autistic people.  A better charity is the Autistic Self-Advocacy Network.

6.  Another controversy is what sort of therapy is best for autistic kids.  Some people insist ABA (Applied Behavior Analysis) is absolutely essential, while many autistic adults say it was traumatic and unhelpful for them.  The real question is, should the goal of therapy be to extinguish all external signs of autism -- training kids to stop any behaviors the rest of us find annoying, such as fidgeting -- or to help the child overcome any barriers between him and his own goals?  This is extra difficult when a child can't communicate what his goals even are.  As a parent trying to navigate this with my child, there's a lot of listening and empathy required . . . and sometimes some tears, either mine or Marko's, as he struggles with something that's difficult for him.  The important thing, as I see it, is to equip him for his own life -- trying to give him all the tools he'll need to graduate school, live independently, and achieve any dreams he has.  If he does all this while remaining quirky and obsessed with fantasy . . . all the better.  That's part of who he is.

7.  My kid isn't badly behaved, and he's not defective.  He's dealing with bigger feelings than the average kid, with less emotional regulation, and he's doing pretty well.  He's got lots of talents and a ton to offer the world -- not that his worth would be any less if he didn't.  Sometimes I worry that people will look at our family and think I'm too permissive, that I need to somehow make my kid look like their mental image of how a kid his age should be acting.  But more often than not, people take the time to engage with him, to listen to his obsessions, and to make an effort to enter his world.  And I love every single person who does it.  I know they have to put a little extra work into getting to know him, but they are rewarded with a chance to know a sweet, quirky, intense kid.  Getting to know autistic people is always worth it, just like being the mother of an autistic child is worth it.  I wouldn't trade him in or send him back.  I love the trip he's taking me on, and every person who joins us for the ride is very welcome. 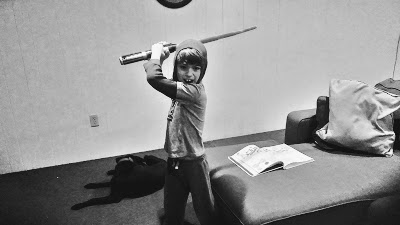