It's been awhile since I've done one of these, so why not?

Spring is being disappointingly slow to arrive.  We'll get a nice day or two and think this is finally it, but nope, high winds, freezing temperatures, or pouring rain come back the next day.  Oddly the plants don't seem to be held back from it--the pears blossomed and now have leaves, there's a green haze on all the underbrush, and the cherries and redbuds are looking good now.

Because we can't go outside. 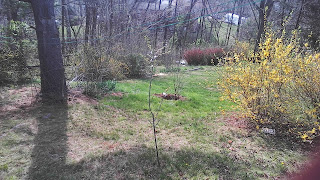 My peas have sprouted and I planted broccoli seedlings, but everything else is still biding its time.

Both boys have had their birthdays.  Marko is EIGHT and Michael is SIX, can you believe it?  Marko pointed out that it doesn't make any difference to him, because he feels exactly the same.  Michael is jumping out of his skin with joy because he finally has a day that's about him. 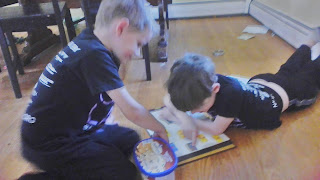 I tried to have a party for them, because I've never actually hosted a children's party.  First I was going to invite all the boys from both their classes, but that seemed like way too many.  So I invited all their outside-of-school friends, but only one came.  If I'd known the refusal rate would be so low, I'd have gone ahead and invited 30 kids!

Then again, I had a stressful day that day so that by the time the party came around, I hadn't had any time to clean and I didn't really want to socialize much, so it wound up being perfect.  I chatted with my one friend and my kids treated their one friend like a celebrity.

I'm still submitting my book from NaNoWriMo.  It's quite a process.  You can't just send the whole manuscript to a publisher.  No, you have to obtain an agent first.  And you can't send them the manuscript either.  You send them a query letter and sometimes a few sample pages.  So I've been doing that.  I've had 20 rejections, all form letters.  But!  I've also had two of them request the whole thing, and one request 50 more pages.

That's very heartening to me.  Sure, more are rejecting it than requesting it.  But it's actually getting into the hands of some agents!  And I'm really hoping they get into it and realize it's super exciting and interesting.  Then they'll email me begging to represent me.

I keep reminding myself that maybe I'll just get more rejections, and those will hurt more because I'll know they've read the whole thing.  If that happens, I can't let that stop me.  I have to revise and keep submitting.  And, worst case, just move to submitting the next thing.  Because I've made up my mind that I am going to get published and I just have to keep trying.  And now is the time to do it.  I've waited, and waited, and practiced with book after book, but at this point, I feel that I'm ready to be published.  Or rather, to start the lengthy process of getting published.

Meanwhile I've started messing around with another story.  It's called (so far) The Witches of Salem College.  I know I had a lot of other exciting stuff on my "to write" list, but my attention span and time to write is still limited, so I figured I'd stick with YA at present.  Imagine Buffy and Harry Potter mixed together.  It's a paranormal story on the campus of a tiny liberal-arts college.  So there's normal college woes, but also fighting vampires and werewolves and stuff.

Except, not.  Because vampires and werewolves are both kind of overdone.  So my idea was to use paranormal creatures from Hispanic legend, because one of my main characters is Mexican.  But the research has been harder than I expected.  So far all I've got is the Tlahuelpuchi, which is basically a vampire, and the Nahual, which is suspiciously similar to a werewolf.  Apparently there are some motifs that are just so popular you can't get away from them.  OH WELL.

Miriam remains delightful.  She's oh so girly, and I am trying not to get in the way of that even though I dislike pink and makeup and so on.  She wants pink nail polish, and pink earrings, and pink everything.  Then again, she also wants a pink toy chainsaw and a pink dump truck.  When she grows up, she and Jackie are going to be "girl 'lectricians" and climb on pink ladders to fix wires that are broken.  So it's not like she's absorbing any toxic ideas about being a princess who exists solely to be beautiful.  She wants to be beautiful and badass.  And there's nothing the matter with that! 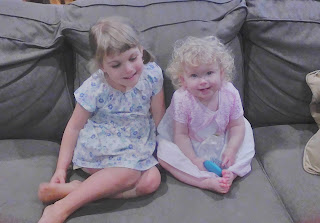 She's so incredibly sweet though.  She's always telling me I'm the best mama ever, that she loves me so much she can't ever stop loving me, that she wants to hug me forever and ever, that she loves her sister more than anything, and so on.  If we have a grown-up friend over, she asks me, "Is it a he friend or a her friend?"  If it's a "her friend," Miriam loves that person before they've even met.  She'll monopolize my friend the entire time, prattling on about whatever is on her mind.  And then for weeks after, it's "where is your her-friend?  You should invite her over again."  One time she saw a lady with a beautiful dress at school pickup, and she said that we should invite that lady to be part of our family.  I was like ... I don't even know who that person is!  Haha.  And to think the first time we visited school, she hid behind me and got upset if the office ladies talked to her!

She is dying to go to preschool next year.  We didn't really have any plan to do that, but since she's so interested, I'm looking into it.  What I'd love is a program that was one afternoon a week, or something.  Just a little break from her constant demands for attention for me, and a chance to meet other kids her age and play with new toys for her.  But we'll have to see what there is, and what it costs.

Jackie is fifteen months now and very, very charming.  She still doesn't talk much, but she communicates excellently.  That is, she can say "Mama" and "yes" [ssss] and occasionally Miriam [Meemaw], but most of her communication is with gestures and pointing.  She can sign water, more, and all done, and she nods and shakes her head.

She's napping later and later in the day, which is screwing with her bedtime more and more.  I foresee there aren't more than a few months of napping left in her future.  Which is fine, really.  Her needing a nap is a big monkey wrench in our day, because if we go anywhere early in the day, she falls asleep on the way home and wakes up when we get there, but if we wait for her to nap first, she won't nap till one or two p.m. and then we don't have time to go anywhere before it's time to pick up the boys.

But while she does nap, I'm going to enjoy it.  Yesterday Miriam was watching a show while Jackie napped, and when Jackie woke up crying, I went up and lay down with her.  Jackie and I both fell back asleep and didn't wake up for another hour.  Bliss!  And Miriam, when she got tired of watching her show, just quietly crept up and didn't come in till I told her it was okay.  She's actually old enough to be quiet during a nap!  Space your kids, cats and kittens. 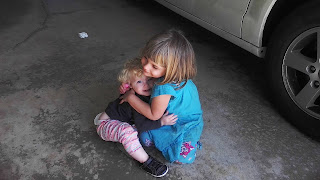 It's been about three months since Christendom's scandal broke, and so far they have .... hired some lawyers and a new VP.  What we said they should do was stuff like hire a full-time nurse who could do rape exams, partner with a local nonprofit to do awareness training for the students, and post flyers around campus.  But they haven't done that.  And I can't understand it, because that would be a lot cheaper than what they're doing.

Meanwhile Steubenville has had a similar scandal break.  The big difference here is that Steubenville does (at least in theory) comply with Title IX, so people are taking it as proof that Title IX is worthless.  Well, I don't think it's worthless, but it certainly isn't sufficient.  The next step for a college would be to actually follow Title IX instead of just saying they do.

But really, I think the most important thing is for people to be aware that rape happens everywhere -- that Catholic colleges aren't a perfect world where nothing that bad could possibly happen.  I certainly thought that back when I was there.  I never spent a single moment considering my own safety when I was with Christendom guys.  Outsiders, sure, but I assumed anyone who had chosen Christendom was a good person.  Now, I think people are more aware.  Hopefully more parents will talk to their children before they head off to a Catholic college -- about things like risk awareness, consent, and reporting.  They can't trust the college to mention it, and they can't assume it's not going to happen because it's a Catholic campus.

How have you all been?
Posted by Sheila at 3:30 PM

1. In the meantime, it's sweltering here. When I go outdoors, I can barely think clearly; it's so hot!

2. That's disappointing about the refusal rate, but the boys themselves don't seem to have been let down. And I know what you mean about only having one adult friend there being perfect! Good luck for next year, though!

3. I'm excited for you! When you get published, I'll definitely buy your book!

4. This might not be helpful, but since you mentioned Harry Potter . . . I've been reading a lot of HP Fan Fiction these days, and I really love the stories that "reveal" more of the Hogwarts school experience. From Rowling's novels, I know what it's like to be one of the Golden Trio; but it's from the FF that I also see what it might have been like to be one of the ordinary students. And I'm sure that if I were to rewatch Buffy today, I'd wonder how all the heroics affected the Scooby Gang's schoolwork. I'm sure an unusual insight or two creeped into an essay.

5. How did Miriam come to love pink? Was she drawn to it on her own, or did she notice that a lot of girly stuff is pink?

6. Jackie definitely looks charming! All those curls! But I like Miriam's straight hair a lot, too.

I think Miriam noticed that a lot of her clothes are pink. Since she wears mostly handmedowns, there was no helping that. Also the boys do not like pink, so she wound up with the pink version of a lot of things by default.

I seem to remember that three is an age where children notice gender and start to pattern themselves after same-sex adults and peers. And that's certainly true of Miriam. She's always divvying the family up into girls and boys, gushing over all my women friends ("are you having a SHE friend come over?! I LOVE friends who are hers!"), and sometimes being a little confused about what connects to gender ("when will I grow into a boy?") She was terrified of going to the dentist when I mentioned it the other day, but then I said the dentist is a "her" and she was fine about it. It's an amusing stage. I don't remember the boys being that aware, but then, they didn't have many girl peers.