We interrupt your regularly-scheduled natter about nothing for an exciting announcement couched in a very long story.

Way back when I was in college, I used to get headaches a lot.  I've had them from time to time since high school, and when I'm tired and under a lot of stress, I sometimes get bad ones every single day.  No fun.

I talked to my friend's mom, who knows a lot about nutrition, and she said I was probably deficient in magnesium.  So I went to the health food store, bought some capsules, and took them reliably for about a month.  Then the headaches went away and I stopped taking them (of course!).  Eventually I lost the bottle.

A couple of years later, when I was pregnant with Marko, I started noticing bad headaches again.  I also had a muscle twitch around my eye which was driving me crazy.  So I thought, "Aren't tics sometimes a sign of magnesium deficiency?  I'd better stop forgetting to take my prenatal vitamins."

And I did, but it didn't help.  I took them religiously for the rest of the pregnancy and some time after, but it wasn't till months later that I actually read the bottle and found there was no magnesium in those vitamins.  That baffled me.  I thought vitamins had everything you needed in them.  How disappointing.

So I plugged along, with my twitchy eye reappearing from time to time, the occasional bad headache, and now constipation as well.  I knew I should probably be getting more magnesium, but wouldn't that mean actually going to the store and buying some?  With money?  Yeah, between my laziness and stinginess, I didn't do it.

At some point I read this post and really got convinced.  Apparently at least half of Americans aren't getting the recommended amount.  It's in things like leafy greens and dried beans, but there isn't any one food that has a lot of magnesium.  Some people also don't absorb it very well.  A good sign that you are magnesium deficient is an intense, intense craving for chocolate.  And I had that for sure!

Then I got pregnant with Michael.  Just as with Marko, I had some headaches, some eye twitches, some leg cramps, some sleeplessness.  And I had even more Braxton-Hicks contractions than with Marko, which is saying something.  Even though I drank more water and wasn't on my feet a whole lot, I was having really severe contractions even at 22 weeks.  It made me very nervous.

So I did some googling, and what did I find but that magnesium deficiency also causes Braxton-Hicks contractions AND preterm labor!  Delightful.  So I finally ran out to the store and bought some.

It helped so much.  Not only did the contractions disappear almost completely, but I slept better, had no eye twitches and few headaches, and even my back felt less sore.  Who knew?  I spent the rest of the pregnancy trying to stop myself from painting sheds and planting the garden in February.  Instead of dragging myself around like when I was pregnant with Marko, I was baking huge batches of food and scrubbing floors.  And oddly, I suddenly felt like chocolate was nice, but not as nice as other things.  I could take it or leave it.  Huh.

Since magnesium is used to relax your muscles (calcium is used when you tense them), I was told it would make labor easier.  And boy did it.  Three hours, start to finish, and at no time did it feel like more than I could handle.

But just after Michael was born, I ran out and didn't buy more.  And when he was about a month old, he started getting very constipated.  First he pooped every day ... then every other day ... then once a week, and with difficulty.

The trouble is, babies can't take capsules.  The solution is to get magnesium on their skin.  You can put magnesium salts in a bath, but that's rather a hassle, and you can dissolve them in water and put it on their skin, but it can sting.  So I had the idea of putting it in lotion.  It's a bit of a process, but I make a big batch at once and divvy it up into jars.  The base is coconut oil, with the magnesium water emulsified into it.  I use beeswax as an emulsifier, because "real" emulsfying wax isn't at all natural.  Since it's meant for a baby's skin, I figured if it separated a bit, that was better than putting harsh ingredients on Michael.  I made it dilute enough that it doesn't sting him at all.  I also added a few drops of lavender essential oil for a nice relaxing scent.

Did it work?  Amazingly well.  It cured the constipation within a week, and he does sleep better with it as well.  I put it on once a day, before bed, but it's fine to put it on more often too.  Marko seems to sleep better when I've put it on him as well.

So I decided to open an Etsy store and offer this stuff for sale.  To my knowledge, there's nothing like this available anywhere.  I did find one magnesium lotion, but it had a ton of ingredients and not a lot of magnesium.  My lotion has only five ingredients, and since it's not expensive to make, I priced it pretty low.  It seems an easy way to try and find out if a baby's -- or an adult's -- problems could be helped by magnesium.

Obviously most of those have other causes too.  But if you have some of those symptoms, why not check out my store and buy a jar of Calming Salve?  It can't hurt, it smells nice, and if it helps you, it's easy to keep it as part of your routine. 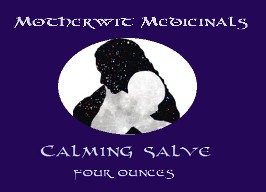 And, of course, you'd be helping a stay-at-home mom make a couple of bucks.  It's never going to be a full-time job for me, but it means a lot to me to make a little money of my own.

Pretty soon I'll be adding a few more items to the store.  I'll let you know here when that happens!
Posted by Sheila at 1:36 PM

You've got fans! This post just went up a short while ago and your Etsy stock is sold out! =D

Actually it says I have two more jars left. :D I should be able to list more in the next couple of days -- just have to get the labels printed.

Are you sure it's not just a placebo effect?

Cojuanco, it really isn't sensible to ask whether an anecdote in the category of "improvement followed treatment" is an instance of placebo. Placebo is one kind of control model used in clinical effectiveness studies; the idea being to compare a treatment using some hypothetical mechanism vs. simulated treatment, having no expected mechanism for improvement. In the present anecdote (not a clinical trial) we have (1) a known useful substance (2) being applied such that a suspected mechanism should engage (3) which was followed by improvement of the intended sort.

While it is true that any particular instance of improvement in symptoms may be caused by hidden mechanisms (acquired immunity to some unkown infection? Miraculous intercession?) the role of magnesium in biochemistry and the availability of it in local diet are points which may be researched laterally; if anyone has misrepresented these points here, kindly provide reputable references for such.

Otherwise, quit feeding my trollish self!

I am thinking the balm might be useful for the grown-up variety as well (?)

Belfry Bat, you said it better than I could have. Magnesium DOES have these effects, so it's no surprise that I should experience them. On the other hand, if placebo makes Michael sleep almost through the whole night instead of being up every hour -- I WILL TAKE IT. Whatever works!