I have always been a tree-hugger.  As in, literally, I like hugging trees.  I think they're snuggly.  When I was a kid, my best friend was a holly tree.  It was actually more like a 50-foot bush ... it had six trunks and was taller than our house.  Once you got inside the prickly canopy of spiny leaves, it wasn't thorny at all, and I even built a treehouse inside.  That tree taught me that plants can be male and female (ours was male; his girlfriend next door bore all the berries) and that they all have flowers, even if those aren't always obvious. 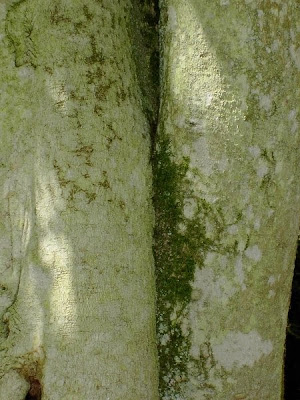 But I have been frustrated for years that I can recognize so few trees.  Sure, I know maples, oaks, and hemlocks, but beyond that I can barely even guess.  Here in Virginia it's even worse, because there are so many trees here I'd never even seen before.

And once I see a tree I want to know more about, it's very difficult to do anything about it.  You can google a tree's name and get pictures of it, but how can you google a leaf if you don't know the name?  Most tree guides I've seen expect you to know everything about the tree -- down to the shape of the twig and the branching pattern, which I generally don't know by the time I get home.

So I've been getting into tree identification, checking out books about trees, learning about different tree families and features, and skimming pages and pages of tree photos to find the ones I'm looking for.

There is this tree that's had me stumped (lol) for YEARS.  I always see it on highway medians.  It's tallish and very slim, and grows in big clumps of identical trees.  The leaves look rather tropical and feathery; I found out these are called compound leaves.  And there is this weird flower or fruit on top of the branches in red, brown, or green bunches.  Unfortunately I couldn't run it through any identifier guides because I had no idea what its branching pattern was, what shape the twigs were, or even any details about its leaves, because I only ever saw it while cruising by at 60 mph.

After many, many searches and tree lists, I found it in a list of trees with compound leaves.  It's called ailanthus! 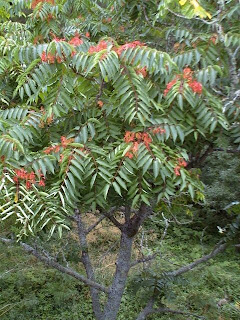 Later I was able to obtain a twig and discover that sure enough, if you snap off a leaf, it leaves a leaf scar in the shape of a heart.  It also smelled just a little bit like peanut butter, which is another clue.  Definitely ailanthus.  This area is riddled with them; apparently they are invasive.

Before I discovered this, though, I spent some time researching black walnuts and seeing if that was the mystery tree.  Black walnut trees look like this: 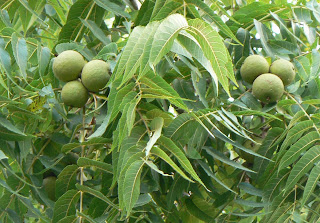 They're another very common tree around here, and they also have compound leaves.  But they tend to grow very large, not like the slender ailanthus, and they have walnuts of course.  The nuts tend to grow in pairs (or sometimes threes, like this one) and if there aren't any on the tree, there are likely to be shells on the ground.  They're quite good to eat, though it took a year of collecting them and wishing for a nutcracker before I had a brainwave and cracked the shells with a rock.  My paleolithic ancestors would be ashamed.

Another suspect, briefly, was locust.  This is also really common around here, more as an understory tree though -- usually smaller than ailanthus.  It also has rounder leaves and its fruit is a little bean pod. 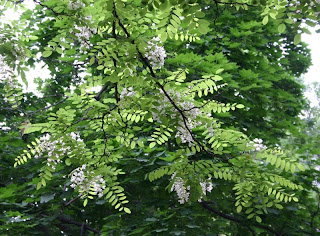 It's in the legume family, so it's handy to have -- it fixes its own nitrogen.  The pods are useful for animal fodder, or St. John the Baptist.  Apparently it was locust beans he was eating in the desert along with his honey, not grasshoppers.

My final discovery in the past few weeks has been the sycamore.  I saw a mention of it in a tree book, but flipped on past because I thought I'd never seen one of those.  Not a week later, I found myself by a creek with the kids, absolutely surrounded by them.  If you see that camo-looking gray bark, you know you've got a sycamore or one of its relatives. 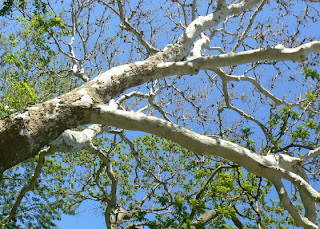 Now that I know what to look for, I'm seeing them everywhere.  Every time we cross a creek or river, sure enough, on the banks you see their very large maple-like leaves.  They're brighter green than most, so they seem to twinkle against the background of other trees.  And then in the winter, they're those white trunks I used to see without paying much attention.  They're dark gray and ridgey near the bottom of the tree, so you might not notice the white bark in the summer unless you're right underneath.

I'm very proud that Marko can now identify sycamore trees too, and declared his friend's spiky bouncy ball to look like a sycamore seed.  That's my boy!  It's one of my many homeschooling goals to have my kids able to identify the most common plants in our area.  But before I can teach them, I have to learn myself, and boy do I have a lot to learn.

Want to learn to identify the trees near you?  A few tips:

1.  Study up on tree terms.  The more you know, the more you'll notice about an unfamiliar tree, and the easier it will be to search for.  A bit of study has taught me to notice things about trees besides just leaf shape, like whether the twigs appear in pairs on either side of a branch (opposite branching) or a twig on one side followed a foot or so later by one on the other (alternate branching).  Since alternate branching is more common, if you find one with opposite branching, you will be able to narrow the tree down right away.  You can also find charts of leaf shapes with their technical names, so instead of googling "leaf-shaped leaf" you can try "elliptic" or perhaps "lanceolate."

2.  Look at the whole tree, not just the parts you find interesting.  This is frustrating to me, because if a tree has an interesting seed, for instance, I think I should be able to find it from that.  In reality, many tree guides expect you to know a lot of details about the tree in order to narrow it down.  If you have a notebook with you, you might want to take note of the following: branching pattern, twig shape, leaf scar, buds, flowers, fruit, bark, and roots.

3.  Look up trees when you're not looking for anything particular.  Do a search on trees native to your area and read up on a few of the most common ones.  Once you can recognize one, you start noticing them everywhere.  Then try searching for trees similar to that one, and you'll be able to pick out the differences.  Or get a tree book and see how many species look familiar to you.  Your local library is almost guaranteed to have several books on native trees.

4.  Image Search!  Sure, you can't look up an image and get a name, sadly.  (Though John tells me there is an app for that!)  But you can take a wild guess, do an image search, and find out if you're right.

5.  If the tree you're curious about is near you, visit it in spring and fall to see if anything new appears to help you out.  All trees do flower, though some flowers are very subtle.  Look closely for flowers in spring, and take note of its coloring in fall.  If you have already identified the tree, see if you can spot each stage of its flowering and leafing out.  Go look at it every day.  Get close and watch the leaves unfolding from the buds.

I don't know if any of you guys are into trees like I am.  But I think everyone should have a few favorite trees to keep an eye out for.  I get a crazy little "zap" of excitement every time I see an ailanthus, because it's my tree.  I'd know it anywhere, and that makes me very proud.

Your ailanthus looks a lot like a mimosa, which is one of my favorites since I moved to southern Missouri. I also met the magnolia tree down here. I love trees, too! And like you, I have often been frustrated trying to learn how to identify them. Great post!

Oh, I love mimosas! We have a small one outside our bedroom window, and our neighbors have a large flowering one. This year, when it goes to seed, I'm going to sweep up the pods that fall into the road, and perhaps start some baby mimosas in pots.

When I was a kid we had a magnolia, though not the kind they have down here. It had fuzzy leaves instead of shiny ones. But it smelled so delicious; I was in bliss every year when it bloomed.

I like acacia trees and balete trees! The best thing about balete trees is that everyone thinks they're haunted. ;-)

By the way, I think it would be interesting to sample 100 people and ask them all to draw the first thing that comes to mind when someone says, "leaf-shaped leaf." LOL!

Without a doubt, I love sycamores. There is a sycamore in front of my mother's house, where she grew up, and the home of so many innumerable memories. The tree is at least 90 years old, maybe older. To this day, seeing a sycamore makes me think of those memories.

But I also love pear trees and red maples, and oaks... and so many more.

E, I had never seen either of those trees, but now that I've looked them up, I very much would like to see them! What lovely trees! I can see why people would think the balete trees were haunted. Wikipedia mentions one that is 1300 years old and has bats living inside ... that would be a sight to see.

But of course now that I've been on Wikipedia to find out about balete trees, I wandered off to read about Filipino legends, and now I'm not sure I'll be able to sleep tonight! Creepy stuff!

SC, I love red maples too. When I lived in Rhode Island, I loved the fall when all the hillsides would turn bright red. Nothing like it.